Rotting food, cigarette butts, old furniture: these items litter the streets of Berlin — and reflect the mentality of the inhabitants of the German capital, thinks Gero Schliess. City cleaning efforts are laughable. 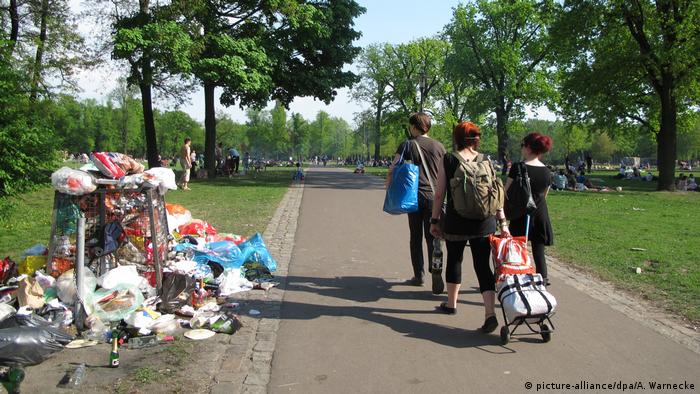 Each time when American friends of mine visit me in Berlin, they actually praise the city for its cleanliness. That's when I start to pity my pals. If they seriously think that Berlin is clean and neat, what on earth do the streets look like in their hometowns in the US?

Berlin's streets and bridges reek of urine, mountains of trash can be found in our parks. "Accidentally" forgotten debris, food remains in front of fast food restaurants, empty bottles and cigarette stubs in subway and train stations — my dear American friends, that's how clean the German capital really is. And it's only the start. 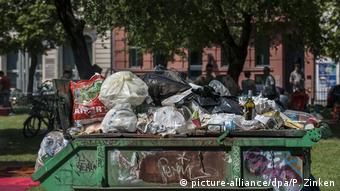 Berlin's dumpsters overflow onto its streets

But let's elaborate: "Now official news: Berlin drowning in bulky waste," the sensationalist newspaper Berliner Zeitung cried a few months ago, lamenting about dirty swine dropping old pieces of furniture and stinking mattresses just about anywhere. Well, yeah, you have to pay for trash removal in Berlin. And Berliners prefer to spend their money on Moscow Mules and other cocktails. Besides, aren't stained couches and mattresses an expression of Berlin's notorious nonchalance and sexiness? That much naïveté really gets on my nerves. Hey, Berliners, wake up, and grow up! Live out your pubescent side in the clubs, but please, not on the streets!

No tolerance for trash sinners

Berlin's bureacrats have zero-tolerance stance towards the perpetrators — at least, they act like they do. Their response to the trash problem is an oh-so very martial catalogue of fines. Whoever is caught for having left behind "mud-like substances," like excrement, gets away with a paltry €10-35 ($12-43) fine. So-called "insignificant products," like paper cups, tissues, cigarette packs, ashtray contents, or banana peels only cost you a mere €35. Burying household garbage is even cheaper by €5; you only have to shell out €30 for that.

The Berlin Senate, currently a left-wing constellation of Social Democrats, Greens and the Left, has come up with a rather notable idea to make the penalties better at detering people through fear. From now on, an army of 100 trash sheriffs is to restore law and order in the city when it comes to dirt and illegal waste. The Senate has decided to fund the project with €8.4 million per year over the next two years. 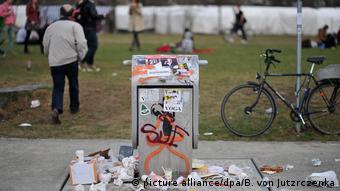 City efforts to punish those who litter have been ineffective

I think that's a lot of money for trash. Even more so when I consider the pathetic results of a similar, smaller-scale project that took place in the city district of Neukölln, which had much-feared trash sheriffs on patrol last year. They arrested all of 28 trash sinners  and dolled out fines totaling a laughable €6,800.

Inceidentally, Neukölln's former district mayor is Social Democrat Franziska Giffey, who has taken up a ministerial position in Germany's new grand coalition government amid much positive anticipation. Nevertheless, it comforts me that as family minister she won't be responsible for waste and its disposal.

Even Berlin's interior senator, Andreas Geisel, seems to have grasped how dramatic the consequences of not cleaning up Berlin's trash could turn out to be. Only recently, he spoke out sharply on what he calls "the dilapidation of Berlin's public space." In his view, this has become a serious security threat: Mountains of trash can distract attention from punched-in window panes. Should the interior senator therefore provide his forces with brooms and pans instead of with handguns?

What a crazy idea! But in Berlin, one that can's be ruled out — though it would be no more than just another cosmetic measure.

For now, let's confront the naked truth head-on. I believe the trash disaster reflects the mentality of the Berliners. Let's put it clearly: Chances are that the inside of Berliners' heads resembles the state of the city's squalid streets.

The Berlin mentality — laidback with delusional dreams of grandeur — may amuse us now and then. But it's not acceptable for those of us who expect functioning schools, a completed airport and halfway clean streets. If Berlin were a person, I would send it to a therapist. As this is not the case, the only thing I can do is to pin my hopes on Berlin's self-cleansing abilities, in the most literal sense of the words. So that Berliners' heads begin to get cleaned up. And so that I won't feel forced anymore to look the other way whenever American visitors praise the cleanliness of Germany's capital.

Many people have an idea what Berlin looks like. But how does it sound? DW columnist Gero Schliess had a listen. (18.02.2018)

Berlin 24/7: The price of freedom in Berlin

Many people come to Berlin in search of a liberating freedom. But those who haven't learned to deal with the consequences can pay a high price, says DW columnist Gero Schliess. (25.02.2018)

Berlin residents originally from the Rhineland who love to celebrate carnival have tried to import the fun and partying to the German capital — in vain, as DW columnist Gero Schliess observes. (12.02.2018)

Germans are known the world over for their virtues: efficient, reliable and always on time. But is all this actually a myth? Don't look for German virtues in Berlin, says columnist Gero Schliess. (31.12.2017)

Berlin 24/7: Komische Oper continues to reinvent the musical after 70 years

With the successful staging of "Fiddler on the Roof," the Komische Oper celebrates its 70th anniversary. For DW columnist Gero Schliess, the smallest of the three Berlin opera houses is particularly inspiring right now. (10.12.2017)

Berlin 24/7: Put a stop to shopping malls in Berlin!

There are 67 shopping malls in Berlin — far too many, says columnist Gero Schliess. To him, these buildings are symbols of artificial consumption that are ruining Berlin's character. His cry: Stop the mall madness! (17.12.2017)

Berlin is in turmoil. DW columnist Gero Schliess fears that the terror attack on the Breitscheidplatz Christmas market and the recent anti-Semitic protests have had a destructive impact on the city. (23.12.2017)

Six people were injured, three of them severely, in the incident. Police have arrested a 30-year-old man in connection with the crashes while prosecutors have alleged the incident was an Islamist-motivated attack.