Berlin 24/7: World religions gather in Berlin's House of One

Berlin has a dream: the House of One. It's intended to serve Christians, Muslims and Jews alike as a place of prayer and teaching. A fantastic idea, says DW columnist Gero Schliess. 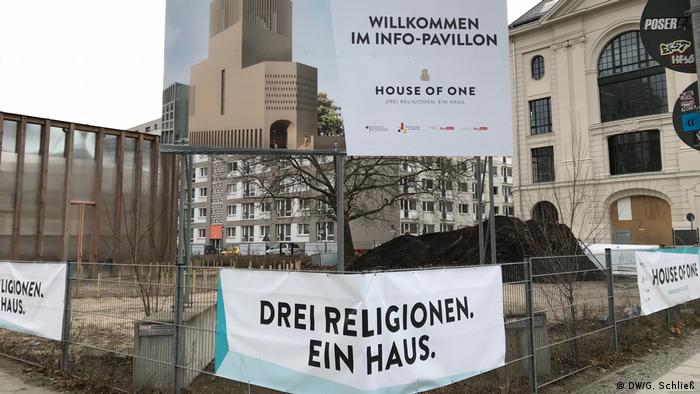 This utopia isn't impressive at first glance. Pieces of wood are scattered among construction debris on a stretch of barren land. It feels more like a shabby shack than anything else.

Each time I pass by this odd spot while biking from Leipziger Strasse in direction of the Philharmonie I come across the words "House of One" written on a banner hanging on a construction fence, accompanied by the explanation, "House of the three religions."

The idea behind all this is as appealing as the "building" itself is odd. The plan is to bring the world's three big monotheistic religions, Christianity, Islam and Judaism, together. It's so to speak a church, a mosque and a synagogue at once. A priest, an imam and a rabbi are to pray here right next to each other. A piazza with a roof on top is to serve as a meeting ground for them and their communities. 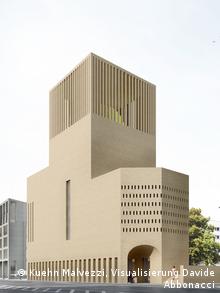 The architects's visualization of the House of One in Berlin

The piazza is already visible, if only as a model. However, "multi-religious meditations" are already taking place in this provisional wooden construction that I can see from a distance. The initiators organize them here mainly as a marketing tool for donations, as there isn't enough money to realize the project yet.

So far, a total of  8.8 million euros have been donated, but a total of 43 million euros is needed. Some of the donors have posted a message on the website of the House of One. Some link the project to the current political climate: "During these times of right-wing populism, it's particularly important that religious institutions keep working together," writes Alexander Relea-Lindner from Germany. Others see the project as an opportunity to find unity in religion: "More than ever before, the Abrahamic religions should share a common place of prayer. May this be the starting point for numerous Houses of One!" writes Sara Berry from the US.

In the name of their religions, Christians, Muslims and Jews have always fought against each other — with conflicts ongoing to this day, especially in the volatile Middle East where Islamist terrorism has killed thousands of people. Berlin has also experienced Islamist terrorism firsthand, when 12 people were killed by a truck at a Christmas market in 2016. 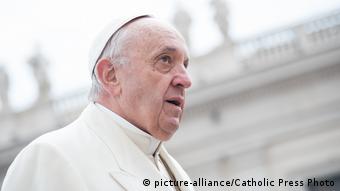 The project has been praised in the Pope's official newspaper, L'Osservatore Romano

On the first anniversary of the attack, an interreligious memorial service, with a Protestant and a Catholic bishop, an imam and a rabbi praying side by side, aimed to send out a strong signal against terror. I'll never forget that.

Could a unified religion bring peace and happiness?

The House of One also aims to bring religions together, under one roof. There's a lot of applause for that idea. Even the Pope's newspaper, L'Osservatore Romano, has praised the "innovative project." 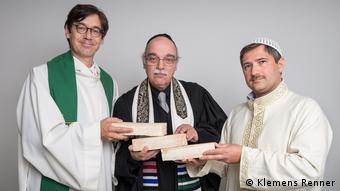 Is there room for hope that a super religion is evolving in Berlin? Will a unified religion bring peace and happiness?

It reminds me of the play "Nathan the Wise" by Gotthold Ephraim Lessing, in which a Jew called Nathan tries to promote equal rights for the three monotheistic religions.

But what about a super religion? Nathan couldn't possibly have been so naive. Neither are the project's initiators of the Protestant parish St. Petri. They simply want to create a "house of prayer and interdisciplinary teaching" with the aim of strengthening peace between different religions.

That's why the parish put the Petri square in Berlin's oldest part, the Spree island, at the disposal of the project, more precisely, the spot where the Petri church once stood until it was torn down in 1964, as it was severely damaged during World War II.

But not everybody approves of the interreligious initiative. Some people have expressed scepticism, among them the author of an article in the Berliner Zeitung who refers to the "illusion of a dialogue between the religions."

What's true is that two of the project's main collaborators are perceived as outsiders within their own religious communities: the Abraham Geiger Kolleg, a rabbinic seminary at the University of Potsdam and, even more so, the Forum für interkulturellen Dialog, which belongs to the controversial Gülen sect which, following political events in Turkey, is strongly rejected by many Turkish Muslims.

Isn't it likely that this connection will make dialogue even harder? But who said that bringing the three religions together would be easy? It's after all a utopia, and not a finished concept. I at least hope that the project will attract a growing number of people, and that the house will one day open up to the more than 250 different religious communities in Berlin.

Crazy? Perhaps. Nevertheless, I'll keep my fingers crossed for this utopia even if, right now, it still looks as fragile as the shack on Petri square.

Berlin 24/7: The price of freedom in Berlin

Many people come to Berlin in search of a liberating freedom. But those who haven't learned to deal with the consequences can pay a high price, says DW columnist Gero Schliess. (25.02.2018)