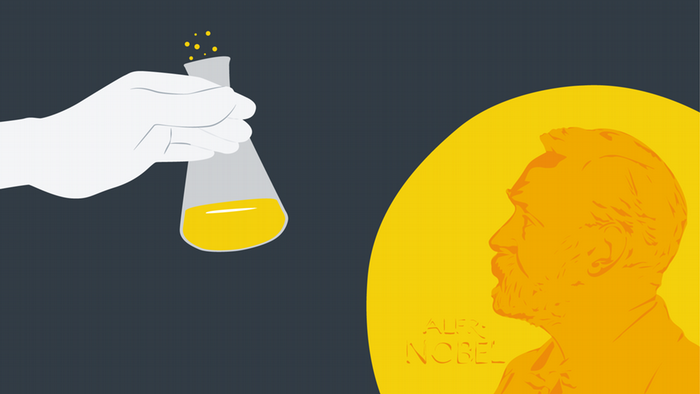 This year, the Nobel Prizes for science present an all-male line-up. Like the awards in Medicine and Physics earlier this week, the Nobel Prize in Chemistry was awarded to male scientists.

While organocatalysis might sound complicated, it's exactly the opposite: it makes the job of chemists easier, cheaper and greener. 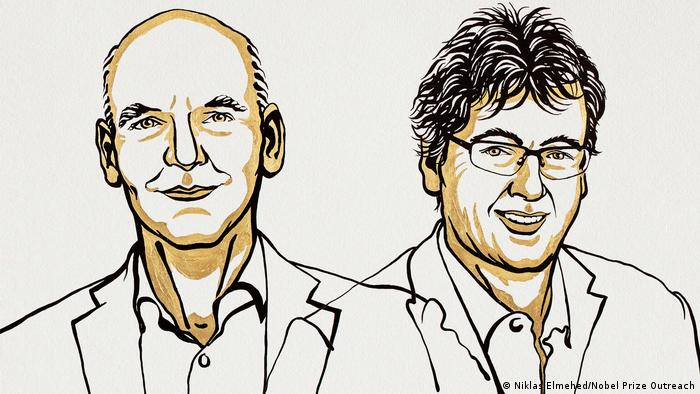 What did they do?

Chemists build molecules, which then make up much of our surrounding world: they capture light in solar cells, form lightweight running shoes or inhibit the progression of disease in the body. Because of this, many of our industry and research areas depend on the ability of chemists to construct molecules.

But to construct molecules chemists need a catalyst — a tool for controlling and accelerating chemical reactions. Researchers long believed that there were just two catalysts: metals and enzymes. In 2000, that changed: List and MacMillan developed a third catalyst which builds on small organic molecules, called asymmetric organocatalysis. Their organic catalyst is both environmentally friendly and cheap to produce.

"This concept for catalysis is as simple as it is ingenious, and the fact is that many people have wondered why we didn't think of it earlier," said Johan Aqvist, chair of the Nobel Committee for Chemistry.

DW’s science editor on the Nobel Prize for Chemistry

No catalyst for change

Predicting who will win the Nobel Prize is famously difficult, as both the short list and the nominators are kept secret from the public. Yet, one aspect of the Committee's decision comes as little surprise: this year's winners for the scientific Nobel prizes are all male.

Earlier this week, the Nobel Prizes in Physics was awarded to three men and the prize for Medicine was given to two. Today's award ceremony stayed true to the trend.

While List and Macmillan discovered this new type of catalyst independently from one another, in a sense, they did it side-by-side: Coincidentally, they had the brilliant idea almost simultaneously in 2000, while working in the same corner of the world.

List was conducting research at the Scripps Research Institute in southern California and MacMillan was in Berkeley when their organocatalyst was born.

Since then, organic catalysts have transformed from a newcomer to a staple in chemists' tool boxes.

The Nobel Committee for Chemistry described the development of this type of catalyst as "a gold rush, in which List and Macmillan maintain leading positions."

The rapid expansion of the catalysts in chemistry research is due to their ability to drive asymmetric catalysis. Often when new molecules are being built, two molecules that are mirror images of one another form.

In many cases, chemists will only need one of these molecules, particularly when producing pharmaceuticals. With organic catalysts, researchers can produce large volumes of different asymmetric molecules, instead of two of the same kind.

Organic catalysts have not only made chemists more efficient, they've also provided a green alternative for molecule production.

Many catalysts involved in producing new molecules rely on heavy metals, which can contaminate the environment.

Organic catalysts are more environmentally friendly than their metal counterparts. They have a stable framework of carbon atoms, to which more active chemical groups can attach. These often contain common elements such as oxygen, nitrogen, sulphur or phosphorus.

The catalysts are also a greener option because they can work on a sort of conveyor belt. Before 2000, a lot of chemical substances were lost during the chemical construction process of molecules, because each intermediate product had to be isolated and purified.

Organocatalysts are much easier to work with: with their help the production process can be carried out in an unbroken sequence. With less interference in the process, less chemical waste is produced. 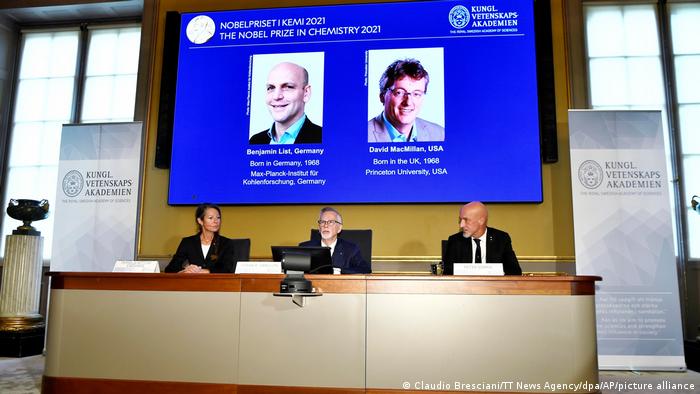 The 2021 Nobel Prize in Chemistry was announced from Stockholm, Sweden

Who are the new laureates?

Benjamin List is the second German scientist to receive a Nobel prize this week, after climate scientist Klaus Hasselmann was awarded the Nobel Prize for Physics yesterday.

List, 53, is a chemist and the director of the Max Planck Institute for Coal Research in Mülheim an der Ruhr, Germany.

Scottish-born David MacMillan, also 53, is a professor of cat Princeton University in the US, where he was also the chair of the department of chemistry from 2010 to 2015.

Chemistry was the most important science for Alfred Nobel — the originator of these prizes — and his achievements. That goes for the development of his own inventions as well as the processes he introduced into industrial production — it was all based on chemistry. As such, chemistry was the second area of fundamental research that Nobel mentioned in his testament and will.

Chemistry is the third and final science award in this week of Nobel Prizes.

The week began with Physiology or Medicine on Monday. That was won by David Julius und Ardem Patapoutian for the discovery of human receptors for temperature and touch.

On Tuesday, one half of the Physics prize was awarded to climatologists and meteorologists Syukuro Manabe (Japan) and Klaus Hasselmann (Germany), and the other half went to Giorgio Parisi (Italy) for research on complex systems.

Later in the week, there will be Nobel Prizes for Literature, Peace, and then Economic Sciences.

The Nobel Prizes are in their 120th year. And over that time, it's nurtured a reputation as being both secretive and rigorous. It very often awards its accolades to more than one person but a maximum of three.

And while many scientists might quietly hope to get the recognition of a Nobel Prize one day, some say it's good enough to have one's work associated with a Nobel Prize and let other scientists be the "victims" who sacrifice themselves and "bear all the burden of media hype to be there for a good cause."

That was Karsten Danzmann's take when in 2017 the Physics Prize was awarded to the LIGO (Laser Interferometer Gravitational-Wave Observatory) for observing gravitational waves. Danzmann was involved in that work, as were about a thousand other scientists, but only three of them were named.

And the Committee is tough: If in any year it thinks no nominees are worth it, they reserve the right to let the prize money rollover into the next year.

This year's winners receive cash prize of 10 million Swedish Krona (about €980,000), a Nobel Medal and a range of other trinkets.

But they will have to wait until December 10, because tradition also has it that the prizes is handed out at a gala dinner in Stockholm.

Thirty rare elements have been identified as critical for the future of industry. Some of them have a colorful history.