Vocal protests from sponsors, rights groups and politicians led the Belgian soccer association to end its work with rapper Damso. The musician is known for lyrics glorifying violence and the abuse of women. 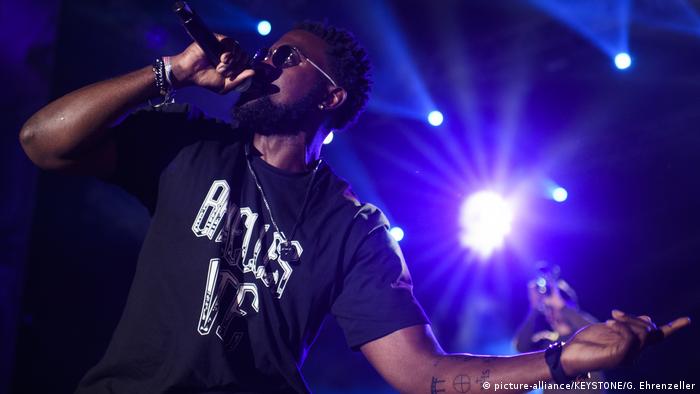 The Royal Belgian Football Association canceled plans on Friday to have a rapper write the country's World Cup song, following public pressure over the artist's extremely violent and misogynistic lyrics. The organization apologized "to all people who felt offended, discriminated against or undermined."

Many countries heading to the World Cup in Russia this summer will have official theme songs meant to showcase the nation's cultural talents, serve as warm-up music and feature in advertising campaigns.

Congolese-Belgian musician William Kalubi, better known by his stage name Damso, has courted controversy with songs that repeatedly refer to violence against women and make crude references to their anatomy. He further infuriated Muslims with a line in a 2015 song that called Muslim women sluts "who wear headscarves."

In the same song, titled "Pinocchio," he refers to women as "whores" and suggests forcing them to perform degrading sex acts.

Despite advocating violence and the abuse of women, the football association stood behind their decision on Wednesday, when they issued a statement defending Damso.

The statement described Damso as the "proud father of a little daughter." The letter also accused the country's women's council of "taking advantage of our media coverage to create a controversy," a comment that garnered heavy criticism online.

Lawmaker: Lyrics border on the illegal

Belgium's secretary of state for equal opportunities pointed out on her Facebook page, "If anyone did this on the street, he'd be prosecuted." A law was enacted in 2014 that criminalized verbal street harassment.

According to The New York Times, the football association claimed it was being "taken hostage" by the controversy.

In its statement on Friday, the organization said it would "draw the necessary lessons for the future in order to convey our positive values with even greater conviction."

Germany's top police authority has found evidence that Islamist terrorist groups may target the 2018 World Cup in Russia. The agency also pointed to Russia's hooligan scene as a source of violence. (06.03.2018)

Sexual harassment scandals and the #MeToo movement in the US empowered women to reveal assaults in the European Parliament. Has it helped to create more accountability in the Brussels bubble? Teri Schultz reports. (08.03.2018)

The Funke media group says 234 cases of sexual harassment have been reported in the German armed forces. The Defense Ministry said the rise is due to heightened sensitivity and increased reporting of suspected crimes. (27.01.2018)