Ever since November's attacks in Paris, Belgium has been stereotyped as a hotbed of terrorism. Several cities are trying to prevent young Muslims from being radicalized. 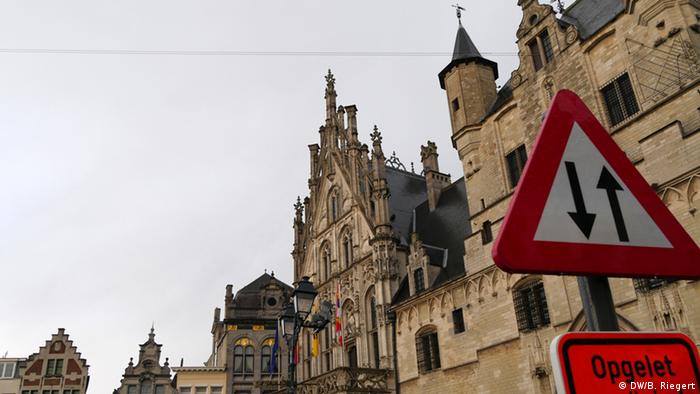 One day after his 18th birthday in June 2013, the young man secretly left Antwerp for Syria to join "Islamic State" (IS). Fatima, his mother, spent days wondering where he had gone until she found the letter in which he revealed his intent to journey to Syria.

"Then I told the family that my son had gone to Syria," Fatima told DW. "The moment was like a funeral for me. I said to myself, 'He's dead. He has gone to war.' It's really hard. I will never see him again." About two months ago, Fatima received her most recent brief message from her eldest son "I never noticed that he had joined radical Muslims," she said. "Not at all."

Youths who go to Syria put a heavy burden on their families and their social environments, said Moad el Boudaati, a social worker from Vilvoorde, a small town near Brussels. Twenty-eight young men from Vilvoorde are known to have joined IS - thought to be the highest total per capita for any municipality in Europe based on the number of Muslim residents. Boudaati said every young Muslim in Vilvoorde knew someone who had had a family member go to war in Syria. His own best friend was killed there.

In 2014, Vilvoorde launched a project to counter the radicalization of young men and boys. Since then, the number of departures to Syria has dropped to zero. Boudaati said people involved in the project were trying to help young people find work and meaning at home in Belgium, as well as to understand the true word of the Koran, rather than Salafist interpretations. "The mosque community admits its mistakes," Boudaati said. "In the past, it did not pay attention to young people's needs. Now they offer courses on religion. If you admit your mistakes, you can make changes."

Not a single young man from the town of Mechelen, roughly 15 kilometers (9 miles) from Vilvoorde, has gone to Syria or Iraq to join a terror group. The municipality implemented its anti-radicalization programs before any other city in Belgium did. "You have to detect the early stages in people who lean towards radical, extreme ideas," Mayor Bart Somers said. "Then you have to find people whom they trust and with whom they talk to in their milieu. People must not be isolated. The system works much like a cult, and indeed attempts are made to isolate the victims from their families. We want to help re-establish a connection to society."

Police are part of Mechelen's strategy. Chief Yves Bogaerts works in a community policing network that attempts to assess people's susceptibility to radicalization. Officers go to the homes of young people deemed at risk or haul them to the station for questioning. "What we are lacking are police officers from the Muslim population," Bogaerts said. He has stepped up efforts to recruit police from Islamic backgrounds. The anti-radicalization program is not limited to Muslims: Mechelen's police are also on the lookout for young people at risk of being recruited by neo-Nazi and other right-wing groups.

"We must understand that this is not a battle against religion, but an ideology," Somers said. "Dangers are lurking in every corner. It is a political battle between two sides: One is humanitarian and democratic, and the other is totalitarian. We must fight for the minds and hearts of our young people."

Somers said mosques were assisting the city's efforts. "We foster an open and trusting relationship," Somers said. "The mosques in my city are working hard to prevent radicalization. And, most importantly, I try not to view the people as Muslims but instead, as citizens of my city."

Though no other Belgian city has seen such a high percentage of young men leave as Vilvoorde has, several have also not had the success combating radicalization that Mechelen has. Almost 500 Belgians have gone to fight in Syria for one side or another, and many of them have returned - or intend to. "That is a danger, of course," Bogaerts said. Many of those who have returned are believed to gather in the larger cities, such as Brussels and Antwerp. Communities like the Molenbeek district in Brussels recognized such dangers far too late and are now lagging behind in the battle against terror. "It is still easy to go into hiding in Brussels," said Bogaerts.

Today, two and a half years after her son left for Syria, Fatima works in anti-radicalization programs. "It is not easy for me," she said. Although she fears for her now-20-year-old son's life every day, she also wants him to know that what he did was wrong - and that it hurts. In a telephone conversation shortly after his departure, she told him that he was nearly dead to her. "He replied that he had done it for me because, if he were to die, we would meet again in heaven," Fatima said. "I told him: 'I'll personally take you to hell. In Islam, you must obey your parents. You make me very sad.'"