Three men detained after raids in Brussels have been released without charges. Four raids took place, but no arms or explosives were found, according to a spokeswoman for the Brussels prosecutor's office. 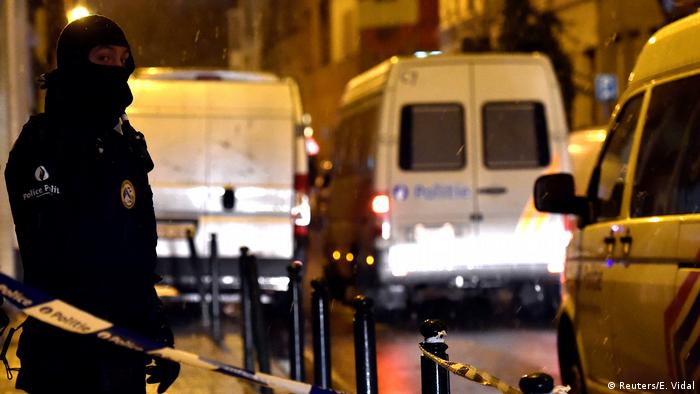 In the wake of the Brussels attacks, Belgium is suffering an image problem. A new government media campaign hopes to change that - but will it be enough? Martin Kuebler reports. (23.05.2016)

The terror attacks in Brussels have sparked a bout of soul searching about integration in both Belgium and France. Elizabeth Bryant reports from Molenbeek and Sevran. (05.04.2016)

Explosives found in Belgium raids as world reacts to attacks

Belgian authorities have confirmed a nationwide manhunt for a suspect who fled a Brussels airport after his suicide belt failed to detonate. The day after the attacks, newspaper front pages revealed a world in horror. (23.03.2016)

On Sunday, police released three men captured in much-publicized raids in the Brussels district of Molenbeek after determining that there was nothing to charge them with. Late Saturday, prosecutors said police had fruitlessly searched several houses in relation to an anti-terror investigation.

"The searches were carried out as part of an investigation by Brussels prosecutors," spokeswoman Ine Van Wymersch said on Saturday. "While nothing was found, three people were taken in for questioning."

No details have emerged since the men's release. What is known is that the raids took place late evening, with armed police reportedly setting up a security perimeter during the operation after carrying out house searches related to an anti-terrorism investigation. The area was closed off to traffic as special police forces with machine guns moved in, the news agency Reuters reported.

Molenbeek was home to some of the men who killed 130 people in multiple attacks in Paris over the course of an evening in November 2015, as well as the suicide bombers whose detonations at the Brussels airport and a metro station last March killed 32 people. Investigators say the same cell carried out both attacks, and prosecutors have charged about 20 people in Belgium in connection with the killings in Paris. Police have raided several residences in the district since, but have often failed to produce evidence or contraband - as appears to have again been the case on Sunday.