Explosives found in Belgium raids as world reacts to attacks

Belgian authorities have confirmed a nationwide manhunt for a suspect who fled a Brussels airport after his suicide belt failed to detonate. The day after the attacks, newspaper front pages revealed a world in horror. 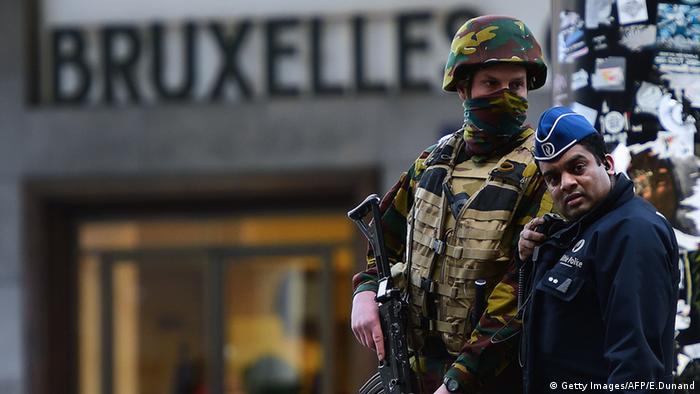 The front page of Wednesday's Financial Times eschews some of the more gruesome sights seen in Brussels in the wake of terror attacks that left at least 31 people dead. Three men, calmly pushing trolleys in Zaventem Airport, about to detonate suicide belts in an act of carnage claimed by "Islamic State" (IS) terrorists.

Not all went according to plan, however - only two of the three sets of explosives went off, leaving the third suspect the subject of a massive manhunt across Belgium that was still underway early Wednesday morning, authorities confirmed.

Police conducted a series of raids across the country throughout the night, and prosecutors confirmed that an IS flag, chemicals, and a bomb had been found in one location.

The International New York Times gave a glimpse of what innocent travelers endured as the bombs tore through the check-in hall of the airport, sending bodies and shrapnel flying:

Le Soir, a French-language Belgian newspaper based in Liege, centered instead on the enormous outpouring of solidarity with the victims and their families as citizens of Brussels gathered in the Place de la Bourse square for a candlelight vigil overnight.

World leaders echoed this sentiment, with German Chancellor Angela Merkel saying "we will work in every way with his government and the Belgian security forces to find those responsible for today's crimes, detain and punish them."

Speaking on a visit to Cuba, US President Barack Obama also voiced his sympathy with Brussels, ordering US flags to be lowered to half mast and promising to send FBI investigators to assist in tracking down those responsible for the "outrageous" violence.

The tragedy in Belgium came just a few days after the arrest of Salah Abdeslam, the logistical mind behind a series of suicide bombings in Paris in November that killed 130 people. After months of searching, Abdeslam was found in the Molenbeek neighborhood of Brussels, where he had grown up, and which had been the subject of a series of police searches in the aftermath of the Paris attacks.

Cruz on Brussels: Police should 'patrol and secure Muslim neighborhoods'

On the heels of terrorist attacks in Brussels, Ted Cruz has promoted boosting police presence in places where Muslims live. As two more state primaries got underway, his rival Trump blamed immigration for the violence. (22.03.2016)

Across Europe famous landmarks are lighting up the night sky in a display of solidarity with the residents in Brussels. The illumination of the Belgian flag in Paris, Berlin and Rome is a display of unity against terror. (22.03.2016)