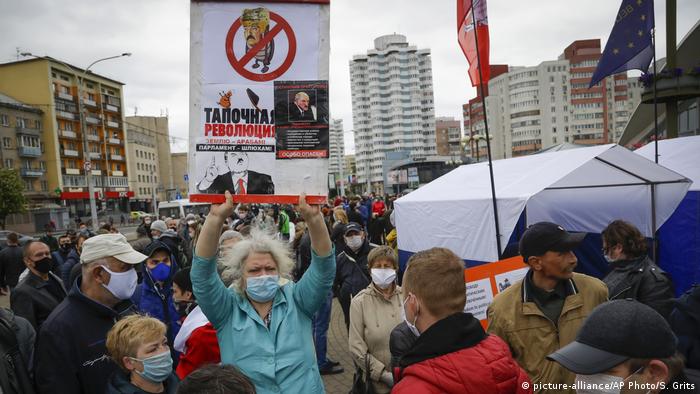 Belarusian President Alexander Lukashenko said Monday that authorities will outlaw protests until the upcoming election and he will never allow a revolution to occur. Local media reported that prominent opposition figures were arrested following anti-government demonstrations in Minsk at the weekend.

"We will never allow destabilization of the situation in our country," Lukashenko said. "We don't want any 'color revolutions' here," he added, referring to a sweep of revolutions in the Balkans and worldwide in the early 2000s.

The strongman leader has led the former Soviet state for 25 years and has been described as Europe's last dictator owing to his tight hold on power and allegations of widespread corruption at the highest levels of government.

Lukashenko is seeking re-election to a sixth term as president on August 9. Presidential term limits were abolished in a 2004 referendum. Opponents say he should be banned from running; Lukashenko described opposition groups as "bands of criminals."

Demonstrations have been ongoing for several weeks since Lukashenko confirmed he will be running for another term. Independent media reported Sunday that prominent opposition leader Mikola Statkevich was arrested at a demonstration.

Statkevich was sentenced to 15 days in police detention, as dozens more activists were held across the country, charged on a variety of counts.

Statkevich was found guilty of organizing an unauthorized rally, AFP reported. He was jailed for six years in 2010 after opposing Lukashenko in presidential elections.

Rights groups have also denounced the arrest of popular political video blogger Sergei Tikhanovsky on Friday. He was accused of violence against a police officer, which supporters say was police persecution.

Lukashenko said it would be impossible for a revolution like in Armenia or Ukraine to overthrow the existing government.

"We don't have any Pashinyans or Zenskiys," he said Monday, referring to Armenia's Nikol Pashinyan and Ukraine'' Volodymyr Zelenskiy, claiming that Belarus' opposition lacked such caliber. "I've become closely acquainted with them. They're talented people."

The president also dismissed the idea of a female president last week, telling a crowd "We'll have a man for president."

Belarus has hit headlines globally during the coronavirus pandemic as one of the few countries not to introduce any kind of restrictions on public life. Lukashenko dismissed coronavirus as a "psychosis" and has said that fresh air and hard work are the best cures.

The Eastern European country has reported over 43,000 confirmed cases with 230 people dead, though health experts say they believe that cases may have been under-reported.

The start of the presidential elections campaign in Belarus was marked by a harsh crackdown on journalists and bloggers. Analysts and human rights activists believe that the authorities will go on with repressions. (15.05.2020)

Russia and other former Soviet states have marked 75 years since the end of World War II. Ceremonies were subdued — with one exception. Belarus pushed ahead with a huge military parade in Minsk. (09.05.2020)