Top Lebanese officials had been warned about the dangers of chemicals stored in the port yet failed to act to prevent the tragedy, according to a report from Human Rights Watch. 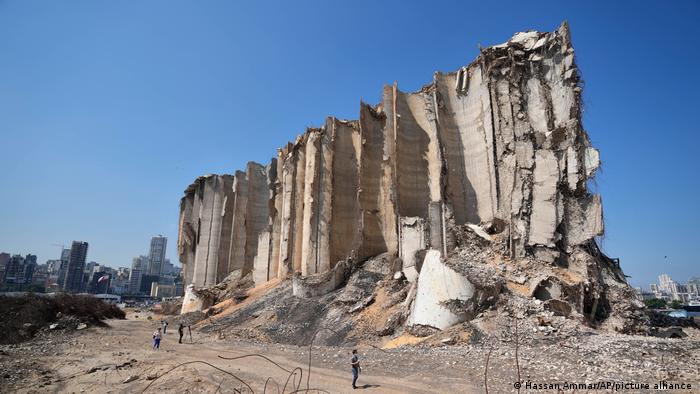 Lebanese officials knew about the risks of hazardous chemicals in Beirut's port but did nothing to prevent the blast, Human Rights Watch (HRW) said in a report released on Tuesday.

The report comes as Lebanon marks one year since the explosion killed more than 200 people and devastated the capital.

HRW said that several "Lebanese authorities were, at a minimum, criminally negligent under Lebanese law in their handling" of the ammonium nitrate shipment that was brought to the port in 2013.

"Evidence strongly suggests that some government officials foresaw the death that the ammonium nitrate's presence in the port could result in and tacitly accepted the risk of the deaths occurring," the report said.

Who is implicated in HRW's investigation?

The report, titled "They Killed Us from the Inside: An investigation into the August 4 Beirut Blast," identified several senior individuals in the government, customs, the army and security agencies and accused them of negligence.

HRW based its report on documents and multiple interviews with top officials, including the president, the caretaker prime minister and the head of the country's state security.

According to the report, then-Prime Minister Hassan Diab first started receiving reports of the ammonium nitrate shipment in June 2020. "I then forgot about it, and nobody followed up. There are disasters every day," HRW quoted Diab as saying.

The Lebanese army also "took no apparent steps to secure the material," despite knowing that the shipment's nitrogen grade was classified as material used to manufacture explosives, the report said.

According to a document seen and cited by Reuters news agency, the Lebanese president was also warned about the security risks.

What about the local investigation?

A Lebanese probe into the blast has stalled, with politicians and senior security officials yet to be questioned. Requests to lift their immunity have been hindered.

"Lebanese authorities have spent the past year shamelessly obstructing victims' quest for truth and justice," Amnesty said in a statement.