The self-taught drummer anchored one of the greatest bands of all time with his solid beats, quirky fills and down-to-earth persona. As he turns 80, Sir Ringo is celebrating with a live benefit concert.

"Ringo Starr isn't even the best drummer in the Beatles," is the legendary quote attributed to John Lennon that continues to define the legacy of the Liverpudlian musician who joined the Fab Four in 1962.

Known for his "silly fills," Starr's unorthodox style (due, he says, to being left-handed but playing a right-handed drum kit) is also often praised as a key source of the Beatles' unique sound ⁠— ironically, he was also the drummer on John Lennon's first solo record. Often voted among the top drummers of all time, Rolling Stone wrote that "Ringo didn't just ground the greatest band of all time, he helped give their music shape and focus."

Meanwhile, though inevitably overshadowed by the songwriting duo of John Lennon and Paul McCartney, Starr is still playing live and putting out solo records (some 20 at last count) at the age of 80.

Born Richard Starkey on July 7, 1940, in Liverpool's Dingle district, the Beatle wrote an autobiographical song about his poor, working class upbringing called "The other side of Liverpool."

"My mother was a barmaid, at the age of three my father was gone," he sang on the 2010 track from the Y Not album. "Only way out of there, drums, guitar and amp." 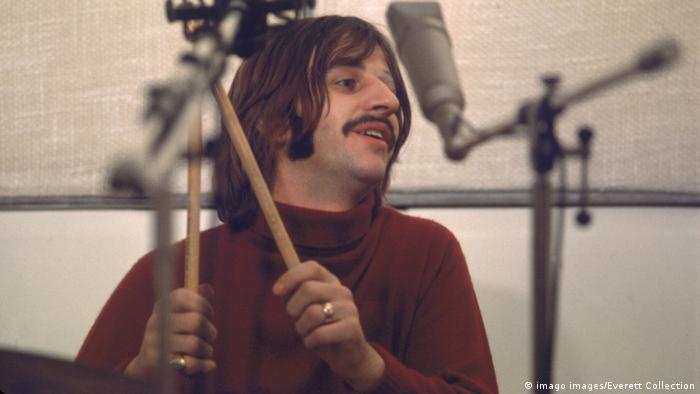 Drumming took him out of poverty: Ringo Starr in the early 1970s

Not only growing up in poverty, he struggled through several long hospitalizations due to ill-health. But though he struggled academically, he had a talent for drama and performance and soon chose music over a career as a machinist, for which he had undertaken an apprenticeship.

Starkey had formed his first band at the age of 15 and was drumming with Liverpool group Rory Storm & The Hurricanes when in 1962 he was on tour in Hamburg and met the Beatles, who were already gaining fame. John Lennon, Paul McCartney and manager Brian Epstein then decided that Ringo Starr, which was already Starkey's adopted stage name, would be a better fit for the band than current drummer Pete Best. 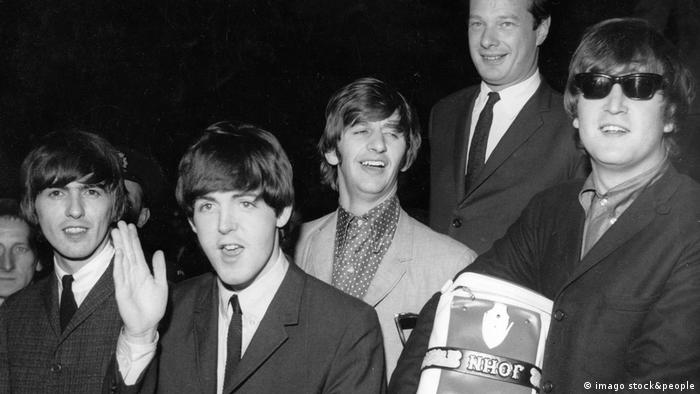 The Beatles in 1964 with their manager Brian Epstein

In August 1962, Starr got the Beatles gig and the rest is history — even if some fans did not take kindly to the move, shouting out at a Cavern Club show, "Pete forever, Ringo never!"

Starr's quirky style would remain central to the signature Beatles sound until the band broke up in 1970. He also occasionally sang lead vocals, most notably in Yellow Submarine and With a Little Help from My Friends; while also acting as the down-to-earth counterweight to the growing tension between Lennon and McCartney that precipitated the band's demise.

The fact that the drummer also contributed to the Beatles' work as a songwriter is often overlooked. He composed the song "Don't Pass Me By" soon after joining the band, though it wasn't recorded until 1968 for the White Album.

His song "Octopus's Garden" appeared on the 1969 Abbey Road album and was inspired by a trip to Sardinia in August 1968 on the yacht of his friend, the actor Peter Sellers. Starr had fled there because he had had enough of the strife within the band when recording the White Album. 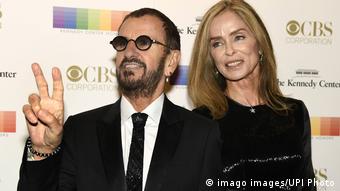 With his wife Barbara Bach

After the separation of the Beatles, Starr came up with his first solo album in 1973, Ringo, on which the ex-Beatles guested as musicians. It was to be the zenith of his solo career, both commercially and musically.

Starr also tried his hand at acting, and during the shooting of the Stone Age comedy, Caveman, in 1981 met actress and ex-"Bond-Girl" Barbara Bach, who became his wife. He had earlier divorced Maureen Cox in 1975, with whom he had three children.

Parallel to Starr's artistic decline in the 1980s was a dependence on alcohol and other drugs. "I don't know how you do anything if you're not drunk. That's where I ended up. I couldn't play sober, but I also couldn't play as a drunk," he said in 2019. He went into rehab and by 1989 had a comeback with his supergroup, Ringo Starr & His All-Starr Band, featuring the likes of Joe Walsh from The Eagles. 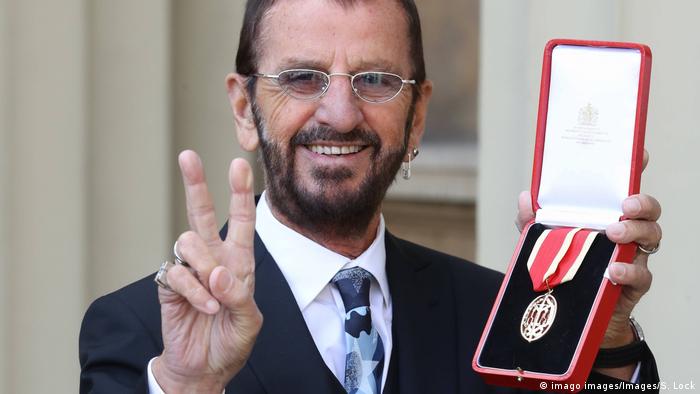 With his Knighthood medal in 2018: You can now call him 'Sir' Ringo Starr

Starr has long been involved in charitable activities and benefit concerts, including in 1985 with his son Zak as part of the Artists United Against Apartheid. For this and for his life's work he was knighted by Prince William in 2018.

Airing on Ringo's YouTube channel, the show will include home performances and never-before-seen concert footage from Starr, Paul McCartney and Joe Walsh as well as Sheryl Crow, Sheila E and Ben Harper, among others.

"As everyone knows I love gathering with fans for peace and love on my birthday," said Starr. "But this year, I want everyone to be safe at home — so I called up a few friends and we put this Big Birthday Show together so we could still celebrate my birthday with you all, with some great music for some great charities."

Hosted on location at Ringo Starr's home in Beverly Hills in Los Angeles, the show starts at 5 p.m. PST, and at 2 a.m. on July 8 in Germany.

The Beatles were a foursome, but these five people have been labeled the "fifth Beatle" at some point. They were producers, friends of the band - and one even has a very tragic story. (16.09.2016)

'Peace is Power': Yoko Ono's works on show in Leipzig

She is arguably the most hated woman in music history. Yet Yoko Ono is not only John Lennon's widow, she also stands alone as an artist. Her works spanning five decades are now on show in Leipzig. (03.04.2019)

Ron Howard's Beatles documentary contains never-before-seen footage of the Fab Four on tour. "Eight Days a Week - The Touring Years," released 50 years after the band's four-year nonstop tour, shows why they broke up. (14.09.2016)