Not since losing 3-0 to Dortmund at the end of last season had the all-conquering champion been exposed so ruthlessly. The 4-1 result in the first BL match of 2015 puts daylight between second-placed Wolves and the rest. 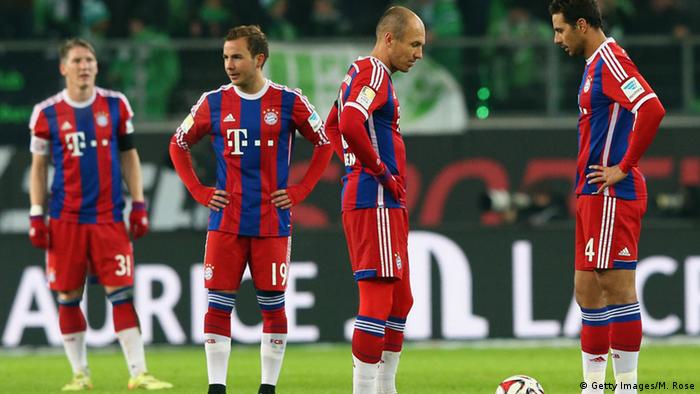 Bayern Munich was beaten in the league for the first time since April 2014 as Wolfsburg’s players paid the perfect tribute on Friday to the late Junior Malanda.

Bayern had only conceded four league goals all season, but they surrendered as many in 90 minutes to a Wolfsburg team clearly inspired by the pre-match respects given to their former teammate.

Dutch striker Das Bost with two first half goals and Belgian playmaker Kevin De Bruyne with a brace in the second period did the damage for Wovles, which moved nine points clear of Leverkusen in third ahead of a full Bundesliga program on Saturday and Sunday.

"We played a great game," Wolfsburg coach Dieter Hecking told ARD television. "To beat Bayern you need a day like this. Everything we had planned worked out."

The home side made a dream start as Bayern were caught on the break in only the third minute.

Daniel Caligiuri sliced open the away defense with a slide rule pass to De Bruyne and the Belgian did what he does best: feeding his teammate Bost who slid the ball into the corner past Manuel Neuer. It was De Bruyne's 11th assist this season - the most of any Bundesliga player. 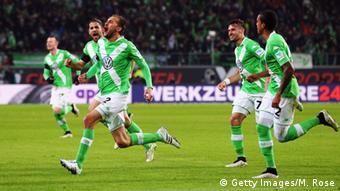 Bayern pressed forward as the game enjoyed a frenzied opening period. But with the visitors committing players to attack, Wolfsburg was able to counter at will and was most effective through the dangerous raids of De Bruyne.

Bayern appeared to lose a shade of discipline as cheap fouls were given away by Dante and Schweinsteiger before a clearly frustrated Xabi Alonso was booked for a push on Wolfsburg's Maximilian Arnold.

The Spaniard received his yellow after a center circle scuffle involving several players from both sides.

Bas Dost and De Bruyne do the damage

With Bayern seemingly holding on for half-time, Bas Dost shinned a volley from the left center of the area onto the far post and into Neuer's goal. The German international 'keeper was caught flat-footed as he appeared unsighted by his defenders.

De Bruyne was again targeted for some rough treatment after the restart but no Bayern player could get near him in the 53rd minute, when the 23-year-old raced the length of the opposition half to fire past Neuer for 3-0.

Bayern pulled the deficit back to two goals in its next attack, when Juan Bernat bundled the ball home.

But on the hour-mark the momentum was back with Wolfsburg, with Arnold firing over the bar when it looked easier to score. 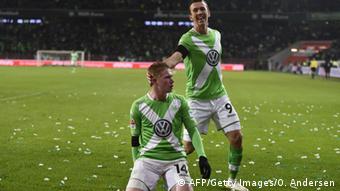 Kevin De Bruyne made one and scored two in the rout

And in the 73rd minute with Bayern looking for a way back into the match, De Bruyne again found himself racing clear from the halfway line. With only Dante for company, the Belgian made enough space to lash an unstoppable drive into the roof of Neuer’s net from 10 meters.

Bayern dominated possession in the final ten minutes, but the Wolves defense held firm to seal its most impressive win of the season to date.

A one-minute applause was held before the match in memory of Junior Malanda, the Wolves player who died in a car accident on January 10.

"We discussed the issue with our fans and came to the mutual conclusion that we didn't want silence," said Wolfsburg sporting director Klaus Allofs. Instead, he said, they had wanted "to hear applause and love, to pick up where the funeral in Belgium left off in celebrating Junior's life."

The game proved to be the perfect tribute to the 20-year-old Belgian.