DW: As a German living in Germany, what are your thoughts when you see the current events in the United States?

The images shock me. Some of the things on social media at the moment are brutal. And unfortunately, the protests are also taking on a difficult form. Nevertheless, the case of George Floyd shows us just how widespread racism against black people is in America, and the role racial profiling plays. I find it extremely upsetting because I’m often in America myself and I like the country and the culture a lot. But it’s nothing new; it’s something which is omnipresent. Racism is found everywhere, but it is extreme in the USA.

I read a good quote recently: It’s as if racism is a dark room and, every now and then, someone turns the light on and everything is revealed.

When you think how much African-Americans have done for the image and culture of the United States, I find it inexplicable. And I’m only thinking of sport, fashion and music. Barack Obama as President was also a defining figure.

Do you see any parallels with Germany?

Of course racism is a topic here as well, it’s very present. In recent years, we’ve seen attacks on foreigners and different religious groups in Germany. All in all, things are traveling in a certain direction where I think: we were once further along.

During my childhood in Berlin, I also had experiences with racism, of course. But I also remember my time on the football pitch, where it didn’t matter where you came from or what religion you were. We were Iranians, Africans, Turks, Germans. We didn’t really think or talk about it. It was all about being together. 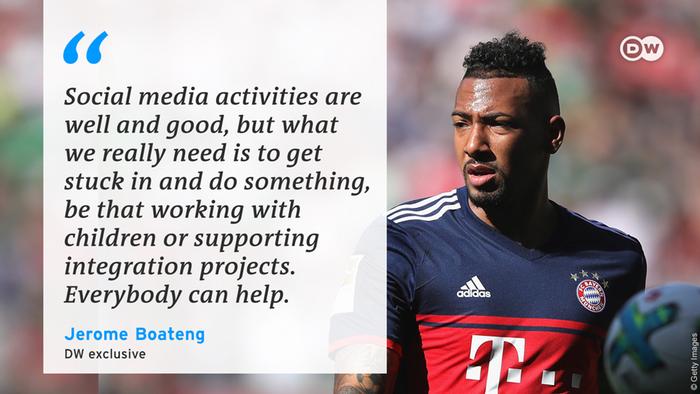 Jerome Boateng, in conversation with DW

Do you think that Afro-Germans are acknowledged and visible enough in Germany?

Generally speaking, people of African heritage are underrepresented in certain areas. Although, I often get the impression that sportspeople are the ones who do get the recognition.

But I don’t want to malign everything: fundamentally, I think Germany is an open country. Personally, I’ve had a lot of good experiences, too. There are countries in Europe where it’s a lot worse.

In today's world, do you think that athletes and sportspeople should be activists, too?

Our voices are heard, we have a platform and we have reach. But I think it’s important that it’s not just limited to social media. Initiatives like Black Out Tuesday are all well and good but what we really need is to really get stuck in and do something, be that working with children or supporting other integration projects. Everybody can help.

I personally would definitely like to do something in this area in the near future. There are already various suggestions and ideas.

Many black footballers have spoken out about recent events. But what could your white colleagues do to support them?

Not every white athlete who doesn’t speak out right now is a racist. Of course not. When I watch videos of demonstrations, I see people of all skin colors. But of course it would be desirable if they used their fame to support this cause. Many do, but I think there’s still a lot of room for improvement.

Is there anything that I have not asked, but which is important to you and which you would like to say?

Everything begins with the education of children. That’s the most important thing. No child in this world is born a racist. It's up to the parents and what they tell their children.

The worst thing that could happen would be for my children to experience such things. It’s vital that we teach them that racism isn’t acceptable and that, should they see someone being abused, they should defend them and speak up. That has to start in school. It has to be an integral part of the curriculum. Only in that way can we make progress.

Born in Berlin in 1988, the son of a German mother and Ghanaian father, Jerome Boateng honed his skills on the city's streets before coming through the ranks at Hertha Berlin, making his first professional appearance for the club in 2007. Following spells at Hamburg and Manchester City, the central defender joined Bayern Munich in 2011, for whom he has since made 313 appearances and won seven Bundesliga titles, four German Cups and the 2013 Champions League. Boateng was a mainstay in the German national team between 2009 and 2019, making 76 senior appearances and starring in the side which won the World Cup in Brazil in 2014. He was named German Footballer of the Year in 2016.

The interview was conducted by DW's Jonathan Harding.