On a trip just north of Munich, Bayern sealed their latest Bundesliga title. After a slow start, it was plain sailing for Jupp Heynckes' men as Bundesliga title number 27 was secured. 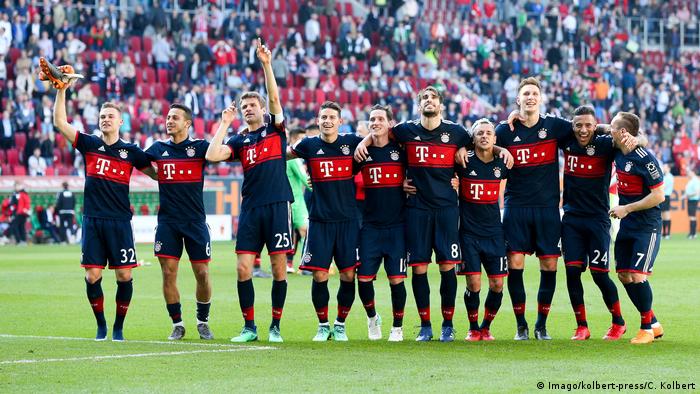 A comical own goal from Niklas Süle threatened to spoil the party for the visitors — the ball clattering in off the defender's face after Jerome Boateng's slip let Augsburg in. But the home side's positive start was little more than that, as Bayern turned on the style after the opening half an hour.

Joshua Kimmich crossed for Corentin Tolisso to head in before Kimmich delivered a low ball six minutes later that James smartly tucked away at the far post. The devastating double all but ended Augsburg's attempts to spoil the party. In the second half, Arjen Robben smashed home a half volley after the home side only half cleared a free kick. Late on, Sandro Wagner headed home from a corner to get the celebrations in full swing.

It was Bayern's 27th Bundesliga title, their 28th German championship and Jupp Heynckes' fourth as Bayern Munich head coach. The visiting fans cheered on as Bayern's players came over to celebrate with the away block afterwards, and although Heynckes admitted to having a glass of champagne in the changing room there was still a sense he and his team are hunting for more glory before the season is over.

Re-live the game as it happened:

-- Jupp Heynckes has been chatting to Sky: "It's not just me that deserves credit, it's the whole team."

On champagne: "We just had a glass in the changing rooms with some nice music."

On the title: "It wasn't obvious when Peter Hermann and I arrived... The players deserve a lot of credit for their efforts."

On Robben: "Today it was clear how brilliant a footballer he is, contributing to the win with his performance."

On returning to the job: "Sometimes you have to return to the job and I felt that. Everyone in the team knows their job and there's so much trust with one another, particularly in the coaching team."

On celebrations: "We won't celebrate. Everyone can enjoy themselves. For some it's the eighth, like Ribery, for some it's the first... For me as a player it was the most important title."

Heynckes: "I'd like to send special greetings to Italy and Carlo Ancelotti for his involvement in this and congratulate him on this title. I think he's a great coach and a great person."

-- Arjen Robben to Sky afterwards: "If we're honest, we knew it was coming but we still needed to deliver and the feeling afterwards is great... From outside, everyone said they have the best team but you still have to do it."

When asked about his future: "I think it's going to be a good month. I trust the head coach... Everything is possible. It's important to enjoy it and keep the focus on the football... When all the options are on the table, I'll make my decision."

-- Ribery speaking to Sky after the win: "It's a special moment. Today we're champions again and it's so important for us. At the start of the season, we work so hard to get this feeling with the fans."

"When Jupp came back, you saw what an impact that made on the team and how we play for each other."

When asked about whether he would celebrate his birthday, Ribery said: "I would like to, but it doesn't matter. We are pros. I'll have dinner with my family tonight."

-- Heynckes now applauds the fans and then sends Ribery and Robben forward for their own special applause. Arm around them. He recognizes their efforts across the years. What a man. What a moment for Bayern fans.

-- Ribery tries to hang the cardboard cutout of the Bundesliga trophy on Heynckes, but he says no. Instead the coach goes round and thanks every player with a handshake and a hug. Classy man.

-- Robben and Ulreich give their jerseys to fans in the stands. Ribery does the same, and sends a kiss to the crowd. The players are wearing red t-shirts with a white number six on. A simple message. Six straight Bundesliga titles. Dominance.

-- There are hugs all round and the Bayern players head over to their fans to celebrate. They've started a conga with a cardboard cutout of the Bundesliga title being held at the front by Juan Bernat. A moment to enjoy for these players, even if there are bigger goals ahead.

87' — GOAL! 4-1 Bayern Munich (Wagner) The striker rises highest from a corner to nod home a fourth, his ninth this season. Can't say the move was a bad idea now eh? The icing on the cake, as a tough afternoon for Augsburg turns into a rough one.

81' — There's time for Franck Ribery to come on and perhaps even add a goal to a Bundesliga title. What a day the Frenchman will have - it's his birthday too! Couldn't pack more in if he tried. Thomas Müller is on too (Robben).

77' — Rudy breaks and is clear of the defense, but his attempt to square it to Wagner to make it four isn't perfect and Hitz gobbles up. Waste, but I'm sure they won't mind.

75' — Robben nearly adds a second, but Hitz claws out his free kick. Will anyone else get involved in the party?

71' — And so, like much of the season, we wind our way to a conclusion we have long known. Javi Martinez comes on for James, who was fantastic (again). A little early celebration dance on show there from Bayern's subs. Jupp Heynckes eh? What a man.

65' — CHANCE! Should be 3-2 but Ja-choel Koo heads wide with Ulreich rooted and Bayern's defense nowhere. That would have made things tasty for the final 25, but as it stands Bayern will try and play this one out.

62' — GOAL! 3-1 Bayern Munich (Robben) That is the Bundesliga title ladies and gentlemen! The free kick from the resulting foul is cleared, but not fully and eventually the ball comes out to Robben who slams it home inside the near post. A bit of shin there, but it's Robben and so that means it's still pretty amazing. Party time for Bayern and their fans!

56' — Wagner dummies for Tolisso, but his shot is blocked. Feels a bit like Bayern are toying with Augsburg here. As if they know a third goal is coming, but they just haven't decided how and when to score it yet.

50' — Update from elsewhere: A blow for Cologne. Mainz have equalized thanks to a Pablo de Blasis' header. The hosts really need a win to keep the dream of survival alive.

48' — Bayern start on the front foot, Robben sneaks in behind the back line but is just offside. One more goal for the visitors and they can get the title t-shirts out.

Well, the home side played most of the football for the first half an hour and got a goal for their efforts, but it was all Bayern for the last 15 minutes and they have two goals for their troubles. Simple game really. Just 45 minutes away from the title now Bayern (as it stands).

42' — Augsburg aren't happy. Not sure why, but they've dropped off quite a bit from that opening 30-minute spell. Marwin Hitz has to make a strong save to deny Bayern a third. Daniel Baier clips Kimmich late, talks to him with an angry face but doesn't avoid a booking. The home side keen for the interval right about now.

38' — GOAL! 2-1 Bayern (James) What a lovely goal. Kimmich with a lovely nutmeg on the right, and then delivers a low cross that Bernat flicks with his heel for James to run on to and pass in at the near post. Just beautiful play. Get the party music back on!

36' — Kimmich tries to squeeze between two defenders in the box, goes down, but no penalty. Would have been very soft...

32' — GOAL! 1-1 Bayern (Tolisso) Not that long it seems. Kimmich drifts wide and Corentin Tolisso finds him. By the time Kimmich floats in a cross, the French midfielder is there, unmarked to meet it with his head. All square. Great movement by Wagner to drag the defense apart, but Augsburg still won't be happy.

31' — Augsburg have a free kick left of center, around 10 yards from the edge of the area. Perfect for Jonathan Schmid, but he whips it well over. A bit of a waste, but so far Augsburg have done well at unsettling Bayern. The question, as ever, is for how long?

26' — Finally a flowing attack from Bayern, but Bernat can't bring down Robben's cross at the back post. Feels a bit like a run around on a Sunday so far. Perhaps the sun has Bayern smiling too much before the task is done.

21' — Boateng is unhappy. Clipped by Michael Gregoritsch (booked), he gets a free kick but he's probably still reeling from that error because his frustration gets him a yellow. Bayern need to settle here.

18' — GOAL! 1-0 Augsburg (Süle o.g.) A funnier goal you won't see all day. Jerome Boateng slips, Cordova puts the pressure on and wins the ball (not great viewing for Boateng). Sven Ulreich makes the save, but the rebound smashes off Niklas Süle's face and goes in. Süle knows nothing about it, but Augsburg lead. Incredible.

17' — CHANCE! Philipp Max plays a lovely one-two and is perhaps a fraction offside, but the flag stays down and he curls an effort onto the post.

14' — Mats Hummels is warming up. Bernat just can't catch a break it seems. He chats to Jupp Heynckes (probably in Spanish) on the sideline and then is back on. Determined.

11' — Juan Bernat takes a knock. He could do with a good afternoon after that confidence burning evening in Sevilla midweek. Jogs on but then is on the ground in pain. Not a good sign. Then Sandro Wagner knocks the wind out of Rani Khedira and shakes his finger at the foul given against him. Classic Wagner.

7' — Augsburg get in behind Bayern's defense again, but are offside. Some goals elsewhere in the Bundesliga already this afternoon, with drama in the relegation zone as Cologne take an early lead (Jonas Hector) against Mainz and Wolfsburg are ahead in Freiburg (Daniel Didavi).

4' — Rafinha with a sloppy pass lets Augsburg in, but they can't take advantage. Caiuby flashes wide shortly afterwards. A warning for Bayern?

1' — Bayern in dark blue and with Arjen Robben as captain watch as Augsburg get the game underway in the sun.

-- Back in 2013 when Bayern won the treble, they sealed the Bundesliga title in Augsburg as well. It was 3-0 back then. An omen for today?

-- The teams are in! Bayern with, perhaps as expected, as a slightly second team. Although looking at those players, I'm not sure if they really count as "second team" players. Philipp Max will be hoping to be the best wingback on the day though (even if Joachim Löw isn't impressed enough to take him to Russia).

-- Welcome, welcome! The sun is shining and so might the Bundesliga trophy later on today. Bayern can seal the title with a win - or even a defeat if Schalke don't win against Hamburg later on. So chances are, we'll see Bayern celebrating later on today - although Augsburg will do their best to spoil the Bavarian party. Follow the action here or on Twitter @dw_sports.