Bayern Munich have beaten RB Leipzig 3-0 in the German Cup on the back of goals from Robert Lewandowski and Kingsley Coman. Bayern thus secure the league and cup double, despite their shaky start to the season.

Bayern Munich faced a lot of questions going into the German Cup final. But perhaps the biggest was whether it was wise to bring Manuel Neuer back into goal after his difficult season and his injury troubles.

Neuer answered this after just 10 minutes, raising up a right hand to palm away a close-range header from Yussuf Poulsen. RB Leipzig couldn't have known it at the time, but this would prove one of their few clear-cut chances all night. Neuer was on hand again right after half time to deny Emil Forsberg in a one-on-one.

"I would have ideally liked to play a game before this one. But you couldn't have scripted it better," Bayern's 33-year-old keeper and captain told ARD after the game.

Leipzig had the upper hand for most of the first half, but struggled to convert their dominance into chances.

Bayern, meanwhile, were merciless — none more so than their lethal number 9 Robert Lewandowski. The Pole's first goal was one of the toughest headers imaginable, off balance and falling away from goal, but he placed it well out of Robert Gulasci's reach. In the dying minutes, he showed his goal-poaching instincts, pouncing on a defensive error by Dayot Upamecano and coolly chipping Gulasci to put the result beyond doubt.

As an added bonus the Pole's brace moved him up to seven goals in the German Cup this season, making him the competition's top scorer at Pierre-Michel Lasogga's expense.

Kinglsey Coman, influential in creating Lewandowski's first, scored one of his own in style late in the second half. This demonstrated that Kovac's had the right answer to another difficult pre-game question. Rather than honoring club heroes Franck Ribery and Arjen Robben, Kovac opted for youth on the flanks, starting Coman and Serge Gnabry. In the second half, with the game decided, then the renowned "Robbery" duo came on to replace their successors on the wings. 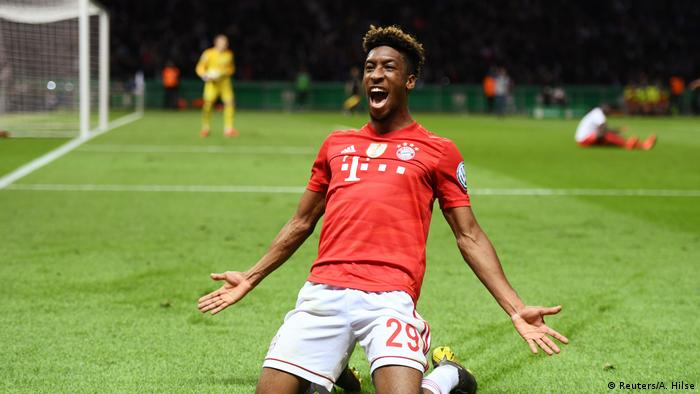 Coman was involved in creating the first, and scored the second all by himself

Domestic double for Bayern, no first trophy for RB

Having secured the league on the last day, Niko Kovac can now claim a domestic double in his first season in charge. It's Bayern's 19th Cup triumph, from just 23 final appearances, and their 12th domestic double. But in a telling sign that not everything has gone right on Säbener Strasse this season, star defender of recent years Jerome Boateng watched the entire final from the bench and then did not join his teammates as they celebrated in Berlin's Olympiastadion. Expect him to wear a different jersey next season.

RB Leipzig's first major trophy will not come in the new franchise's first decade as the new force in German football — but you get the feeling there may not be long to wait. 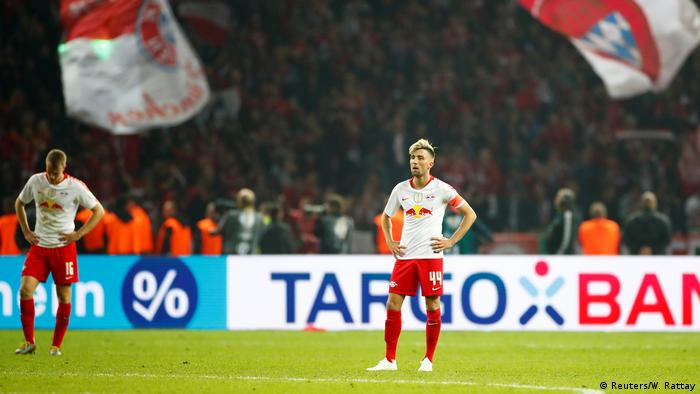 FULL TIME. Bayern Munich win the 2019 German Cup, their 19th, and secure the domestic double in Niko Kovac's first season in charge. Hands up who would have predicted that in November!

90+3' Sabitzer blasts the ball into the wall. That is probably that.

90+3' Some brave late attacks from Leipzig as they seek a consolation goal. Now, a free kick in shooting distance might prove their last best chance.

86' Franck Ribery subs on for Coman. A French farewell replaces the French future.

85' GOAL! Lewandowski again. A long Bayern clearance puts Upamecano in a tough spot and the Pole pounces, winning the ball and racing clear. Lewansdowski waits and watches Gulasci as he approaches goal, picking his moment to lift the ball over the onrushing goalie with his weaker left foot. World class finish, even if he never should have had the chance in the first place.

85' Hello, Francky! Ribery warming up on the touch line. Coman likely to make way. And now he can.

79' Phew, hang on... That goal has gone to VAR for a review. Lewandowski may have fouled Leipzig's Konate off the ball.

78' GOAL! Kingsley Coman! Does that wrap it up? Joshua Kimmich's cross takes a big deflection and Koman reacts first to the loose ball. His first touch both brings the ball under control and takes the last man out of the equation, then he finishes emphatically with his left.

73' Arjen Robben comes on for Bayern, replacing Gnabry. Surely, SURELY, Ribery is next?

70' Bayern recently brough Corentin Tolisso on, for his first game since September, to replace Javi Martinez. Now Leipzig bring on Upamecano for Willi Orban. This frees Leipzig up to move to a back three and go for broke, with Halstenberg taking up a more advanced position in wide midfield.

63' Now it's Thomas Müller having a pop from distance. Shot blazes high and wide. 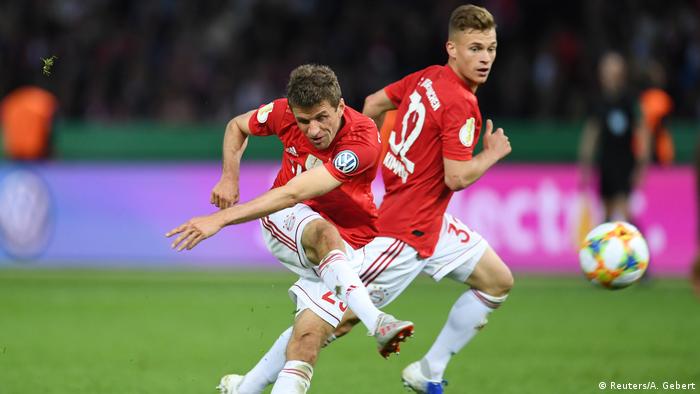 62' Mats Hummels strolls forward, Leipzig watch him advance without reacting. Hummels decides why not, and pulls the trigger, but Gulasci saves. Seconds later, Gulasci is in action again, deflecting a cross from the right into the path of Gnabry, who heads off target from close range.

56' Robert Lewandowski pulls the trigger after a promising Bayern move. However, not only does Gulasci gather up the ball with ease, it later transpires that the linesman had raised his flag; the goal would not have counted.

50' Bayern's fans have taken the opportunity to protest against the DFB (the German FA) with banners reading "Scheiss DFB" and another pointing out that the cheapest ticket for the final was 60 euros ($67).

48'  Another top save from Neuer. Emil Forsberg clean through on goal after a great ball from Konate. One heavy touch approaching the goal lets the Swede down. Neuer charges out and deflects the ball first with his leg and then his arm, putting the ball behind for a corner. 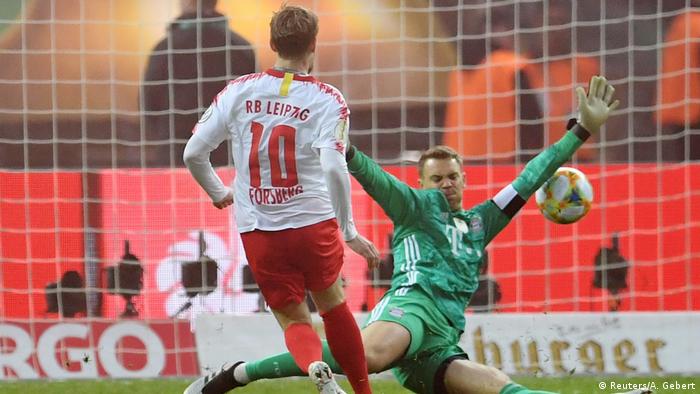 He's been out for months, but Neuer's rolled back the years in the final

HT analysis: Leipzig dominated much of the opening half hour, creating one clear-cut chance. Bayern then had the upper hand for the last 15 minutes, carving out about half a dozen scoring chances. Attacking efficiency has so far been the main difference on the pitch. Even Lewandowski's goal, an exceedingly difficult placed header while falling away from the goal, was an example of making the most out of only half a chance. Ralf Rangnick and co. may find some half-time solace in Bayern's defensive fragility over the course of this season; clean sheets have not been the Bavarians' forte.

44' All hands to the pump in Leipzig's penalty area! Lewandowski nearly adds a second after build-up work from Müller and Gnabry. Moments later, from the ensuing short corner routine, Mats Hummels makes contact with a low cross from Müller but Gulasci saves. Rangnick and Leipzig might at one point have felt aggrieved to be trailing; now, 1-0 is looking charitable as half time approaches.

42' Off the line! Konate to the rescue for Leipzig. Mats Hummels springs the offside trap, sending Kingsley Coman clean through. Koman rounds Gulasci and fires the ball goalwards, only for Konate to sprint back in front of goal and head the ball to safety. That could, probably should, have been 2-0.

32' Leipzig had looked in complete control for most of the first half hour. Then the Bundesliga's deadliest player of the decade struck.

29' GOAL! Robert Lewandowski! Bayern overload the left flank. Kingsley Coman waits for support from Alaba on the overlap and feeds the Austrian. Alaba's cross left Lewandowski with a lot of work to do. Jumping away from goal to reach the ball, he redirects it calmly past Peter Gulasci at his near post. Lewandowski, with six, is now the joint-top goal-scorer in the Cup. Peter Gulasci had no chance in Leipzig's goal

24' Timo Werner set free down the inside left channel. Neither Hummels nor Süle in central defense have the pace to deal with that for Bayern. But cue Joshua Kimmich, who rescues the situation with a perfectly-timed slide tackle.

21' Leipzig have probably had more of the ball and territorial supremacy of late. Ralf Rangnick, eying his second German Cup as a coach, looking satisfied on the sideline.

11' What reflexes from Manuel Neuer to deny Yussuf Poulsen. The man who was a doubt with injury before the game, with many calling for Sven Ulreich to start in his stead, gets a glove to a close-range Poulsen header from a corner. He palms it up and over the bar, Bayern can breathe again. 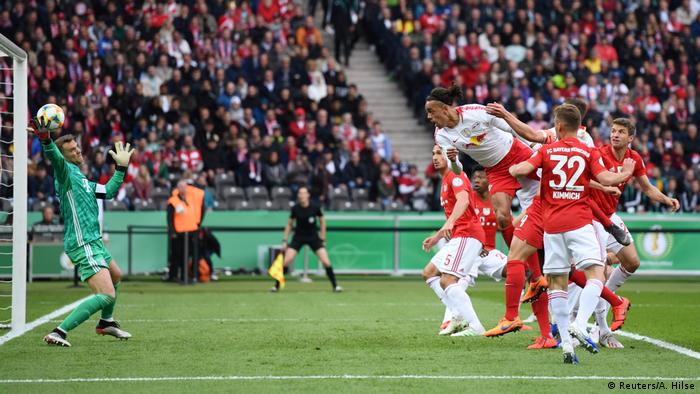 Manuel Neuer's right hand to the rescue against Poulsen

5' Bayern in red shirts, white shorts and white socks — Leipzig in white shirts, red shorts and red socks. Honestly, it's a tad confusing at first glance, even for the teams themselves, it seems!

3' First chance to Serge Gnabry down the right flank. He makes space for himself in the box and fires wide with his left foot.

19:50 T-minus 10 minutes! There's another award up for grabs in the final, perhaps. Hamburg's Pierre-Michel Lasogga is currently top scorer in the DFB Pokal with six goals. He can't improve on that tally, but Robert Lewandowski (the bookmakers' favorite to score first tonight) has five to his name, so far...

19:15 It's a short run to the German Cup final, just five matches for the top teams, in a country that makes sure its sides don't overload with fixtures. We've taken a look at how each team made it this far. If you're expecting a dominant romp to the final from Bayern, think again. Remember them shipping four goals against lower league Heidenheim?

19:09 Leipzig's team is out in the mean time too. As you'd expect it's brimming with attacking options, with Yussuf Poulsen, Timo Werner, Kevin Kampl, Marcel Sabitzer and Emil Forsberg all in the first XI.

18:52 The team sheets are out. Bayern's outgoing stars Ribery and Robben both start on the bench, with the next generation of Gnabry and Coman on the flanks. But don't be surprised if the "Robbery" tag team is on the pitch before the evening's done:

18:42 There's 78 minutes to go until kick off at 8 p.m. local time in Berlin. Expect starting lineups from both sides shortly. Will Bayern start both Franck Ribery and Arjen Robben for their big send-off?

18:25 Another statistic in Bayern Munich's favor tonight is their hit-rate in the cup final itself. Bayern have won the competition 18 times, despite only reaching the final on 22 occasions. Can Leipzig add a fifth defeat to their tally?

18:09 Niko Kovac's career DFB Pokal record as a coach is pretty stunning. In 17 games, he has 16 wins, three of them in penalty shootouts. That's led to three finals in three years; the sole defeat (so far, at least) was at Dortmund's hands in the 2017 final.

Meanwhile, the competition's English language account has a simple message for tonight's competitors:

17:48 Also noteworthy in Saturday's final is Franck Ribery's farewell after 12 years with Bayern Munich. The furious Frenchman would surely love to cap his swansong with a goal and yet another piece of silverware.

17:45 Bayern Munich's Niko Kovac could win back-to-back German Cups, having thwarted his future employers last season with Eintracht Frankfurt. Yet, bizarrely, the domestic double might still prove too little for Bayern to stick with their coach, after a challenging first season in charge. Matt Pearson has more:

German Cup: Niko Kovac could make history but still have no future

17:20 Welcome to our rolling coverage of the 2019 German Cup final in Berlin. RB Leipzig are hoping to celebrate their 10th anniversary with their first piece of top-tier silverware. Now there's just the small matter of beating the Bundesliga powerhouse Bayern Munich to claim the trophy.

Janek Speight, who will be in the Olympiastadion for us tonight, has the lowdown on Leipzig's cup ambitions: