Bayern was in free-scoring mood in its Champions League round of 16 second leg game on Wednesday. Six different players found the net as the Bavarian equaled its record with a 7-0 win to progress to the quarterfinals. 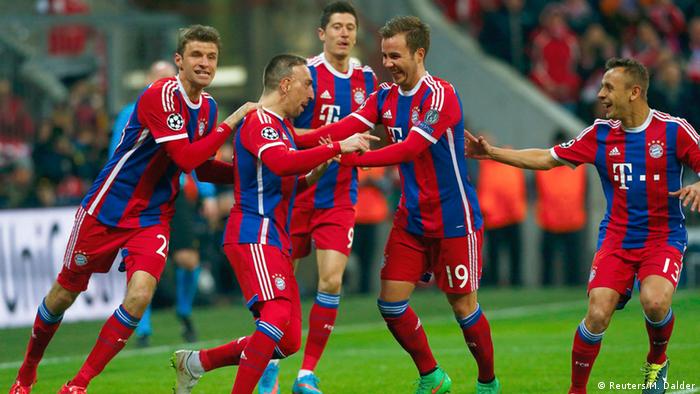 Bayern Munich coasted into the quarterfinals of the Champions League on Wednesday after running in seven goals against a Shakhtar Donetsk side reduced to ten men after only four minutes.

Bayern had overcome the second half sending off of Xabi Alonso to earn a 0-0 draw in Ukraine, but this time Pep Guardiola's side enjoyed the numerical advantage following the early dismissal of Oleksandr Kucher for his sliding challenge in the area on Mario Götze.

Contact between the two looked minimal, but Scottish referee William Collum pointed to the spot and Müller stepped up to convert his 25th goal in 65 Champions League games.

With the game effectively killed as a contest, Shakhtar were pushed back into their box by a rampant Bayern. Further goals were added through Jerome Boateng before half-time, and through Franck Ribery, Müller, Holger Badstuber, Robert Lewandowski and Mario Götze in a hopelessly lop-sided second period.

Even when Bayern lost Arjen Robben after 18 minutes to what looked like a problem with his left hamstring, the home side was ruthless in making the extra man count. 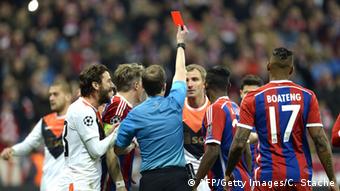 An unmarked Lewandowski hit the post with a header from a Rafhina cross midway through the half, while Müller was also left alone to head straight at Andriy Pyatov on the half hour.

The scale of Bayern's dominance, however, was exemplified by the goal for Boateng on 32 minutes. With red and blue shirts crowding the Shakhtar area, the center back was free to tap in at the back post after a Lewandowski strike was only palmed into his path by Pyatov.

The second half began in the same fashion as the first, with Bayern again scoring after four minutes when Franck Ribery played a neat one-two with David Alaba and slotted home.

All remaining hope for Shakhtar was extinguished two minutes later as Müller converted, following more good work down the left by Ribery.

Holger Badstuber headed in for 5-0 on the hour before Lewandowski made it six with 15 minutes still to play. The Polish striker side-footed home after Bastian Schweinsteiger had found him with a superb 60-meter pass.

Götze was then given the freedom of the Shakhtar area to pick his spot on 86 minutes after an unchecked run down the right from Boateng. It was the World Cup winner's fourth goal in seven competition appearances this season. 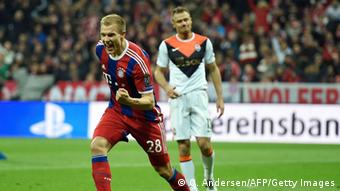 Holger Badstuber scored the fifth for a rampant Bayern

By this stage Shakhtar, which has been forced to play all its home games in Lviv due to an ongoing conflict with pro-Russian rebels in eastern Ukraine, could not leave the pitch quick enough. Its players were as relieved as Bayern's were elated by the sound of the final whistle.

Despite the easy win for Bayern, there was no space for a cameo appearance from recovering defender Philipp Lahm.

The 31-year-old club captain had been a surprise inclusion in the squad after recovering from a broken ankle sustained in training in November, but Guardiola gave pitch time instead to Sebastian Rode, Juan Bernat and Dante.

In the night's other match, the ten men of Paris St Germain beat Chelsea on away goals after extra time, after the two sides repeated the 1-1 scoreline from the first leg in normal time.

PSG had talismanic striker Zlatan Ibrahimovic sent off for a reckless lunge on Chelsea's Oscar after only half an hour, but were able to equalize through ex-Chelsea defender David Luiz (86') after Gary Cahill's opener (81').

In the extra half-hour, Chelsea retook the lead through Eden Hazard but Silva leveled for the visitors on 113 minutes and with no time for Jose Mourinho's side to find a winner, the Parisians went through on the away goals ruling.

Schalke stun Real Madrid, but miss out on quarterfinals

Roberto Di Matteo's men almost completed the impossible. It was dubbed 'Das Wunder von Bernabeu' by the German media, but it would be a step too far, despite a 4-3 triumph. (10.03.2015)