Roberto Di Matteo's men almost completed the impossible. It was dubbed 'Das Wunder von Bernabeu' by the German media, but it would be a step too far, despite a 4-3 triumph. 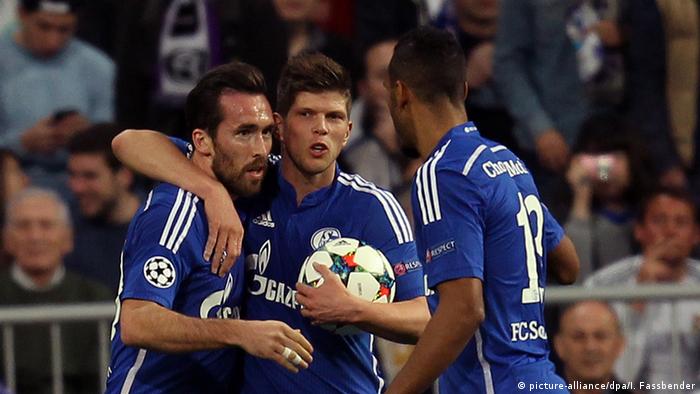 On a night when boys became men, a trident of Schalke teenagers fired the Royal Blues towards a famous victory in the Champions League. Real Madrid's 2-0 advantage from the first leg proved to be too big a gap to bridge despite the German club - who had won just two away games under Di Matteo this season - scoring four times in 90 minutes.

The diminutive double of Max Meyer and Leroy Sane - the latter scoring on his Champions League debut - turned the Real Madrid midfield inside-out, shuttling between the lines and driving at goal with every opportunity. Leon Goretzka, who ended eight months of injury problems on Saturday, made an impressive cameo appearance, while keeper Timon Wellenreuther held fort between the sticks.

The European champions were under pressure in the first 20 minutes with Eric Maxim Choupo-Moting and Meyer passing up opportunities to break the deadlock. But moments after Iker Casillas denied young Meyer from close range, Christian Fuchs sent a rasping left-foot drive past the Spanish keeper who palmed the ball into the net.

The lead lasted four minutes with Cristiano Ronaldo popping up to level the scores with a header from a corner-kick. Yet Schalke's efficiency at breaking from deep positions spiced up what had the vibe of a meaningless match in the eyes of the Spanish champions. After 30 minutes, 19-year-old Sane replaced Choupo-Moting, the Cameroonian forward leaving the field injured.

Schalke landed the second blow of the evening when Dutchman Klaas-Jan Huntelaar fired home against his former club to send the 5,000-or-so Germans wild in the top-tier of the Santiago Bernabeu stadium.

So near, yet so far

Despite the best efforts of Schalke's rookie keeper Wellenreuther, Real Madrid would land the equalizer in stoppage time of the first-half with Ronaldo taking advantage of poor positioning from the teenager to head in his second - the Portuguese forward broke the European scoring record with 78 goals in UEFA competitions. 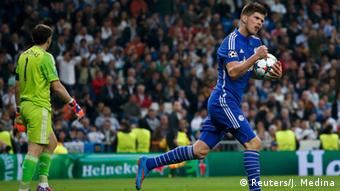 Huntelaar keeps the tie alive late in the match

While Real Madrid sneaked 3-2 ahead through Karim Benzema early in the second-half, the frustration of the home crowd was evident and there remained a sense of fragility about Carlo Ancelotti's men.

Five minutes later, Essen-born Sane swiveled superbly on the edge of the box before finding the yard space to beat Casillas with a curling left-foot shot. The Royal Blues turned another safe result for the Spaniards into a serious contest with Huntelaar powering home a splendid finish with six minutes left on the clock.

Set to a chorus of jeers from the Madrid crowd, Schalke peppered their opponent's goal for the final 10 minutes with Sane thwarted by Casillas and Benedikt Höwedes coming nail-bitingly close in stoppage time. But Real weathered the storm and - once the final whistle was blown - were quick to leave the pitch despite booking their place in the quarterfinals of the Champions League.

In the other Tuesday night European competition, FC Porto won 4-0 against Basel, meaning the Portuguese went through to the next round 5-1 on aggregate.

Bayern Munich expect to win each game they play, but against Shakhtar Donetsk on Wednesday it's an absolutely must-win game. A score-draw would send the Bundesliga champions out of the Champions League early. (10.03.2015)