Bayern Munich's Brazilian defender Breno has been arrested after a fire destroyed his luxury home. The 21-year-old player has been taken into custody on suspicion of "grave arson." No one was injured in the blaze. 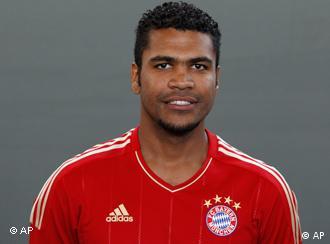 Breno had been under investigation since Friday

German Bundesliga team Bayern Munich were one player down on Saturday after Brazilian defender Breno was arrested on suspicion of burning down his own house.

The 21-year-old from Sao Paolo was taken into custody after indications that a blaze at the player's luxury home last week was not accidental. Munich prosecutors said he is now facing charges of "grave arson" and was detained for "fear of flight and danger of suppression of evidence."

Breno's villa in the exclusive Grünwald district of Munich was destroyed in the blaze last Tuesday, causing up to 1.5 million euros ($2.05 million) in damages.

The Bundesliga player fled the fire, thought to have started in a guest room in the basement, and was briefly hospitalized for smoke inhalation. His wife and the couple's three children were not home at the time of the fire and Breno was alone in the house. 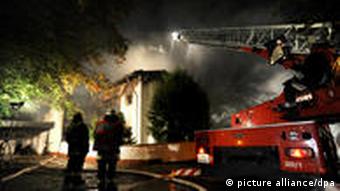 Dozens of fire fighters were called out to tackle the blaze

In a statement released to the Münchner Merkur newspaper, Bayern Munich expressed their shock at the latest developments, adding they had advised the player to seek psychological help.

"Those in charge of the club have been taking care of Breno and his family around the clock and will continue to do so," said Bayern in a statement.

"We are surprised by the new situation, but as we have no further information, we cannot comment further."

Breno, whose full name is Vinicius Rodrigues Borges, joined Germany's Bundesliga favorites in 2008 at the age of 18.

Bayern Munich are currently top of Germany's football league although Breno was yet to make an appearance this season due to a knee injury.

Dortmund lose again, Bayern move back to the top

Ruling champions Dortmund had to suffer yet another setback when Hanover snatched victory in the dying minutes. Bayern Munich beat Schalke and move back top of the table. (18.09.2011)

In the group stage of the Champions League, Bayern Munich can be happy with a 2-0 win against FC Villarreal despite several missed opportunities which could have meant a very lopsided score. (14.09.2011)

There's a lot separating Bundesliga bookends Bayern Munich and Hamburg at the moment, including 11 points in the table. But one statistic often gets overlooked: the number of homegrown players in their squads. (12.09.2011)