Bayern Munich and Arminia Bielefeld join Borussia Dortmund and Wolfsburg in the final four for the German Cup. Both teams went through a dramatic 120 minutes, plus a penalty shootout. 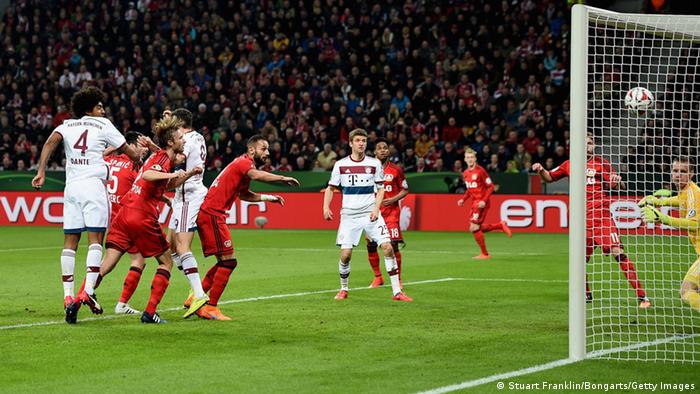 Thiago Alcantara scored the winning penalty as Bayern Munich progresses to the semifinals of the German Cup following a 5-3 shootout win over Bayer Leverkusen.

The injury-hit champions went through a battle with Germany's third-best side who hadn't conceded a goal in five successive games. Neither side found the breakthrough in 120 minutes, but Bayern held their nerve with Thiago converting the winning penalty.

The 90 minutes was characterized by some weak attacking from the visitors and excellent defending of the hosts. Roger Schmidt's men have improved in recent weeks in this area and the coach made two changes to bring in Roberto Hillbert and Emir Spahic.

Leverkusen was opting for long-range shots rather than anything clear, but Bayern had to wait until the 40th minute for their first shot on goal as Bernd Leno superbly kept out Thomas Müller towards the end of the first-half. 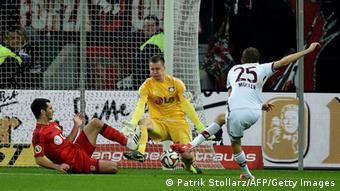 Müller came close during the game, before scoring a penalty in the shoot-out

The second 45 minutes were more combative and industrious from both sets of players. Bayern, who had introduced Sebastian Rode as a replacement for the injured Medhi Benatia, went toe-to-toe with the aggressive Leverkusen despite going through a serious injury crisis.

Both teams opened up towards the hour mark when Pep Guardiola's men were hard done by as Robert Lewandowski's header from a corner-kick was ruled out for a nudge on Omer Toprak.

On 64 minutes, Manuel Neuer pulled off a terrific block to deny Karim Bellarabi who was bearing down on the German keeper at great pace. In the resulting transition to attack at the other end, Leno threw out a leg to thwart Mario Götze who should have scored from inside the box. Twenty minutes later, Müller was again denied by Leno as the game looked headed for extra-time.

In the first minute of added time, Julian Brandt came within inches of writing his name in Leverkusen folklore. The teenager got on the end of Bellarabi's cross from the right wing, but a vital block from Rafinha changed the flight of the ball and Brandt's finish hit the side-netting.

Both Götze and Brandt passed up great chances in extra-time to send the match to a penalty shootout - Bayern has gone through four times in shootouts when the match has gone into extra-time.

Neuer set the tone for the win, saving a crucial penalty from Josip Drmic. After Lewandowski, Xabi Alonso and Götze converted, Thiago tucked home the decisive penalty to send Bayern into the semifinals as they seek to win the German Cup for an 18th time. 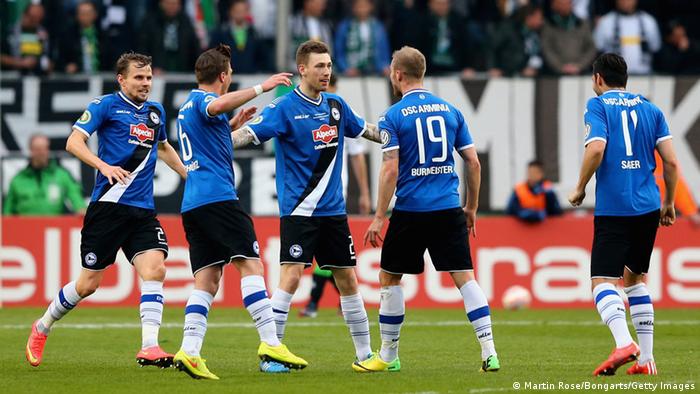 Arminia Bielefeld dispatched a third Bundesliga team on a great Cup run to set up a money-spinning semifinal with one of the Bundesliga's top-four clubs.

Following one goal apiece in 120 minutes, Bielefeld keeper Alexander Schwolow pulled off the match-winning save in penalty kicks from Borussia Mönchengladbach's Ibrahima Traore to secure a 5-4 win for the Third Division club who reached the last-four in 2005 and 2006.

Despite being the Bundesliga's in-form club with no defeat in six matches, Gladbach looked tame whilst the lower-league side looked eager to impress and pressed from the start. Yann Sommer was warned with one-or-two testing long-range efforts but the Swiss international couldn't do anything to prevent Manuel Junglas from scoring on 26 minutes.

Junglas netted two goals in the 3-1 win over Werder Bremen in the last round and beautifully converted from 25 yards with a curling, right-foot strike that landed in the inside of the net. However, Bielefeld's euphoria would be short-lived.

Max Kruse has turned into a penalty master - he netted his spot-kick in the shootout - with his last five goals coming from 12 yards. The forward was presented the chance when Christoph Hemlein threw out an unnecessary arm and was penalized. Kruse made no mistake from penalty spot on 32 minutes.

There were half-chances still to come, but both sides struggled for inspiration on a difficult surface until the 84th minute. Substitute Traore cruelly missed a great chance in normal time to win the game for the Foals, sending his shot off target from inside the box. Roel Brouwers hit the woodwork just a few minutes later with a hopeful header. 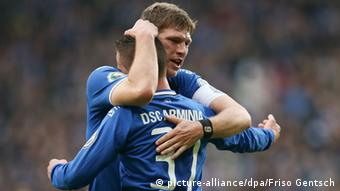 Bielefeld reach the semis for the third time in a decade

While Lucien Favre's side looked to be dominant in the first period of extra-time, Bielefeld conjured up the energy to throw the kitchen sink at Sommer's goal in the second 15 minutes. On 113 minutes, Fabian Klos, the club's topscorer with 19 league goals, headed over the crossbar after great work on the wing from strike-partner Christian Müller.

In penalties, Klos led from the front, scoring his penalty to send Bielefeld on their way. The Third Division side - the first to reach the last-four under the new DFL/DFB league structure - scored four penalties until Lorenz passed up the chance to win the tie as Sommer made a superb save.

Then in sudden death, Burmeister tucked away his spot-kick before Schwolow, once on the books of Freiburg, saved from Traore to win the match for Bielefeld who are one win away from the final in Berlin on May 30.

Borussia Dortmund are through to the semifinals of Germany's DFB Cup competition, after winning against Hoffenheim in extra time. Earlier, Wolfsburg booked their ticket to the semis after a tight win over Freiburg. (07.04.2015)