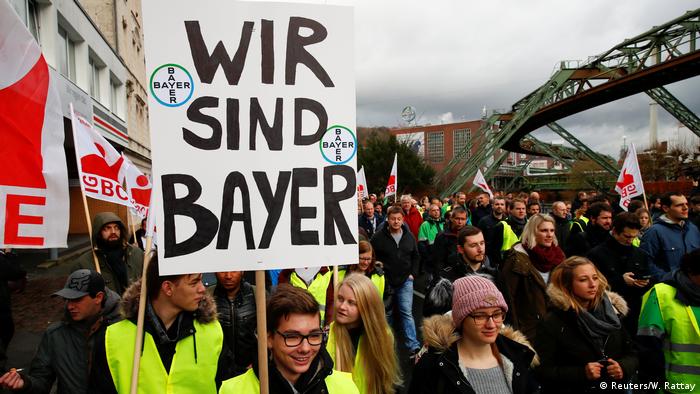 More than 1,000 employees of German pharmaceutical giant Bayer protested at the company's site in Wuppertal, in western Germany, on Monday.

The company has announced plans to cut 12,000 jobs worldwide in an attempt to placate investors after an onslaught of lawsuits that came with its $63 billion (€55 billion) takeover of agrochemical conglomerate Monsanto earlier this year.

At least 350 of the 12,000 jobs are set to be taken from Bayer's biotechnology hub in Wuppertal, where the company canceled plans for a new plant to produce Factor VIII, a blood-clotting protein, despite the fact that project was nearing completion.

Among other changes, Bayer is exiting animal health, sun-care and foot-care businesses entirely as part of its new cost-cutting measures.

According to Bloomberg news, the 12,000 lay-offs include "a significant number in Germany" despite assurances from the company that it would not cut jobs in the country until 2025.

Bayer's share price has plummeted since it bought Monsanto. Among numerous other legal problems, Monsanto was successfully sued by a consumer in California this year who said their weed killer Roundup had given him cancer.

The 12,000 jobs represent just under a tenth of Bayer's current world wide workforce. It operates in 79 countries.

Cancer drug from German pharma giant Bayer gets US approval