Bautzen, in Saxony, has seen its reputation damaged by the burning of a refugee shelter on the weekend. But, as Ben Knight reports, some locals keep trying to find practical solutions for the refugee crisis. 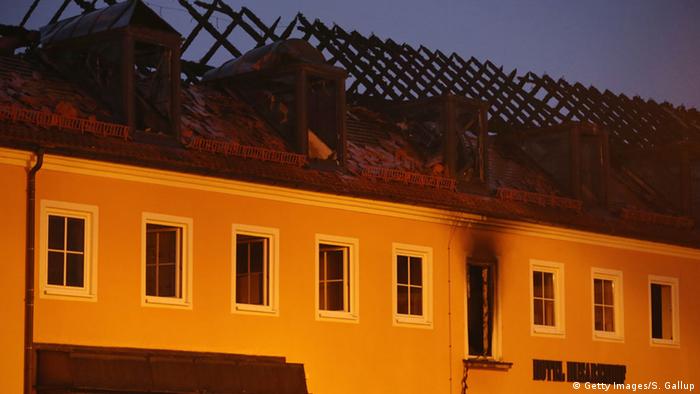 Bautzen is good at accommodating other cultures. The sign at the train station, like all the street signs in this picturesque tourist town, includes its Sorbian name, Budysin, alongside the German one in recognition of the tight-knit Catholic Slavic minority that inhabits this corner of Saxony near the border with the Czech Republic.

Not that you'd know that this week. On Saturday night, Bautzen became the scene of the latest of the hundreds of attacks on asylum homes in Germany over the past year. The roof of the former Husarenhof hotel, which was to accommodate about 300 people while they awaited approval of their asylum applications, caught fire overnight, and many say that was the result of arson. The new residents were to begin moving in during next few weeks. According to police, 20 to 30 people, some drunk, gathered at the scene to cheer the flames and chant anti-migrant slogans, and two young men were arrested for trying to hinder the work of the fire brigade.

In the grey light of Monday, there was much less excitement at the scene. A single police van was parked nearby, and the sentiments that the handful of locals nearby expressed were all shame and condemnation. Some people had hung a sign on a nearby fence that read: "Are you happy now?! Shelters destroyed - businesses destroyed - Bautzen's reputation destroyed."

The senselessness of it all weighed heavily on them, as did the awareness of world events. "This is what happens when you invade other countries," said one old man, who didn't want to be named. "Those NATO interventions in Libya and Iraq, this is what happens. And our government has supported it all."

"You have to have solidarity with the refugees," he added. But, after a few minutes of conversation, he showed his dissatisfaction with what had happened over the past year - especially when a popular resort hotel at the nearby Stausee lake was turned into a refugee home.

Christian Haase has a similar point of view. The retired engineer began a citizens' initiative last year when it was announced that the business park behind his house was to become a shelter for 300 refugees - breaking the state's own guidelines that no shelter should have more than 150 inhabitants.

Haase confounds all the current prejudices about Germany's refugee debate - he is a "Gutmensch" ("do-gooder") who has donated both his own property and his time to helping his new neighbors, but he is also critical of Angela Merkel's asylum policy. "The Syrian couple almost cried with gratitude when I gave them the camp bed," he said. "The problem is absolutely not the people coming: It's the refugee policy."

The purpose of the initiative, Haase said, is to put together a "working plan" of how to solve local conflicts. To this end, the 50 members of the initiative draw up the complaints that locals have and bring them to a monthly meeting with the local immigration authority. Then they try to come up with a solution.

Sometimes those solutions perfectly befit a retired German engineer - when Haase decided that many of the refugees with bikes were not following German traffic laws to his satisfaction, he taught classes in road rules for both children and adults (and fixed the bikes that were broken).

But Haase's skill set does not so easily solve other problems: A frequent complaint from local residents is the noise coming from the shelter, especially when the children are playing. He said the problem could easily be solved by setting up an outside playing area away from people's homes. "That's something that could be done," he said. "If you ask me, the people managing the building are determined to invest as little money as possible."

"Of course we can take people in, but not at the pace we're doing it now," he said. "We've had a million in a year, how is the integration supposed to work? This volume at this speed is just too high."

No say for locals

As with many other properties, the owner of the business park realized that at some point he could make more money from the government contracts to house refugees than by renting out the space to businesses, which meant that the tenants found out one by one that their contracts wouldn't be renewed.

Haase said all this had happened before locals could have their say. "The authorities should have done it differently," he said. "It's like an ambush: You're suddenly surprised by the notice, and all the contracts have already been signed. There's no discussion with the people. And of course that's a problem - because people feel like their opinions don't count."

As a result of the protests, the citizens' initiative group became a representative in the monthly negotiations with the local immigration authorities. At the next meeting in March, Haase is also looking to get representatives from among the refugees to join the discussion - "if they can speak English or German."

As for the burning of the Husarenhof, Haase has no truck with it, and not only because he doesn't believe in violence: "What did they achieve? Okay, they made sure there'll be no refugee shelter there for a few months, but the refugees will just have to be housed somewhere else. It's pointless."