Following World War I, artists all over the world proclaimed the "zero hour." The Bauhaus ideas centering around "a new design" were particularly influential — and they ended up spreading widely in the United States.

In his famous polemic From Bauhaus to Our House from 1981, American writer and journalist Tom Wolfe called the Bauhaus pioneers in the United States "white gods" and christened Walter Gropius, the chief ideologist, the "silver prince." Gropius emigrated from Germany to New York in 1937, after having lived in London for a while.

The Nazis had forced the closure of the Bauhaus school in Dessau in 1932 and in Berlin in 1933. In the United States, however, the red carpet was rolled out for the style pioneers from Germany. Gropius, head utopian Bauhaus designer, was immediately appointed professor at Harvard University. One year later, he took over as head of the architecture department at the Graduate School of Design. 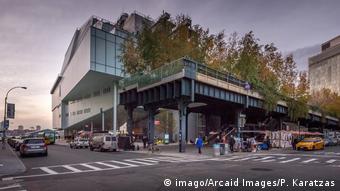 He brought his assistant with him from Germany: Marcel Breuer, who was not only able to boast the creation of his famous cantilever chairs, but also went on to design the Whitney Museum of American Art in New York, which was completed in 1966. It is also known as "The Breuer Building."

Bauhaus emigrants as international stars of the avant-garde

The emigrants from Germany were stars even before they reached the New World. Alfred Barr, one of the co-founders of the Museum of Modern Art in New York, gave a frenetic speech on the Bauhaus as early as 1929. He wanted to introduce the ideas of the Bauhaus into American culture.

Alfred Barr had already been to Europe to gain his own impressions of the new architectural style. Convinced that the new movement in architecture that gained renown in the early 1920s was something important, the director of the MoMA, together with architectural historian Henry-Russel Hitchcock and architect Philip Johnson, undertook several trips to Europe in 1930 and 1931 to investigate the phenomenon. 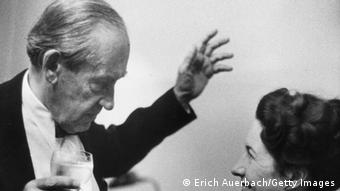 Walter Gropius fled to the US from the Nazis

They came to the conclusion that "this contemporary style, which exists all over the world, is uniform and inclusive, not fragmentary or contradictory like so much of the work of the first generation of modern architects," as it says in the catalog published to accompany the first "International Style" exhibition in New York in 1932.

In this book, Hitchcock and Johnson define the uniformity of this global form of design by way of three criteria: the emphasis on pure volume, modular regularity and the avoidance of superimposed decoration. "This is how the current style differs from the styles of the past," they wrote. Color was also frowned upon; instead, "natural facade materials and the shades of the metal profiles" were to be highlighted. 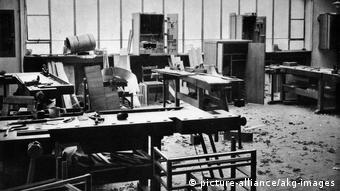 Carpentry workshop at the Bauhaus in Weimar

With works by architects from 29 countries, scale models and 1 x 2-meter photographs, the exhibition "Modern Architecture. The International Style" at New York's MoMA became a penultimate who's who of Bauhaus. Designers included Mies van der Rohe, Le Corbusier and Walter Gropius, but the exhibition also presented architects and buildings from countries such as Mexico, the Netherlands and Hungary. Without the 1932 MoMA exhibition, it would certainly not have been so easy for the Bauhaus exiles to succeed so effortlessly in the USA.

Barr, Hitchcock and Johnson were the first to so categorically identify and define this new style of building. The Bauhaus exiles quickly found a new home in the US: famous students such as Andreas Feininger, Herbert Bayer and Xanti Schawinsky were even permitted to show their work in the American pavilion at the 1939 New York World's Fair, representing the US.

Gropius and his comrades-in-arms had ensured their own fame. They rigorously promoted their own work — giving radio interviews, writing manifestos and publishing numerous texts about their visions. The first testimonials to their "New Objectivity" form of design were by Gropius and Breuer, who built small villas with flat roofs and strip windows in immediate vicinity of one another in Lincoln, Massachusetts. Both of these "masters' houses in American style" were to be prime examples for potential customers. Soon enough, in the 1950s, customers were lining up for the Bauhaus creations. Gropius was commissioned with building the Pan American World Airlines Building in New York, as well as countless other office towers.

The Bauhaus idea quickly found footing not only in New York, but also in other cities in the United States. 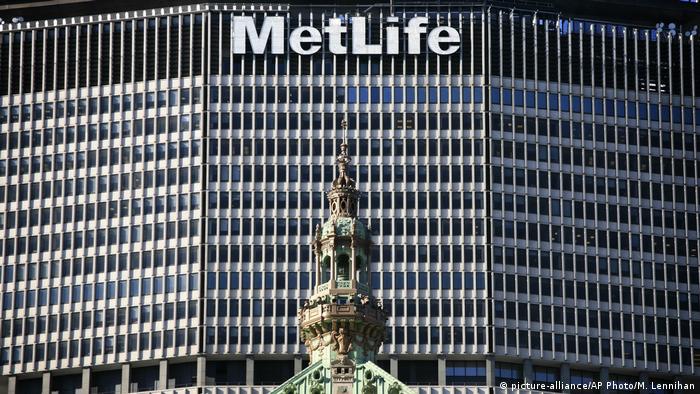 The Pan Am buiding was designed by Walter Gropius and built in the early 60s; it later became the MetLife building

In Chicago, under the direction of Laszlo Moholy-Nagy, the "New Bauhaus" was established in 1937. Referring to its model in Dessau, Germany, the Hungarian designer created a school of design that synthesized the arts. A preliminary course, based on the Bauhaus program in Dessau, was to prepare pupils for this new form of learning and teach them the basics of drawing.

In addition to a permanent staff, visiting lecturers from the University of Chicago taught the necessary fundamentals of physics, biology and philosophy. However, after just one year of teaching, the New Bauhaus had to be closed for financial reasons.

German painter Josef Albers, on the other hand, fared better. Emigrating to the USA with his wife Anni in 1933, he gained fame at the prestigious Black Mountain College in North Carolina which focused on a holistic approach to learning with the study of art as central to a liberal arts education. Among his most famous students were Pop Art artists Robert Rauschenberg, Willem de Kooning and Kenneth Noland. Other Black Mountain College notables include Robert Motherwell, Cy Twombly and Elaine de Kooning. Anni Albers, Josef's wife, was likewise a designer, creating weaving patterns for the manufacturing industry and selling her hand-woven abstract wall artworks to wealthy private customers. 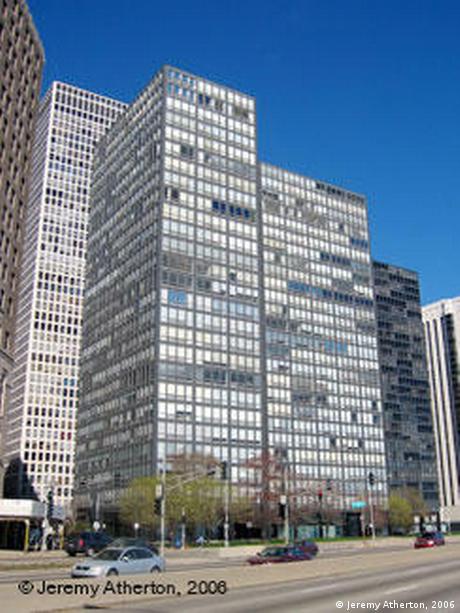 Ludwig Mies van der Rohe, one of the most important architects of the 20th century and the third Bauhaus director in Dessau, took up the post of director of the Armour Institute of Technology in Chicago in 1938. There he kept the Bauhaus ideas alive: His students learned to work with less of a focus on results. Instead, in his "Visual Training" course, they were to develop an understanding of materiality and structure.

Mies van der Rohe became interested in skyscrapers early on and took part in the first competition for designing a skyscraper in 1920/1921. One of the highlights of his career was the construction of "860-880 Lake Shore Drive" in Chicago — a pair of apartment towers with glass facades and steel-supporting structures, also dubbed the "Glass Apartments," that were completed in 1951. The towers were added to the National Register of Historic Places in 1980.

With the construction of the towers, Mies van der Rohe realized a dream that he never could have created in Germany. What's more, just a short time later, his architecture was considered the epitome of modern architecture in the United States. Tom Wolfe, however, could only make a mockery of it: He wrote that Mies van der Rohe's buildings were nothing more than "boxes of glass and steel."