Michael Ballack is enjoying an Indian summer in the fall, some would say winter, of his career. But it appears he won't bow out at Leverkusen, who look likely to let him go elsewhere for one last fat contract. 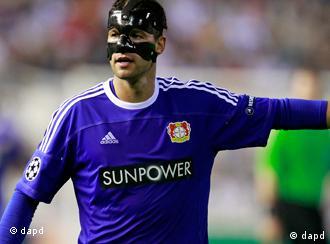 Ballack has been in the wars, but he loves it there

Michael Ballack is now 35, just a year younger than a certain other deathless superstar midfielder. In any rational universe, he and David Beckham should be preparing to rest their weary bones on a sofa for TV pundits. Instead, if transfer rumors are anything to go by, they could soon meet on an old battlefield - a clash of the pensioner titans in the English Premiership.

Of course, transfer rumors are nothing to go by. Most sober pundits expect Beckham to ease himself into retirement in Ligue 1 in France. But as for battle-hardened Ballack, who knows?

The Bild newspaper reported last week that no fewer than three Premiership sides (Tottenham, Fulham and Blackburn) had made offers for the Leverkusen player over the summer. The revelation was delivered in the wake of his team's 2-1 triumph over Ballack's old club Chelsea in the Champions League, leaving Bayer top of their group.

Ballack's contract with Leverkusen only runs until the end of the season, and there has been a deafening silence from the club on the subject. When asked on German TV to comment on Ballack's impending contract negotiations, Leverkusen's sporting director Rudi Völler offered only, "Let's just be happy that Michael is playing well again."

And he certainly is. The former Germany captain has hit a purple patch in the last few weeks, performing his creative linchpin role in midfield with old aplomb and even contributing goals as well. He has scored three this season so far (two Bundesliga, one Champions League) and his last contributed to the win over Kaiserslautern on November 18. 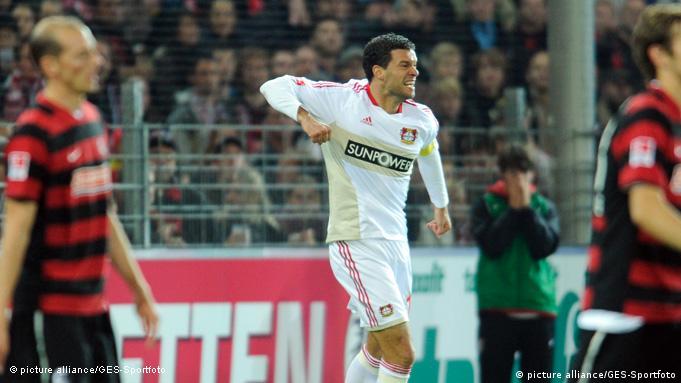 But it's his sheer will that seems to impress the team him most. "Michael has been driving us forward with his performances for months," his coach Robin Dutt opined recently to news agency dpa. "He shows us the will to succeed by living it. He is in very good form, imposes himself and is part of a lot of goal chances."

Putting noses out of joint

It was a little over an hour after scoring his second goal of the season - the one that settled an untidy match against Freiburg on October 28 - that Ballack broke his nose in a collision with Freiburg's Jan Rosenthal. But that couldn't slow down an old battler like Ballack. After a brief trip to the hospital, he was back in Leverkusen's starting line-up - with a menacing carbon black mask - for the Champions League tie against Valencia four days later.

Ballack seemed to draw strength from the injury - as if playing through the pain has boosted his adrenaline.

This is shouldn't be surprising, since conflict and adversity are Ballack's meat and drink, as his German national team-mates know. Now his fury has been turned on his club. "At Bayer it's sometimes like some kind of sleepy-land," he told broadcaster Sky ahead of the Kaiserslautern game. "Everyone is so happy just to play here." Völler is keeping his cards close to his chest, but then so is Ballack

Ninety minutes and one more display of midfield bullying later, he explained his motives for the pre-match rocket. "I hope that didn't go down well," he said. "Because that's exactly what we need: discussions, different opinions and perspectives. It's only then that you can improve. If everyone agrees, we won't get anywhere."

Dutt covered the midfielder's back for this belligerent outburst. "He's such an experienced player, he's allowed to express his point of view," the coach said. "I don't see any problem in that."

But while Dutt gushes, Leverkusen are still being cagey. "If Rudi Völler comes tomorrow and says he'll give me a five-year contract, then I'll probably think about it," Ballack joked recently.

But maybe it's not just the club that's stalling. Ballack is possibly also keeping his options open, not least because the press in his home country has not been particularly kind to him over the past couple of years. "I still feel good, but I don't know what I'm going to do," he said. "If I stay healthy, I'd like to play another one or two years at a good level."

And if he does have one more professional contract in him, he might as well make it a lucrative one. According to Bild, clubs in China, Russia, Qatar, and the US have already waved substantial wads of cash at him. But he appears unimpressed by the prospect of moving to one of those countries. Perhaps the clash with Chelsea gave him the taste for one last hurrah in England?

Bayern Munich won't be the only German side to play in the knockout round of Europe's premier soccer league. They'll be joined by Bayer Leverkusen, while Dortmund are all but out thanks to a defeat by Arsenal. (23.11.2011)

After Dortmund won the league last season with the youngest-ever squad, youth was all anyone talked about in the Bundesliga. But this year old-timers are posting numbers that show there's more to the game than just age. (31.10.2011)

It would be an understatement to say that Michael Ballack did not take kindly to Germany coach Joachim Löw's calling time on his national team career. But Ballack may regret kicking up a fuss. (19.06.2011)