Bayern Munich won't be the only German side to play in the knockout round of Europe's premier soccer league. They'll be joined by Bayer Leverkusen, while Dortmund are all but out thanks to a defeat by Arsenal. 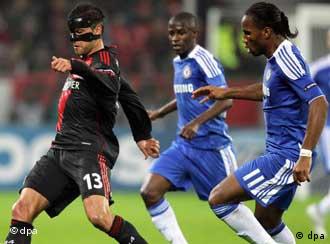 Chelsea recognize the man behind the mask - an ex-teammate

Bayer Leverkusen stunned Chelsea with a last-gasp headed goal on Wednesday to go top of Champions League Group E. However, they are unlikely to be joined in the knockout stage by fellow German side Borussia Dortmund, who lost their match at Arsenal 2-1.

Leverkusen, who face Genk in their last group match in December, top the group on nine points, one ahead of Chelsea and Valencia.

At Leverkusen, after a first 20 minutes spent in a midfield tug-of-war, the game gradually opened up with the hosts' Michael Ballack, in his 100th European appearance, heading a corner onto the crossbar in the 32nd minute.

Chelsea's Didier Drogba fired a goal three minutes into the second half, but substitute Eren Derdiyok leveled with a far-post header in the 73rd minute.

Leverkusen came in from behind in stoppage time, with a goal from Manuel Friedrich to secure the team's 2-1 victory.

Arsenal ahead, as usual 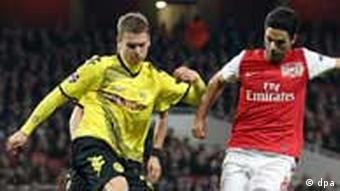 Arsenal reached the knockout round of the Champions League for the 12th successive season when a Robin van Persie double gave them a 2-1 win over Borussia Dortmund in a tense Group F match at the Emirates Stadium.

Van Persie scored for the 16th and 17th time in 18 appearances for Arsenal this season when he headed home after a superb run and cross from Alex Song after 49 minutes.

He made it 2-0 when he swept in from close range in the closing stages. Shinji Kagawa got a consolation for Dortmund with the last kick of the game.

Dortmund had to win to stand any chance of advancing themselves, but apart from a couple of early attempts and one half-chance in the second half, they never looked capable of ending Arsenal's long unbeaten home run in the group stage of the competition.

Dortmund's game plan was disrupted midway through the first half when they lost midfielders Sven Bender and Mario Götze within minutes of each other, and Arsenal gradually took control of the match and rarely looked in danger.

In Wednesday's other soccer action, APOEL Nicosia became the first Cypriot side to reach the knockout stage in Europe's top league, thanks to a goalless draw at Zenit St. Petersburg.

Champions Barcelona were 3-2 winners at AC Milan to make sure of top spot in group H.

Spurred on by a loss against German champions Borussia Dortmund on the weekend, Bayern Munich has advanced to the knockout stage of the Champions League with a decisive win over Villarreal. (23.11.2011)

If they're serious about titles, Bayern could learn a lot from Dortmund

Those only interested in goals may have been disappointed by Saturday's clash of the titans. But otherwise, Bayern versus Dortmund had all a fan could want. DW analyzes the lessons learned. (20.11.2011)

After making a slow start to the season, German champions Borussia Dortmund are hitting top form. It's well timed as they face a crucial week with games against Bayern, Arsenal and Schalke over the next seven days. (18.11.2011)