Bassem Youssef: Fear has no future

Speaking in Bonn, Germany, Egyptian political satirist Bassem Youssef discusses the unsustainability of fear, saying "Satire was our weapon to dissect through the lies and rhetoric that were used to control the people." 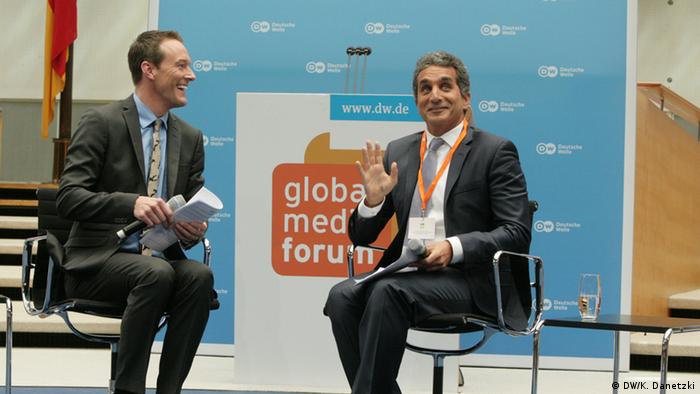 Fearing for his own safety, political satirist Bassem Youssef chose to cancel his hugely popular weekly talk show, "Al Bernameg." Speaking to a full house at the World Conference Center in Bonn on the occasion of the 2014 Deutsche Welle Global Media Forum, he named fear to be the key reason behind his decision. "Fear sells, fear intimidates, fear makes humans go against their best judgment," commented Youssef, whose program had also been broadcast on Deutsche Welle's Arabic television channel.

Youssef criticized those who hide behind religion, using fear to manipulate the masses. He said that fear also paved the way toward fascism, and 60 years later, these techniques are still valid. "Fear sells, fear works, fear is a winner. Satire and comedy might be one of the very few antidotes against fear," said Youssef during his speech at the media congress. For three days, experts and guests from approximately 100 countries are meeting to discuss and analyze topics related to the conference theme, "From Information to Participation - Challenges for the Media." 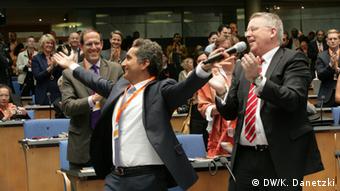 A warm welcome for Bassem Youssef at the Global Media Forum

Looking optimistically to the future, Youssef says that today's world is full of young people who will not accept outdated mechanisms of power. "The propaganda that worked for their parents' generation won’t be able to control them anymore … Fear is unsustainable, it cannot build nations, it only destroys." Directly addressing his adversaries, Youssef concluded by saying, "in the books of history you will lose and in the hearts of the young, you have already lost."

DW's national and international partners for the 2014 Global Media Forum include, among others, Amnesty International, Deutsche Telekom, the Grimme-Institut, NATO, the United Nations, the Vodafone Institute for Society and Communications and Voices of Africa.

The conference is co-hosted by the Foundation for International Dialogue of the Sparkasse Savings Bank in Bonn. Support is also kindly provided by Germany's Federal Foreign Office, the Federal Ministry for Economic Cooperation and Development and the City of Bonn.