Basque separatist group ETA has said it will not "carry out armed actions" in its campaign for independence, according to a video obtained by the BBC. The Spanish government, meanwhile, has rejected the announcement. 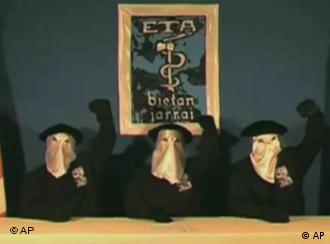 This isn't ETA's first ceasefire - it's declared 11 in past years

Basque separatist group ETA has declared a ceasefire, the BBC reported Sunday, citing a video statement it had earlier obtained from a Basque newspaper.

The video said the group would no longer "carry out armed actions" in its campaign for independence in a decision it came to several months ago "to put in motion a democratic process if the Spanish government is willing." 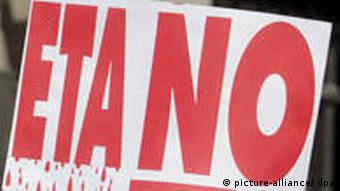 The Spanish government says it will only accept a definitive ceasefire

The party's organizational secretary, Leire Pajin, said Spaniards would only accept one announcement from ETA: "That it will definitively lay down arms, dissolve itself and abandon violence once and for all."

For Prime Minister Jose Luis Rodriguez Zapatero, ETA's announcement - which failed to indicate whether it was permanent or temporary - was "very little," according to government sources.

Spanish governments have made several failed attempts over the past four decades to negotiate with ETA, which has declared 11 ceasefires since 1981.

The truce announced Sunday was preceded by a "permanent" ceasefire declaration in 2006. It lasted about nine months before being broken by a car bombing that killed two Ecuadorian immigrants at Madrid's airport in December 2006.

More than 820 people have been killed since 1968 in ETA's campaign for a sovereign Basque state carved out of northern Spain and southern France.

The Spanish government, however, refuses to enter dialogue with the separatist group on the topic of its independence.

A court in Spain has sentenced three members of Basque militant group ETA to 1,040 years in prison for their role in a Madrid bomb attack. (21.05.2010)