German basketball player Joshiko Saibou appeared maskless at a protest against Germany's coronavirus restrictions, leading his team to terminate his contract. Now, Saibou is being advised to take legal action. 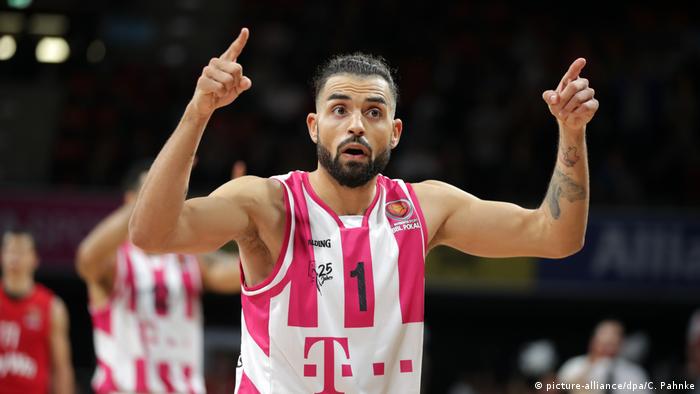 German basketball player Joshiko Saibou has been advised to take legal action against the termination of his contract by his team, the Telekom Baskets Bonn, after he and his girlfriend took part in a demonstration against coronavirus restrictions.

The pair were pictured at the demonstration in Berlin on August 2, which attracted around 20,000 participants according to the authorities, not wearing masks and not adhering to social distancing requirements.

Consequently, the Telekom Baskets, who play in Germany's Basketball Bundesliga (BBL), terminated Saibou's contract without notice on the grounds of "violations of the provisions of his current employment contract as a professional athlete."

Now, Athleten Deutschland (Athletes Germany), a body which represents the interests of German sportsmen and women, has confirmed that they are in contact with Saibou and his lawyer.

"Given what we currently know, it is doubtful whether the reasoning given by the Telekom Baskets fulfills the requirements for dismissal without notice," the body said in a statement. "It would be logical were Joshiko to make use of his rights and take legal action."

Athleten Deutschland distanced themselves explicitly from Saibou's general views on the coronavirus pandemic, but insisted that athletes' rights to freedom of expression must be protected as long as they fall within constitutional boundaries.

Justifying the decision to terminate Saibou's contract, Telekom Baskets team president Wolfgang Wiedlich pointed out that basketball teams in the BBL were currently working "meticulously" on hygiene concepts for spectators and occupational safety guidelines for players in the coming season.

"Therefore, we cannot be held responsible for a permanent risk of infection, such as that posed by Saibou, either to his colleagues in our team or to other BBL teams in competition," he said.

Saibou rejected the accusations in a video posted on his Instagram account, saying that calling him a danger to the team was "unfounded." For months, Bonn, which didn't qualify for the BBL's final tournament in Munich in June, has not held any team practices. And that won't change in the foreseeable future.

"At the demonstration, I made sure that I didn't endanger anyone," the point guard said, calling his dismissal was a "slap in the face for freedom of speech."

His girlfriend, long jumper Alexandra Wester, said in an Instagram video of her own that "clubs still treat their athletes like dolls."

"You should understand that we athletes are not the slaves of modern times. but you are making us into them," she said.

As Wiedlich has pointed out though, Saibou isn't just an "occasional denier" of the coronavirus pandemic.

Saibou and Wester had voiced some crude theories on social media in recent months. In April, Wester posted an Instagram video in which she criticized the German government's actions during the coronavirus crisis. In it, she claimed that lawyers and doctors who stood up for human rights should be locked up in insane asylums.

In May, Saibou published an "Appeal to the Mind," also on Instagram, in which he accused the public of blindly following the media and politics. 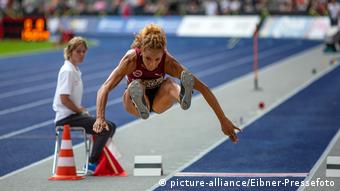 "Don't question anything! Even when people are beaten down and arrested. That's good for all. So, cover your mouth," Saibou said before putting on a mask.

Even then, Weidlich distanced himself from Saibou's statements, but respected the freedom of opinion. So far, the German Basketball Federation (DBB) and, in Wester's case, the German Athletics Association (DLV), have acted similarly.

Saibou played 10 international games for Germany. He moved to Bonn from Alba Berlin before the 2019-20 season.

Wester is hoping to represent Germany at the 2021 Olympic Games in Tokyo. DLV head coach Annett Stein, however, has made it clear to Wester, in her own words, "that every DLV athlete has to be a role model when it comes to politically motivated statements on controversial issues."