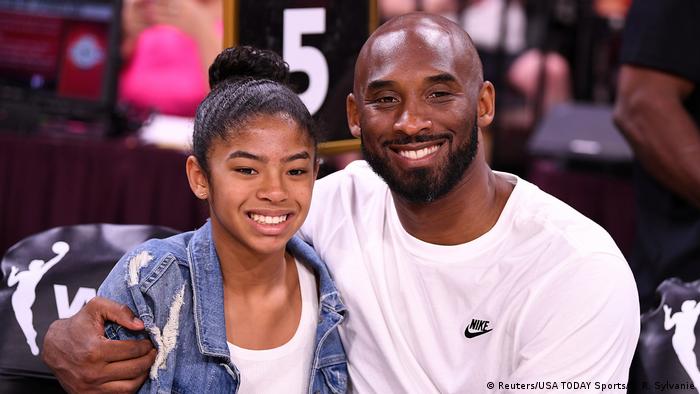 Bryant's 13-year-old daughter Gianna was among those killed in the crash.

Seven others, including the pilot, were killed in the crash in Calabasas, though their identities were not immediately released.

The LA County Sheriff's department refused to confirm the identities of the victims, with one of their representatives saying it would be "entirely inappropriate" to name them before they were officially identified by a coroner and before their next of kin was notified.

"We will be waiting until the coroner finishes her job," Sheriff Alex Villanueva said at a press conference.

The City of Calabasas had initially said five people were killed in the crash. "It is with great sadness that we learn of the death of Kobe Bryant and four others in a helicopter crash in Calabasas," the city tweeted before the LA County Sheriff press conference. "The aircraft went down in a remote field off Las Virgenes around 10:00 this morning. Nobody on the ground was hurt. The FAA and NTSB are investigating."

Bryant is considered one of the best players in NBA history and a global sports celebrity.

When he retired in 2016, he was the third-leading scorer in the league's history. That record was broken last week by Lebron James, who now plays for the Lakers.

"Continuing to move the game forward (Lebron James)," Bryant said in his final tweet. "Much respect my brother."

Commenting on his passing, Los Angeles Mayor Eric Garcetti said the famous athlete "will live forever in the heart" of the city.

Garcetti described him as "a giant who inspired, amazed, and thrilled people everywhere with his incomparable skill on the court — and awed us with his intellect and humility," according to an official statement.

Kobe Bryant was born in Philadelphia to NBA veteran Joe "Jelly Bean" Bryant, who later retired from NBA to play in Italy. The future LA Lakers star spent eight years of his childhood in Europe and became fluent in Italian before coming back to the US as a teenager. Bryant was drafted into NBA by the Charlotte Hornets at the age of 17. He made his official debut with the Lakers, however, having been acquired by the LA team shortly after the 1996 draft.

He went on to win five championships throughout his 20-year career with the Lakers. He also earned Olympic gold medals with the US basketball team in 2008 and 2012.

Bryant also wrote and narrated a short animated film in 2017, titled "Dear Basketball" and based on Bryant's 2015 letter which announced his retirement. Bryant's film won the Oscar for the Best Animated Short Film at the 2018 Academy Awards.

Following reports of his death on Sunday, San Antonio Spurs and Toronto Raptors both took 24-second shot clock violation in honor of Bryant, who wore number 24 while with the Lakers.

Brazilian football star Neymar dedicated the goal he scored for Paris Saint-Germain (PSG) against Lille to the late NBA star.

It has been two months since Dirk Nowitzki walked away from the basketball court after a glittering 21-year NBA career. The 41-year-old is now spending time with his family and doing things he could never do before. (03.07.2019)