"Show Me The Monet" is Banksy's second-most lucrative painting to have sold at auction. The artwork is the reclusive artist's take on a famous piece by French impressionist Claude Monet. 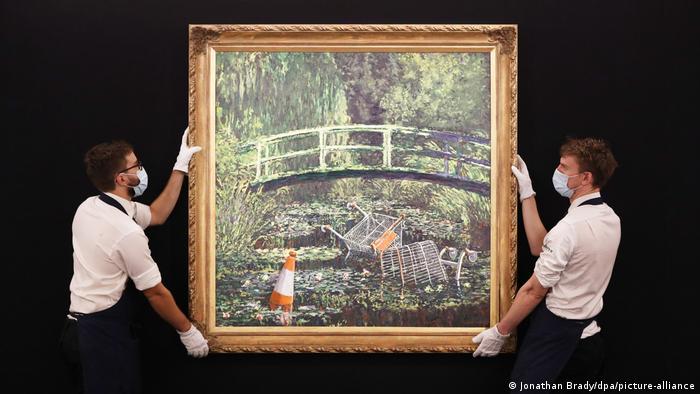 "Show Me The Monet" is Banksy's take on a famous painting by French impressionist Claude Monet and its sale price far exceeded expectations, with Sotheby's auctioneers predicting the work would fetch half its eventual sale price.

It was bought by an anonymous private collector from Asia.

Additions to the original

Banksy's oil painting is based on Monet's "The Japanese Bridge" — but has a couple of additions compared with its esteemed original.

The reclusive artist's version includes two shopping carts and a traffic cone floating in the pond of the idyllic scene.

Banksy created the artwork in 2005 for an exhibition called "Crude Oils" which reinterprets the works of famous artists. At the time, he said with regard to his piece: "The real damage to our environment is not done by graffiti writers and drunken teenagers, but by big business and lazy architects."

The sale price was the second-highest ever paid for a Banksy painting, the auctioneers said. In 2019, the anonymous artist's "Devolved Parliament" showed the House of Commons attended by chimpanzees and fetched just under £10 million.

In 2018, Banksy's "Girl with the Balloon" partially shredded itself just moments after it was sold at auction and now bears the title: "Love is in the Bin."

Banksy, whose real name has never been officially revealed, began his career spray-painting buildings in Bristol, and has since become one of the world's best-known artists.