Banks in Cyprus have closed after their first day open under tight transactions controls. A run on deposits that had been feared after the government was forced to accept a stringent EU rescue package never materialized. 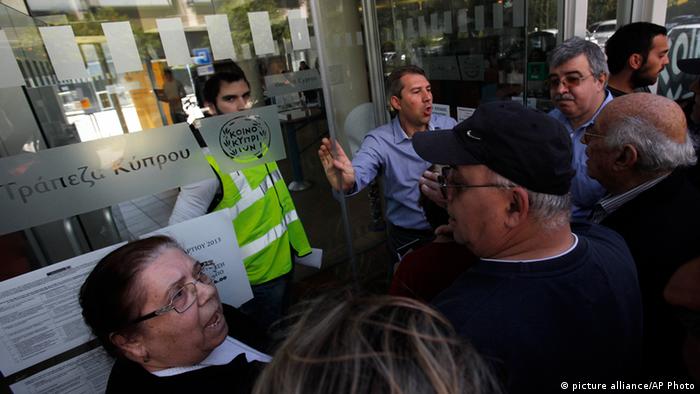 Financial institutions opened for the first time Thursday after being shut for almost two weeks as the government negotiated a bailout of 10 billion euros ($13 billion) to avert a national bankruptcy. Cyprus became the first eurozone country to impose losses on depositors.

Cash was delivered by armored trucks and lines formed well ahead of the noon (1000 GMT) opening time.

Cypriots were reported to have waited calmly to withdraw money after the country's banks opened for business for the first time in almost a fortnight. The government has imposed restrictions on how much can be withdrawn. Security personnel were limiting the number of people being allowed into any one bank at one time, but the lines didn't appear to be as long as some had feared.

Overnight, container trucks transported billions of euros in cash that had arrived at the airport at Larnaca and rolled up to the central bank in Nicosia. Security was tight for the operation, with a helicopter hovering above the convoy and police armed with rifles stationed around the central bank's compound.

A lot of money had left Cyprus electronically during the two weeks that banks were closed. Figures published by the central bank on Thursday showed that account holders from other eurozone countries withdrew 18 percent of their deposits from the stricken island in February, ahead of the tax on bank accounts that eventually passed. Private sector bank deposits in Cyprus fell by 2.2 percent to 46.4 billion euros last month, after a similar drop in January.

The government also announced that it had appointed a panel to investigate the banking meltdown and look into claims of junior bondholders.

Cypriots wonder what comes next

Cypriots face hard choices. On Thursday the banks finally open again, but economists predict a long-lasting recession that will destroy many jobs. (28.03.2013)

President Nicos Anastasiades praised the "maturity and responsibility" shown by Cypriots in the face of the crisis. "We have shown that not only do we want to drag our country out of this difficult position, but that we will do it," a statement from the presidency said.

The Finance Ministry limited cash withdrawals to no more than 300 euros per day and banned the cashing of checks. The central bank will review all commercial transactions over 5,000 euros and scrutinize transactions over 200,000 euros on an individual basis.

People leaving Cyprus may take only 1,000 euros with them in cash. Officers at Larnaka airport searched some travelers for cash and had orders to confiscate anything above 1,000 euros.