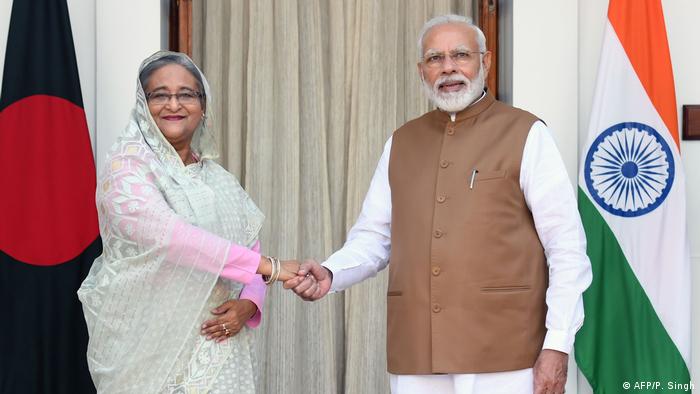 The spokesperson for India's Foreign Ministry, Raveesh Kumar, wrote on Twitter that the two leaders "reaffirmed the mutual commitment to strengthening India-Bangladesh relations for the benefit of not just the two countries but the entire region."

A joint statement said India and Bangladesh had agreed on the need for greater effort to facilitate the safe return of hundreds of thousands of Rohingya refugees who fled a violent crackdown in Myanmar.

The statement, issued by Hasina, said she and Modi agreed that the measures for the Rohingya refugees should include improving security and socio-economic conditions in Myanmar's Rakhine state.

India will provide additional humanitarian aid to help refugees living in camps in Bangladesh, according to the statement.

Hasina recently presented a four-point plan at the UN General Assembly to end the crisis, of which her country has borne the main burden despite not causing it.

Bangladesh has taken the vast majority of Rohingya refugees — more than 700,000 — while an estimated 40,000 Rohingya also have taken refuge in parts of India.

It had been expected that the two nations would also likely discuss their own migrant issues. India has recently sought to identify thousands of what it says are "illegal migrants" from Bangladesh who have entered India across their porous border over the years. India plans to seek their repatriation to Bangladesh.

Hasina also highlighted that the people of Bangladesh are awaiting implementation of a 2011 agreement for sharing water from the Teesta river, which flows from India into Bangladesh.

Modi told her that his government is working with all stakeholders in India for the implementation of the agreement.

Bangladesh has said it is a lower riparian state and needs Teesta river water during the lean summer season.

The agreement has been pending since it was nearly signed in 2011 as it has been blocked by India's West Bengal state Chief Minister Mamata Banerjee. Banerjee has said the state can't spare water for Bangladesh because of its summer needs.

Despite the disagreements, Bangladesh and India currently share friendly ties and both sides appear determined to increase bilateral cooperation in a number of areas.

Furthermore, both New Delhi and Dhaka want to transform the Bay of Bengal region into a hub for connectivity and wealth between South and Southeast Asia, by integrating the region's markets and removing obstacles to cross-border flows of goods, services and people.

Observers say India is focused on making Bangladesh a central element of its Act East policy, to counter China's growing influence in South Asia, a region viewed by New Delhi as its backyard.

Experts point out that, whether land-based or maritime, New Delhi's connectivity plans for Myanmar and Southeast Asia rely crucially on transit rights and infrastructure development in Bangladesh.

No onions, even for Hasina

The visit also comes against the backdrop of India's decision to ban onion exports, which has caused shortages, soaring prices and widespread anger in Bangladesh, where the vegetable is used in most dishes.

The price of onions is a sensitive subject in South Asia, where shortages can trigger widespread discontent with political ramifications.

Speaking at the India-Bangladesh Business Forum on Friday, Hasina referred to the hardships being faced by Bangladeshis following the Indian government's decision.

In a lighter vein, Hasina said that after the export ban, she had asked her cook not to use onions. "I have asked my cook not to prepare meals with onions since you have stopped sending us onions. In the future, do alert us if you plan to take such steps so that we can prepare ourselves better," said Hasina.

One kilogram of the staple vegetable usually costs 30 taka (36 US cents, 32.8 euro cents), but has soared to up to 130 taka after India imposed the export ban over the weekend.

Amid a public outcry, Dhaka quickly took steps to import the vegetable from Myanmar, Turkey, China and Egypt.