Bangladesh: Islamists emboldened by Taliban win in Afghanistan | Asia | An in-depth look at news from across the continent | DW | 25.08.2021 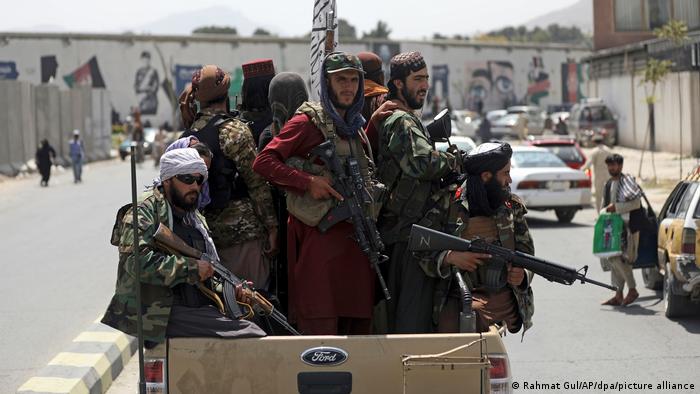 The Taliban's takeover of Afghanistan seems to have boosted the morale of Islamist groups, including those in Bangaldesh

"Go ahead (Taliban), the future world is waiting for you to lead it," S. Islam, a user from the northeastern Bangladeshi city of Sylhet, wrote on the DW Bengali service's Facebook page.

A. Shek, another Facebook user from the district of Sirajganj, considers the Taliban's takeover of Kabul "a victory of Islam." "I'm so happy to see the victory of Islam before my death. I was never that happy before in my entire life," he wrote.

Thousands of users have been incessantly posting comments on social media to praise the Islamic fundamentalist group's victory and denounce Western media outlets "for propagating" against it.

Earlier this year, police in the capital, Dhaka, arrested at least four suspected Islamists who wanted to travel to Afghanistan via India and Pakistan to join the Taliban.

They were part of a group of 10 people who were searching for ways to become members of the fundamentalist group. Two of them have reportedly already been able to join the Taliban.

"We have got a lot of information from the arrested persons. But it's not yet clear how many Islamists have moved from Bangladesh to Afghanistan to join the Taliban fighters," Asaduzzaman Khan, the chief of the counterterrorism unit of Dhaka police, told DW.

Meanwhile, Indian newspapers have reported that the country's border security force is on alert along the India-Bangladesh border after the police chief of Dhaka claimed that several radical Bangladeshi youths were attempting to sneak into India to make their way to join the Taliban in Afghanistan.

How worried should Bangladesh be?

Islamic fundamentalists who had traveled from Bangladesh to Afghanistan in the 1970s and 80s to fight alongside the Afghans against the then Soviet Union later returned home and formed militant groups including Harkat-ul Jihad al-Islami (HuJIB) and Jama'atul Mujahideen Bangladesh (JMB).

For years, such groups have actively tried to destabilize the country by carrying out terror attacks.

Still, experts say that Bangladesh need not worry any more than other South Asian countries following the new developments in Afghanistan.

"The regional impact of the Taliban rule will depend on how they behave and whether they backtrack from their promise not to let any terrorist organization use Afghanistan as its base," Ali Riaz, a political science professor at Illinois State University, told DW.

"Whether conflict ensues will also be a determining factor," he said, adding: "Bangladesh should be cautious, but neither should it be overly concerned nor use this as a pretext to clamp down on legitimate detractors of the government, falsely accusing them as Taliban sympathizers."

Afghan refugees in Pakistan: No hope to return home

"Bangladesh's problems with Islamist militancy aren't as serious as they are in Pakistan, but given the presence of some groups, local and foreign, in the country, there should be some reason for concern," he told DW.

"The good news is that the Taliban themselves have no interest in stoking regional terrorism. Their concerns and interests are Afghanistan-focused," he said, adding: "So, it's not like the Taliban will encourage militants to carry out attacks outside Afghanistan. The problem is that militants will be inspired themselves to do so."

Bangladeshi police haven't disclosed any information on how many fundamentalists they have kept under surveillance, but they have acknowledged identifying networks that have in the past lured youths into joining the Taliban.

"We monitor the cyber world regularly and take action when we find someone who has been trying to become a militant," Dhaka police chief Shafiqul Islam told DW.

"We initially try to stop the person by informing their family about their intention to become a militant. If nothing works, we arrest the person to stop them from being radicalized," he added.

Experts argue that while Bangladeshi police's "iron fist" approach to curbing militancy had gained some initial success, it could backfire in the long run.

"Bangladesh's government has taken an iron fist approach to militancy. It's cracked down on everyone, including innocents who had nothing to do with militancy," Kugelman said.

"So Dhaka's counterterrorism achievements may be Pyrrhic victories: They killed terrorists and degraded their capacities, but they also may have laid the groundwork for future radicalizations of non-militant Islamists that resent how they've been treated by the state," he said.

Professor Riaz also says Dhaka's actions against militants have paid off only in the short run, by weakening terror groups like al-Qaeda and the "Islamic State" in the country.

"But militancy does not grow in a vacuum; there are factors which allow it to thrive," he said, adding: "On that count, the situation has not improved in Bangladesh. I am afraid that violent extremism has gained more support and sympathy within society than ever before."

Both the ruling and opposition parties in Bangladesh are courting Islamist groups to garner votes ahead of the upcoming general elections. But why has religion become so important for mainstream parties in the country?