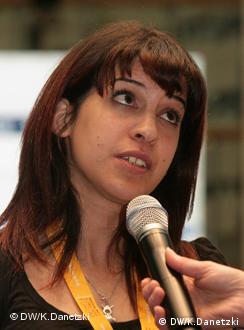 Lina Ben Mhenni during the BOBs award ceremony in Bonn

In a ceremony at the Deutsche Welle Global Media Forum, Tunisian blogger Lina Ben Mhenni was presented with The BOBs international blog award, hosted by Deutsche Welle, on Monday evening, 20 June 2011 in Bonn, Germany. The 28-year-old professor at the University of Tunis has been writing about social and political events in her country in a blog called “A Tunisian Girl” (http://atunisiangirl.blogspot.com) for several years. She writes in French, English and Arabic.

“When I saw how people were being killed it became clear there was no going back,” said Ben Mhenni. “I had to ensure that the voices of these people and their families be heard so that they hadn’t died in vain.” For her, the brutality of the regime in Tunisia was the main reason to provide online support to the revolution. But she says the revolution was created by the people “who took to the streets and risked their lives”.

Since the political upheaval she has been blogging about her homeland’s difficult path towards democracy. She says the struggle for a democratic Tunisia by no means ended with Ben Ali’s downfall. Ben Mhenni says she’ll continue her work and “try to protect the fruits of the revolution”.

Other winners at The BOBs awards ceremony in Bonn were:

* Best Social Activism Campaign: Wael Ghonim (represented by Mohamed Ibrahim) for the Facebook page “We are all Khaled Said” (www.facebook.com/ElShaheeed)

* Best Use of Technology for Social Good: Pavel Senko for “Rospil” (http://rospil.info). The “Rospil” online community is also a project by Russian blogger Alexey Nawalny.

Internet users from around the world submitted around 2,100 recommendations for The BOBs blog awards which are given in 11 languages and six categories.