India culls thousands of birds over avian flu concern | Asia | An in-depth look at news from across the continent | DW | 14.01.2021

An outbreak of avian influenza or bird flu is rapidly spreading across India, causing concern among officials and forcing them to come up with a plan to tackle the emergency. 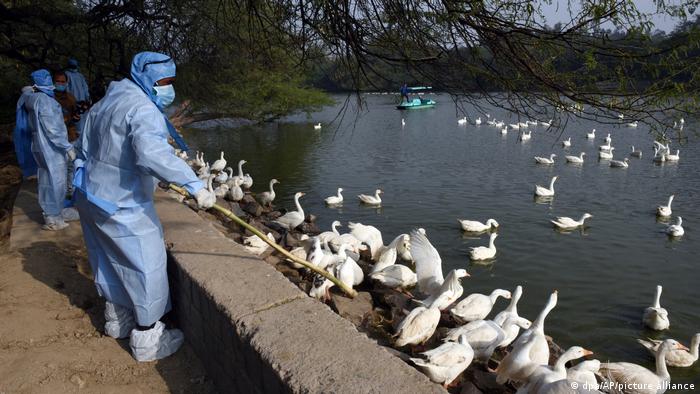 Even as India prepares to roll out its massive vaccination program as part of the efforts to end the COVID pandemic, the country is facing a new health crisis. Over the past few weeks, cases of bird flu have been reported from various states across the South Asian nation, posing a new challenge to authorities.

Officials in several states have stepped up efforts to contain two strains of bird flu — H5N1 and H5N8 — in recent days after the deaths of thousands of migratory birds, ducks, crows and chickens.

Addressing the issue at a virtual meeting held with state governments, Prime Minister Narendra Modi said, "Poultry farms, zoos, water bodies have to be constantly monitored to control the spread of bird flu." He stressed that authorities have put together a plan to tackle the emergency.

The spread of avian influenza has been confirmed in more than ten states so far, including Uttar Pradesh, Kerala, Rajasthan, Delhi and Maharashtra. States that haven't reported cases have also been asked to exercise caution.

Samples from dead birds are being studied at the National Institute of High Security Animal Diseases (NIHSAD), in the central city of Bhopal.

"People who come in direct contact with poultry are most at risk of being infected by the flu. However, human-to-human transmission can also occur," Aravind M, a Bengaluru-based doctor, told DW. 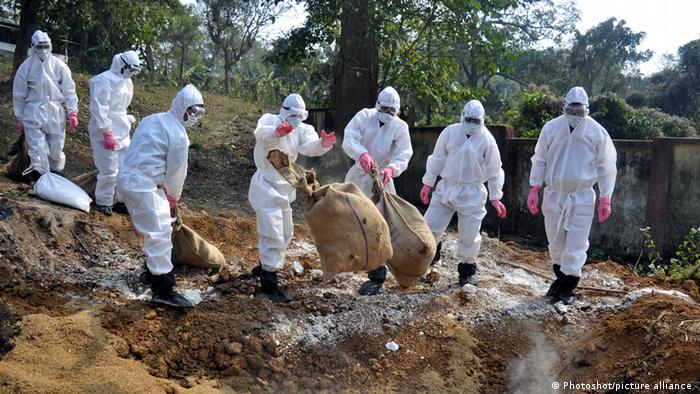 Health officials bury culled chickens at a poultry farm on the outskirt of Agartala, capital of the northeastern state of Tripura

Officials first detected the H5N8 strain of the virus in January after dead fowl and wild birds were found in several parts of the country.

Most of the dead were Central Asian high-altitude bar-headed geese — one of the world's highest-flying birds — that migrate to South Asia during the winter season.

The H5N8 subtype has spread to different parts of the world since early last year. It has also affected several countries in Europe, including France, where thousands of chicken and other poultry have been culled.

India too has announced the culling of poultry and wild geese. Officials said the flu has spread in India mainly through migratory birds. The virus can spread to cats, dogs and other mammals as well.

India has witnessed bouts of devastating bird flu outbreaks in recent decades, most seriously in 2008, when millions of poultry were culled.

The fear of the virus has hit several cities across the country, leading to plummeting prices and sales of chicken, eggs and other fowl. Poultry sales have dropped even in states that have no reported cases of the disease.

While New Delhi announced a ban on the import of live birds, poultry chickens are being culled in Haryana and Madhya Pradesh and ducks in Kerala. Markets and shops selling poultry have been shut for a week in seven Madhya Pradesh cities and the Uttar Pradesh government has announced a temporary closure of the biggest wholesale poultry market in Ghazipur city.

"We are the ones who are at risk, those dealing with birds on a daily basis. Now, very few people are coming to buy poultry products. This has affected our earnings. Thankfully, people are still buying lamb, so we aren't left high and dry. But if this continues for a long time, we will suffer," said Ashfaq, a meat shop owner in the national capital region.

India's minister for animal husbandry, Giriraj Singh, said that it was safe to consume eggs and chicken that have been cooked up to 70 degrees Celsius (158 degrees Fahrenheit). According to the World Health Organization, the virus does not spread from person to person, and cannot survive at high temperatures.

The first outbreak of bird flu was reported in India in 2006, in the western states of Gujarat and Maharashtra. Subsequently, other states too reported cases of the flu. But there were no cases of human infection. India had previously declared itself free of bird flu in September 2019.

The Supreme Court has called on the government to allow doctors at the coronavirus frontline to go on leave. Judges said doctors risk suffering a range of mental health issues under the strain of the pandemic.