A large fire has damaged part of the idyllic Austrian lakeside town of Hallstatt. Tourists have been warned to steer clear while the cleanup commences. 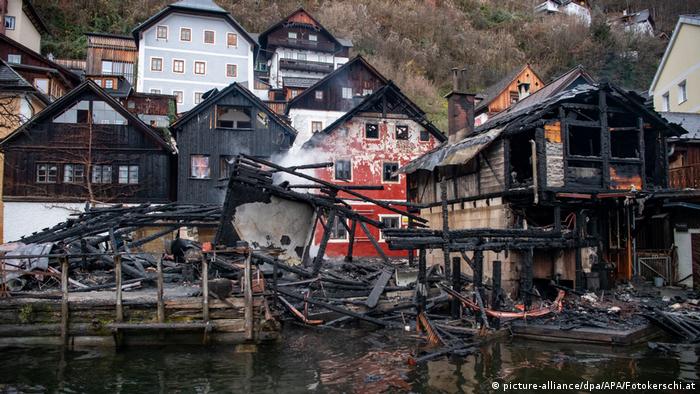 At least four buildings were heavily damaged by a fire in the Austrian tourist town of Hallstatt on Saturday.

A fire broke out in a wooden hut and then spread to a shed and two residential buildings in the UNESCO World Heritage-listed town.

A firefighter was injured while responding to the fire, but the residents got away safely. Eight fire trucks and 109 firefighters were reportedly on hand to tackle the blaze.

Hallstatt is one of Austria's most popular tourist destinations, with more than 1 million visitors each year, particularly from Asia. On some days, up to 10,000 people visit the town.

Fewer than 800 permanent residents live in Hallstatt, which is nestled between mountains and water. The scenic town is the site of the world's oldest salt mine and has developed an international following for its picturesque half-timbered houses and idyllic setting.

The town mayor warned tourists not to visit in the aftermath of the fire to allow the investigation and cleanup to proceed without interference. The road into Hallstatt remained closed to vehicle and pedestrian traffic, the Austrian daily Der Standard reported.

The countries announced in 2017 that they would withdraw from the UN Educational, Science and Cultural Organization, accusing it of bias against Israel. That went into effect at the stroke of midnight. (01.01.2019)