Some 80,000 people took to the streets in Vienna to protest government plans to allow the working day to be extended to 12 hours. Despite calls for a referendum on the issue, the proposal is expected to pass. 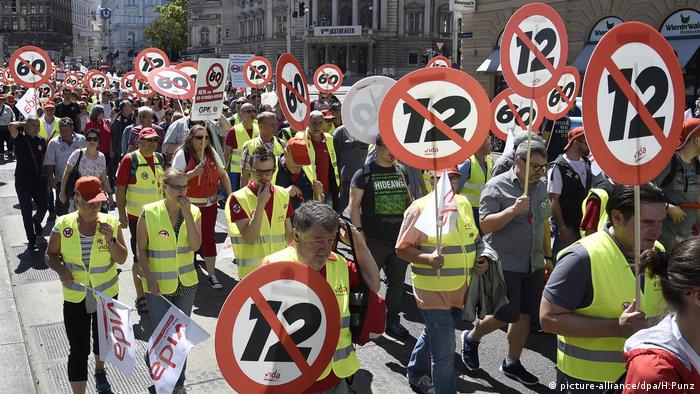 Tens of thousands of people in Vienna packed the streets on Saturday to voice their opposition to loosening labor laws to allow for a 12-hour workday and subsequent 60-hour workweek.

Police in Vienna said some 80,000 people took part, while the trade unions that organized the protest said some 100,000 people attended.

"We will resist with all means at our disposal," Wolfgang Katzian, president of the Austrian Trade Union Federation (ÖGB), told the crowd.

Katzian called on the Austrian government to let voters decide on the 12-hour workday issue in a referendum.

Currently, Austria has an eight-hour workday and a 40-hour workweek; however, there's a provision in place allowing companies to have their employees work up to 10 hours a day and up to 50 hours a week.

It was the first mass demonstration to take place since Austrian Chancellor Sebastian Kurz entered office at the end of 2017.

The right-wing government, comprised of Kurz's conservative People's Party (ÖVP) and the far-right Freedom Party (FPÖ), argued that the changes to the labor laws are needed in order to give businesses more flexibility.

Kurz's government had to roll back certain provisions in their draft law after a heated debate broke out with the opposition over the permitted reasons employees could provide to refuse to work more than 10 hours per day.

The government eventually backed down and said employees will be allowed to refuse to work overtime without giving a reason.

The draft law is expected to be passed by parliament on Thursday.

Germany's leading council of economic experts says that the current rules governing work are obsolete and inflexible. But if the labor code is rewritten, will working people lose crucial protections? (12.11.2017)

We are born, we work, we die - and sometimes forget to live in between. Companies are now finding novel ways of structuring the workday that give employees more space to breathe. Idealistic folly or business revolution? (13.03.2017)