Austria not waiting for a European solution | Europe| News and current affairs from around the continent | DW | 24.02.2016

Austria not waiting for a European solution

The EU continues to dither with its response to the refugee crisis, but Austria has decided not to wait any longer. The Balkan conference in Vienna was about making agreements on controlling the influx of refugees. 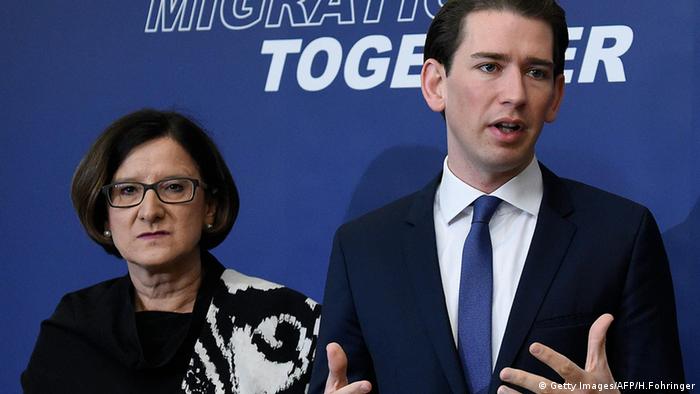 Wednesday's conference was called on short notice, an Austrian message to Greece and the European Union. Austrian Foreign Minister Sebastian Kurz (above right) said if Greece refused to protect the EU's external borders and continued to let refugees travel to Europe, and the EU still had no common solution for the problem, Austria had no choice but to deal with the situation on a national level.

Interior and foreign ministers from Albania, Bosnia-Herzegovina, Bulgaria, Kosovo, Macedonia, Montenegro, Serbia and Slovenia were invited to the one-day conference.

"We invited all of the countries along the Balkan route that will be affected by our decision," said Kurz.

"We want to slow the influx. So far, refugees have been brought to Central Europe. Now we simply cannot keep up with the numbers. We have set a limit of 37,500 for this year; that is still a lot compared to other European states," said Kurz.

"Germany has to decide what signals it wants to give. They are still signaling an open-door policy toward Greece, but they expect Austria to stop the influx. Those are two very different signals," said Austrian Interior Minister Johanna Mikl-Leitner (above left).

Greece was not invited to the Vienna conference, prompting harsh criticism from Athens. Politicians there are fearful of decisions that will worsen the already tense situation at Greece's border with Macedonia.

Kurz also addressed that fact on Wednesday in Vienna. "There has been no shortage of meetings, but there is a shortage of will to stop the influx. We met today, and all of us here are working toward a common goal: We want to reduce the flow," he said.

With this in mind, parties in Vienna discussed the efficient identification and registration of refugees, with the goal of only letting those people truly in need of protection travel to Central Europe. To that end, Austria has offered police assistance to Macedonia, and the number of Austrian police officers stationed at the Macedonian border will be increased from six to 20.

A central office at the Interior Ministry in Vienna, tasked with coordinating police efforts to take action against human traffickers on a European level, is set to open on April 1. 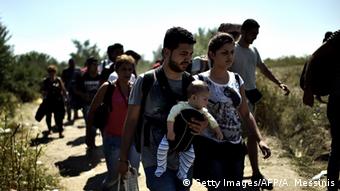 With winter nearly over, more refugees are expected

Understanding in the Balkans

In general, the interior and foreign ministers invited to the conference were sympathetic to Vienna's plans. "If all the countries that have taken in refugees so far have reached their capacity, then we have a serious problem," said Macedonian Foreign Minister Nikola Poposki.

"At the moment, we have about 7,000 refugees that want to continue on to Serbia, and at least 5,000 people on the Greek side of the border. They are not in a life-threatening situation, but there is still a great amount of pressure on Macedonia, and we are very thankful for Austria's help," he said.

Slovenian Interior Minister Vesna Györkös Znidar also criticized the EU and Greece, and voiced support for Vienna's approach. "The Schengen Area must also work in the future. Slovenia cannot become the victim of uncoordinated policies in the north," she said.

Serbian Interior Minister Nebojsa Stefanovic agreed. "If Austria, Germany and Sweden don't close their borders, then neither will we," he said.

"Improvements with registration are necessary. Firstly, it is a major undertaking, and secondly, refugees, who have already suffered enough, should not be subjected to this procedure in each country that they enter," he added.

Greek PM Alexis Tsipras has said he will block all EU refugee decisions if his country has to deal with the crisis alone. His comments come as Austria and West Balkan states decide to tighten their borders to migrants. (24.02.2016)

Austria's new daily cap on refugees has come into force. The move, which allows a maximum of 80 migrants a day to seek asylum, has been criticized for being 'plainly incompatible' with EU laws. (19.02.2016)