Heinz-Christian Strache is also the former chair of the far-right Freedom Party. The court found that a €10,000 donation to his party helped swing the law in favor of a private clinic. 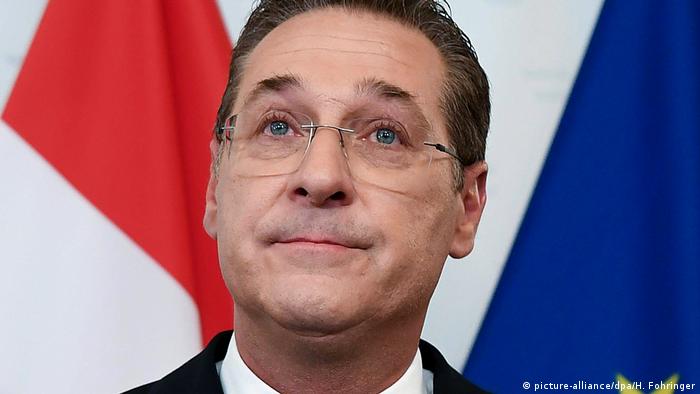 Strache was caught up in the so-called Ibiza affair, a 2019 scandal that brought down the governing coalition that included his far-right party

Austria's former vice chancellor and far-right politician Heinz-Christian Strache was found guilty of corruption and received a suspended 15-month jail sentence on Friday over a donation to his populist Freedom Party (FPÖ).

The trial is the first criminal case against Strache in the "Ibiza affair," where he was secretly filmed offering to help a woman posing as a wealthy Russian donor in return for political favors.

What was the court's ruling?

Strache was found guilty of corruption and given a 15-month suspended sentence.

He faced trial alongside Walter Grubmüller, the owner of a private clinic, who made an illegal €10,000 donation to the party.

Prosecutors argued that the donation was an attempt to buy a change in the law in order to allow the clinic's operator to charge medical treatment costs directly to the Austrian public health insurance fund.

Strache had testified that he believed the clinic was being treated unfairly by the state and that the party donations had nothing to do with the matter.

The judge ruled that the donation influenced a change in the law, alongside private perks in favor of the clinic.

Both sentences can be appealed.

Also examined were alleged trips made by Strache to the Greek island of Corfu at the invitation of Grubmüller, who is a longtime friend.

Strache has denied traveling to the island after he became vice-chancellor.

The trial was an outgrowth of the sprawling investigation into the FPÖ's financing that was prompted by the Ibiza affair.

Who is Heinz-Christian Strache?

Heinz-Christian Strache is a far-right politician and former head of the populist Freedom Party.

He was also Austrian vice chancellor from December 2017 until May 2019, under a coalition with the conservatives.

The coalition collapsed due to a secret video scandal known as the "Ibiza Affair."

What was the Ibiza affair?

The scandal broke when video footage emerged of Strache promising public contracts to a woman posing as a Russian oligarch's niece in exchange for support for the FPÖ's 2017 election campaign.

The video, which was secretly filmed on the Spanish resort island of Ibiza, brought down the coalition between the FPÖ and the center-right People's Party of Chancellor Sebastian Kurz and triggered fresh elections.

It also led to an investigation by anti-corruption prosecutors who turned up several other allegations of wrongdoing against Strache and other prominent politicians.

Prosecutors have confirmed an investigation against the ex-leader of far-right FPÖ party, Heinz-Christian Strache, on suspicion of embezzling party funds. Strache was forced out of government over the "Ibiza" scandal.