Austria defies US, EU over South Stream during Putin visit

Austria's OMV and Russia's Gazprom have signed a deal for the Austrian section of the controversial South Stream gas pipeline that bypasses Ukraine. Austria's president, Heinz Fischer, has rejected US and EU criticism. 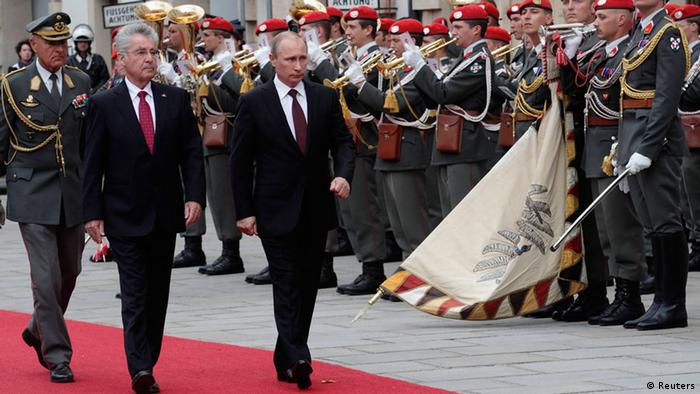 Austrian energy company OMV and Russia's Gazprom signed a contract on Tuesday for the construction of the South Stream pipeline's Austrian section.

It came just hours before Russian President Vladimir Putin arrived in Vienna for a one-day visit.

While OMV general director Gerhard Roiss said the South Stream pipeline would "ensure energy security for Europe, particularly for Austria," the US embassy in Vienna launched a thinly veiled attack on the move.

In a statement, it said that trans-Atlantic unity had been essential in "discouraging further Russian aggression" and that the Austrians "should consider carefully whether today's events contribute to that effort."

In a meeting with Austrian president Heinz Fischer, Putin slammed the criticism by saying that "our American friends... want to supply Europe with gas themselves. They do everything to derail this contract..."

Fischer also defended the project, stating that "no one can tell me why... a gas pipeline that crosses NATO and EU states can't touch 50 kilometers (31 miles) of Austrian territory."

While Austria is a member of the EU and should, therefore, endorse the bloc's visa bans and asset freezes against Russia, Fischer said on Tuesday that he opposed sanctions against Moscow. But he also told Putin Moscow's annexation of Crimea violated international law.

South Stream, which will cost an estimated $40 billion (29.4 billion euros), is designed to carry Russian gas to the center of Europe. Russia currently supplies a third of Europe's gas. The pipeline bypasses the current transit route through Ukraine and would make Europe even more dependent on Russian gas, critics say.

The EU Commission says South Stream as it stands does not comply with EU competition law because it offers no access to third parties. The EU also objects to the fact that Gazprom will control both the pipeline itself and the gas supply.

The pipeline will stretch across Russia, under the Black Sea and then through Bulgaria, Serbia, Hungary and Slovenia to Austria.

Gazprom's partners for the offshore part of the project are Italy's ENI, Germany's Wintershall Holding and France's EDF.

Bulgaria has yielded to pressure from Europe and indefinitely halted work on the Russian gasline project South Stream. But experts believe the decision may do more harm than good for the government in Sofia. (12.06.2014)

The failure of gas negotiations between Ukraine and Russia is a sign that the European Union just wanted to moderate rather than lead during the talks. The EU must show more leadership, writes DW's Ingo Mannteufel. (17.06.2014)

Construction of the new South Stream gas pipeline has begun. It will transport Russian gas to 38 million households in southern Europe starting 2015. (07.12.2012)