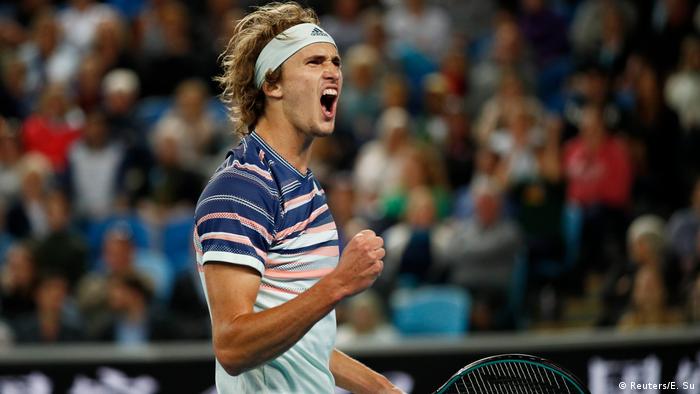 Despite his immense promise and top tier ranking, Alexander Zverev hasn't always found the first hurdle at a grand slam easy to clear. The German, 22, has lost in round one of all four slams in his short career but had no such trouble in Melbourne, dispatching Italy's Marco Cecchinato 6-4, 7-6 (7-4), 6-3.

But more than any of his winners, Zverev drew his biggest round of applause for his words in the post match interview. In it, Zverev pledged $10,000 for every match he wins in Melbourne to the campaign for individuals and communities affected by bush fires that have been ravaging Australia.

The German added that should he claim a first grand slam title, he would donate all his winnings to the cause. "I know I'm not the favorite to win this event but if I win this event I'm going to donate every single cent to the bushfires," Zverev said.

The winner recieves 4.12 million Australian dollars (2.83 million US dollars, €2.55 million) and Zverev will face Egor Gerasimov of Belarus or Norway's Casper Ruud in the second round.

Kerber, who turned 32 last Saturday, had a few alarms early on against her hard-hitting young opponent but a run of eight consecutive games straddling the two sets saw her through.

She too has struggled with early grand slam exits in recent years, falling at the first hurdle in the French Open and US Open in 2019. But she has a favorable draw down under this time round, with Australian wildcard Priscilla Hon, ranked 139 in the world, awaiting in round 2.

Angelique Kerber: Is this the beginning of the end?

Angelique Kerber's first round US Open exit marks the end of a dreadful Grand Slam year for the 2018 Wimbledon winner. The German has only been past the second round once in 2019, but is her decline terminal? (27.08.2019)

Alexander Zverev looking to put a difficult year behind him

At the ATP Finals in London one year ago, Alexander Zverev achieved the greatest success of his young tennis career. Now he's back as defending champion, but he is not among the favorites. (11.11.2019)

Toxic air meant practice sessions were halted as players Alexander Zverev and Rafael Nadal warmed up for the first major of the year. Organizers remain confident the event will start on time, in less than a week. (14.01.2020)