Cambodia's top court has rejected an application for bail for an Australian filmmaker accused of espionage and endangering national security. James Ricketson could face up to 10 years in prison if convicted. 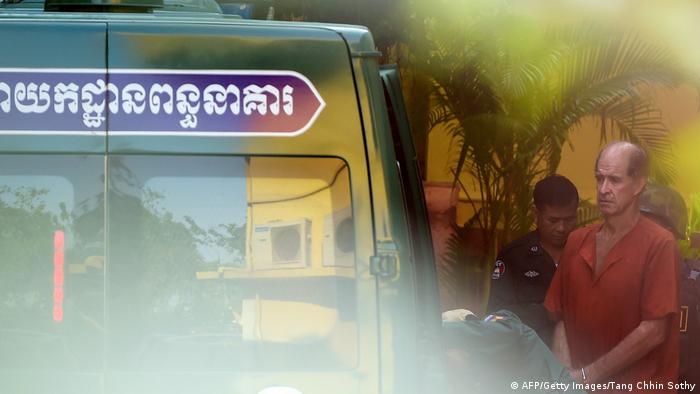 Cambodia's Supreme Court on Tuesday ruled to keep Australian filmmaker and journalist James Ricketson behind bars. He was arrested last year after flying a drone over an opposition party rally.

The 68-year-old's case comes amid a wider crackdown on freedom of speech by the government of Prime Minister Hun Sen ahead of elections in July.

The case so far

- Ricketson was arrested in the capital Phnom Penh on June 3 after he was photographed flying a camera-loaded drone over a campaign rally for the Cambodia National Rescue Party (CNRP).

- He was charged "with acts of collecting information which may undermine national defense," which is punishable by up to 10 years in prison.

- Presiding judge Soeng Panhavuth said his bail request was rejected because "the investigation is still underway."

Ricketson's family said they were "very disappointed by the outcome of today's proceedings and in particular that the verdict, the denial of bail, was handed down in absentia," his daughter-in-law Alexandra Kennet told reporters.

She added that the family was concerned about the 68-year-old's health and the "incredibly cramped conditions" in the cell he is sharing with 140 other people.

Australia trying to secure his release: A petition in Australia calling for his release has garnered around 66,000 signatures. Australia's Department of Foreign Affairs and Trade said that it was providing consular assistance to the filmmaker.

Long-term expat: Ricketson has lived in Cambodia for many years and often filmed the activities of the CNRP. He was believed to be making a documentary at the time of his arrest.

Crackdown on opposition: The CNRP was dissolved last year at the request of the government of Hun Sen, who has ruled Cambodia for 32 years. CNRP leader Kem Sokha was accused of plotting a US-backed coup — charges he says were politically motivated.

The leader of the dissolved Cambodian National Rescue Party made the call in a New Year's message read out by his daughter in a Facebook video. The CNRP was disbanded after being accused of planning a coup. (01.01.2018)