An 11-month-old baby born in Australia to asylum-seeker parents has been denied a refugee visa by the country's Federal Court. The ruling throws further light on Canberra's hardline and controversial immigration policy. 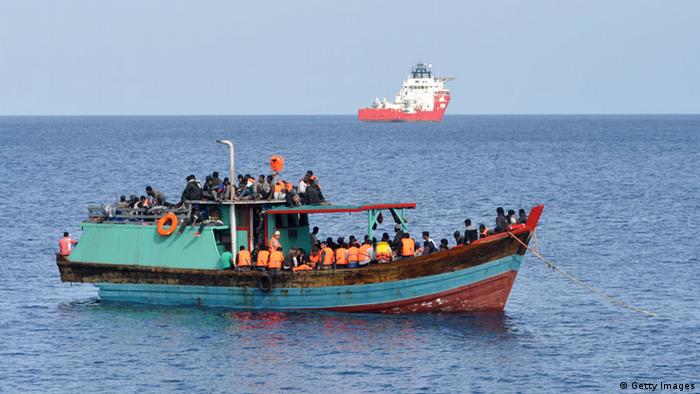 Baby Ferouz Myuddin was born prematurely in hospital in the eastern Australian city of Brisbane last year. His mother, from Myanmar's persecuted Rohingya minority, was transfered there from a detention center on the Pacific state of Nauru because of health concerns.

The Australian government initially rejected the baby's refugee application, on the grounds he was an unauthorized maritime arrival, like his parents. Lawyers challenged that ruling, disputing that anyone born in an Australian hospital could have arrived by sea.

But their challenge was unsuccessful. On Wednesday, Federal Court judge Michael Jarrett agreed with the government's course of action, ruling that Ferouz had entered Australia by sea - despite the circumstances of his birth.

"On the applicant's birth he entered Australia and became an 'unlawful non-citizen', given that neither of his parents held a valid visa," Jarrett said in his judgment in Brisbane. "The application is therefore, in my view, an 'unauthorized maritime arrival'...and his application for a protection visa was invalid."

Ferouz was one of around 100 babies born in similar circumstances represented by the Maurice Blackburn Lawyers firm in Australia, meaning his case was keenly observed as a possible precedent.

Lawyers for Ferouz's parents said the family was "distressed" but respected the decision of the court.

"All they have continued to seek for Ferouz is a fair go: Ferouz was born in Brisbane and has a Queensland birth certificate, and we remain firmly of the view that on that basis, he should have the right to seek protection in Australia," said Murray Watt from the law firm Maurice Blackburn.

"Unfortunately, the court's decision means that Ferouz is not eligible to apply for a Protection Visa and he and his family are now able to be transfered to detention on Nauru," Watt said. "Amendments to the Migration Act, which are currently before Federal Parliament, would result in the transfer of all babies to Nauru, despite being born on Australian soil."

The High Court in Canberra began hearing another case on Tuesday, on the validity of a law used to detain 157 Sri Lankan Tamil asylum-seekers for weeks at sea in June. They had sailed from India, but are now in a detention camp on Nauru.

The group's lawyers say their clients were falsely imprisoned on the ship. The government says the detention was legal, as was a plan to send them back to India.

At the heart of the case is whether Australia has the power to remove asylum seekers from its contiguous zone, just outside territorial waters, and send them to other countries.

Under Australia's immigration policy, refugees arriving by boat since July 2013 have been sent to camps on Manus Island in Papua New Guinea and to Nauru - another camp is soon to open on Cambodia.

Refugees in these camps do not qualify for temporary Australian visas and instead are offered resettlement in these countries. Since December, only one boat of asylum seekers is known to have reached the Australian mainland - compared to almost daily arrivals under the previous Labor administration.

The current government, led by conservative Prime Minister Tony Abbott of the Liberal Party, was elected in part on the promise that it would not allow more boats carrying asylum seekers to land in Australia. The government says it wants a regional solution to the issue of asylum seekers, and asserts that many of those trying to reach its shores are economic migrants.