Australia will hold new elections in May

Prime Minister Scott Morrison moved to dissolve parliament and call for new elections. The conservative leader will face a challenge from center-left Labor leader Bill Shorten, who currently leads in the polls. 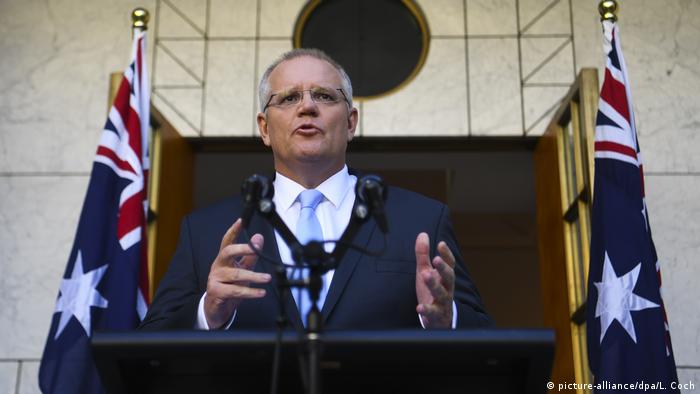 Australian Prime Minister Scott Morrison announced on Thursday that fresh parliamentary elections will be held on May 18.

The vote will present a challenge for the conservative government, which will seek a third term in office.

Morrison made the announcement after holding a meeting with Governor General Peter Cosgrove to dissolve parliament and plan the vote. Cosgrove represents Britain's Queen Elizabeth II, Australia's head of state.

Some 16 million Australians will be eligible to vote, with 151 seats in the House of Representatives up for grabs. Voters will have one week to register for the election, in which voting is compulsory.

'Best country in the world'

The 50-year-old conservative leader came to power in August last year through an intra-party revolt that ousted Prime Minister Malcolm Turnbull, who himself had toppled the more conservative Tony Abbott in a similar way in 2015.

Morrison's message to voters this campaign season has focused narrowly on the economy. "We live in the best country in the world," Morrison said as he announced fresh elections.

Meanwhile, the center-left Labor party, led by Bill Shorten, has sought to target centrist voters who are frustrated with a hardliner like Morrison, when they originally voted for a moderate Turnbull. The Labor party has also cast Morrison as culturally out of touch and a friend of the wealthy.

The two parties will go head-to-head on critical issues such as climate change, where the Labor party will position itself as the more environmentally friendly of the two.

Australia is the world's largest exporter of coal and is one of the world's worst greenhouse gas emitters on a per capita basis.

But both candidates will have an uphill battle with voters. They each suffer from low favorability ratings and are seen by voters as smug, arrogant and untrustworthy, according to recent polling.

A YouGov Galaxy poll, published by the newspaper Daily Telegraph, showed that some 28 percent of voters would rather back a minor party than either top contender.

Still, former union leader Shorten is closer than ever to becoming prime minister, as his party is currently ahead of the conservatives, according to current polling.

The human remains of a Yidinji king are going back to Australia 130 years after they came into German possession. Australia has described the handover, one of three set to take place in April, as a record return. (09.04.2019)

Inspectors said there wasn't enough food for the crew and there had been no shore leave for weeks. It is not the first time the German shipping company has been accused of scrimping. (27.03.2019)

Australia's government plans to censure a far-right senator who claimed Muslim immigration was to blame for the New Zealand mosque attacks. The Islamophobic comments also caught the attention of a teenager with an egg. (16.03.2019)