New South Wales Police have detained a 20-year-old on suspicion of starting a blaze. Fires in the region have so far caused more than a million hectares of damage, with no end in sight, according to authorities. 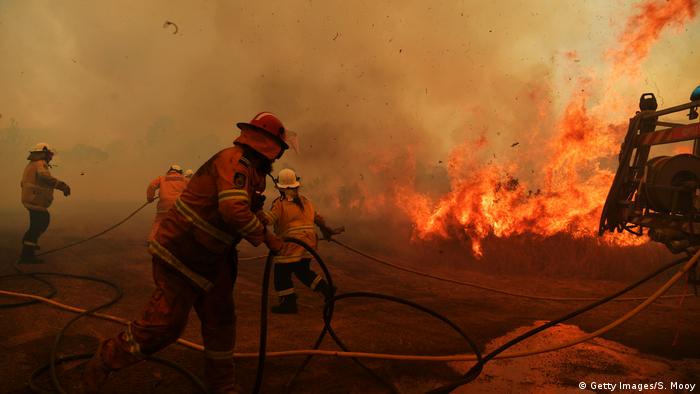 Police arrested a man on Thursday who reportedly started a fire in Wollongong, 80 kilometers (50 miles) south of Sydney, as blazes continue to rage across eastern Australia.

New South Wales Police released a statement saying that while "responding to a paraglider trapped in a tree" a man was arrested "who allegedly started a fire in nearby bushland."

Authorities had been deployed to rescue a 61-year-old man in the suburb of Balgownie, but when they arrived at the scene, officers noticed the smell of burning.

"As the rescue operation progressed," the statement read, "officers on scene smelled smoke and went on foot to investigate, discovering the bushland nearby on fire."

"Police will allege a 20-year-old man was seen fanning the flames and he was arrested."

The individual was granted bail and will appear in court on December 3.

The statement concluded that authorities "attended and extinguished the blaze within the hour; however, about 150 square meters of bushland had already been destroyed."

More than 1.1 million hectares of land have already been affected in Australia's most populous state and the death toll increased to four after a corpse was found in a burnt-out forest near the town of Kempsey. He is thought to be a 58-year-old man who lived in a shed and had not been seen in almost a week.

The states of New South Wales and Queensland recently declared a state of emergency as Rural Fire Service Commissioner, Shane Fitzsimmons, said it would be "many weeks" before the fires are under control.

Authorities have said some of the fires may have been ignited on purpose, due to reports of suspicious behavior.