Australia fires will not be contained for 'many weeks'

The bushfires that are raging across eastern Australia destroyed more than 50 homes and injured 13 firefighters on Wednesday. Without rain, officials warn there is little chance of the fires abating any time soon.

Bushfires in eastern Australia destroyed more than 50 homes and injured 13 firefighters on Wednesday, according to officials.

150 fires were burning across the states of New South Wales and Queensland. Police ordered more mass evacuations, including the population of the popular tourist destination of Noosa, north of Brisbane. Firefighters told people to "leave immediately."

"Conditions are now very dangerous and firefighters may soon be unable to prevent the fire advancing," Queensland Fire and Emergency Services said in a statement. "The fire may pose a threat to all lives directly in its path."

A helicopter also crashed while fighting fires in the north of the region, though the pilot managed to escape with only minor injuries.

A property owned by Australian actor Russell Crowe was also affected. Crowe tweeted a video of a helicopter dropping water near his home with the caption "Top shot son!"

Despite the widespread damage, there have been no further fatalities since Friday and many people expressed gratitude that the fires have not caused more deaths.

"I have to confess to being hugely relieved this morning that yesterday our amazing volunteers and emergency service personnel withstood the catastrophic conditions and did manage to save life and property," New South Wales premier Gladys Berejiklian told reporters late on Tuesday. 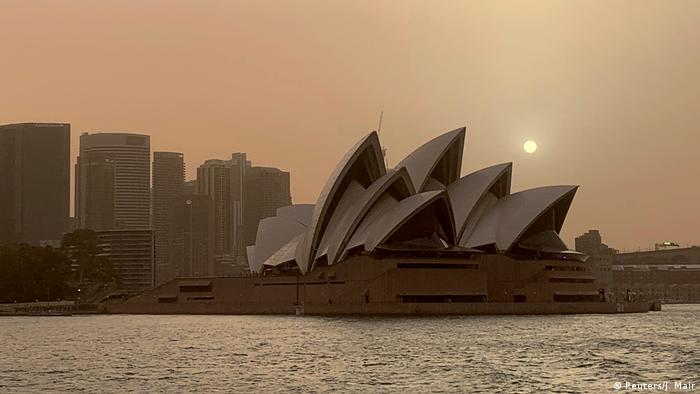 Smoke from the wildfires over Sydney

Will things get worse?

Officials remain fearful that the fires will continue to get worse in coming days and weeks.

"We will not have all these fires contained and locked up for many, many weeks," said Shane Fitzsimmons, New South Wales Rural Fire Service Commissioner.

"Unfortunately, what we need is rain, and there is certainly nothing in the forecast for the foreseeable future that's going to make any discernible difference to the conditions that we are experiencing."

So far the fires have claimed three lives and destroyed 125,000 square kilometers (48,250 square miles) of farmland and bush.

Wildfires continue to burn unabated in eastern Australia. Vast swathes of forest have been destroyed. Local fire authorities say they have never fought a blaze on this scale (13.11.2019)

Thousands of people have been ordered to evacuate following warnings of flash floods and landslides amid heavy torrential rain.

Seventeen people have now died due to recent severe rain and flooding in Australia. The poor weather conditions have disrupted recovery and cleanup efforts.