The athletes' association urged the International Olympic Committee to "take a strong stand," after Navid Afkari was put to death over his participation in 2018 protests. Tehran insists he killed a security officer. 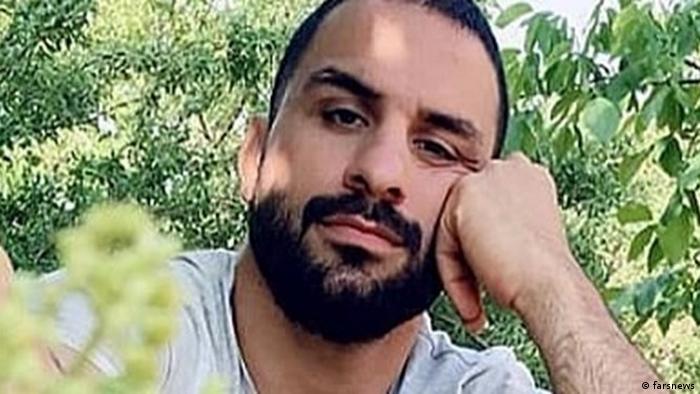 Athletes Germany on Sunday called for sanctions against Iran in the wake of the execution of Navid Afkari, an Iranian professional wrestler, for his participation in anti-government protests in Iran.

"His execution must not be without consequences," the statement said. "We expect the International Olympic Committee (IOC) and United World Wrestling (UWW) to take a strong stand against human rights violations of athletes ... This also includes establishing an appropriate sanction mechanism."

The statement was issued just a day after Afkari was buried, hours after his execution.

Human rights activist Mehdi Mahmudian, who is also a friend of the Afkari family, tweeted that Afkari was laid to rest amid tight security in the southern village of Sangar.

Afkari, 27, was put to death at Adel-Abad prison in the southern city of Shiraz on Saturday, accused of killing a security officer during a demonstration in the city in 2018.

Iran said he confessed but the wrestler, his family and human rights organizations say the confession was obtained through means of torture.

"We Iranian people are furious because the Islamic Republic killed one of us for the crime of protesting and this is not acceptable in the 21st Century," tweeted Voice of America reporter and activist Masih Alinejad.

In addition to Athletes Germany, several other athletic organizations and public figures have called for sanctions in response to Afkari's execution.

"We call on athlete solidarity to demand that the International Olympic Committee and United World Wrestling immediately implement sanctions that expel Iran from world sport for this heinous execution," Global Athlete, another athletic advocacy organization, said in a statement.

"There was a very, very late statement made by the human rights commissioner," Nouripour told TAZ newspaper. "For this statement I am grateful, but officially there was nothing more from the government," he said.

Afkari's death sentence earlier this month spurred an international outcry, including condemnation from US President Donald Trump. The protests that Afkari participated in, began in December 2017 to speak out against the government's economic and social policies.

The demonstrations saw mass internet blackouts throughout the country, triggered by internet service providers controlled by the Iranian Revolutionary Guard, along with official pledges to crack down harshly on those involved.

Afkari's supporters say that he was especially being targeted as a high-profile athlete who openly criticized the Iranian regime.

IOC will not ban Iran

The International Olympic Committee (IOC) has said that it will not attempt to ban Iran from the Olympic movement despite international dismay at the action.

In a statement the IOC said excluding Iran would "punish athletes" because of the political system they happen to live under.

"The difficulty for us is this execution didn't relate to a sporting event," IOC vice president John Coates is reported as saying by the Sydney Morning Herald newspaper. "And the other difficulty is of course that there is probably 50 of the national Olympic committees that come from territories that still have capital punishment."

IOC calls on sports federations to exclude Russia and Belarus 28.02.2022

The IOC has called on sports federations to exclude Russian and Belarusian athletes from international events. This is the latest response from the sporting world to Russia's invasion of Ukraine.

It's eight months since the Taliban took control of Afghanistan and the country has slipped down the news agenda. 'The world forgets about us,' says Friba Rezayee, the first Afghan woman to compete at the Olympics.