Assad: Aleppo win would be 'huge step' to end war

Reclaiming Aleppo would not conclude the war, but it would be a key move towards the end, Syrian President Bashar al-Assad told the daily "Al-Watan." He added that chances for a truce were "practically non-existent." 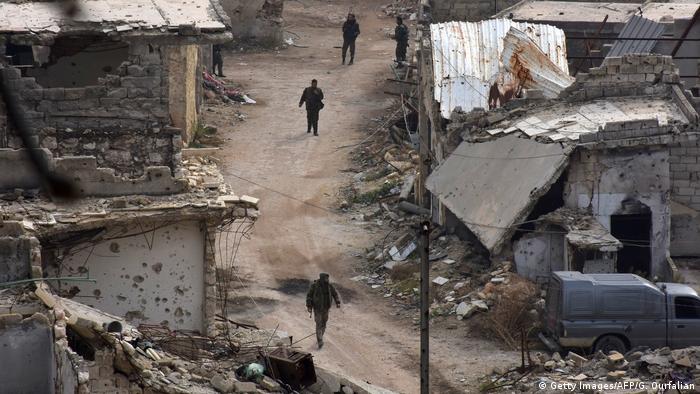 Syrian troops are shown on an Aleppo street on December 5

The upcoming regime victory in Aleppo will change the course of the war in Syria, the country's president, Bashar al-Assad was quoted as saying on Wednesday.

"The decision to liberate all of Syria is taken and Aleppo is part of it," he said, according to the pro-Damascus TV station "al-Mayadeen," which cited an interview with the newspaper "Al-Watan" set to be published the next day.

Syrian government forces currently control about 80 percent of former rebel territory in eastern Aleppo. The remaining rebel fighters face an increasingly desperate battle, with the Syrian army and its allies continuing their three-week offensive. On Wednesday, troops loyal to Assad drove the rebels from the Old City, the historic heart of the Syrian metropolis.

Aleppo is the last major rebel stronghold to hold out after more than five years of war in Syria. However, Assad said he believed the fighting would continue even after the city is won.

"It's true that Aleppo will be a win for us, but let's be realistic - it won't mean the end of the war in Syria," he told Al-Watan.

"But it will be a huge step towards this end," he added, according to a report by the AFP news agency.

Earlier on Wednesday, the Western countries and anti-Assad opposition forces demanded an "immediate" ceasefire on humanitarian grounds, to allow aid and medicine to enter Aleppo. 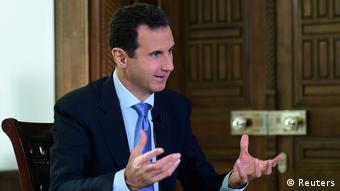 The war under Assad's presidency has killed more than 300,000

In the interview, however, Assad said that the chances for a truce were "practically non-existent, of course."

"The Americans in particular are insisting on demanding a truce, because their terrorist agents are now in a difficult situation," he commented.

"It looks like an attempt to buy time for the rebels to have a breather, take a pause and replenish their reserves," Lavrov said.

The Kremlin estimates that all the remaining rebels in east Aleppo are most likely associated with the extremist group formerly known as the Nusra Front, which had links to al-Qaeda.

"The exit was offered to them and this issue was discussed earlier," government spokesman Dmitry Peskov said, according to the Russian news agency TASS. "Unfortunately, only a few have exited."

While rebels still hold pockets of resistance across Syria, the loss of Aleppo would give Assad control over the four largest cities along with the key coastal region of the country.

Coronavirus: UK approves Pfizer-BioNTech vaccine, to roll out next week 4h ago