A group of international authors and artists launched an appeal to stop the mass killing in Aleppo and demonstrated their outrage against President Putin by demonstrating in front of the Russian embassy in Berlin.

Several hundred people rallied in front of the Russian embassy in Berlin on Wednesday. They were there to protest against "crimes against humanity perpetrated by the Russian government in Aleppo," the organizers said.

The small group of eight people who decided to launch the initiative last Thursday apparently didn't expect as many people to show up: They initially thought their rally would not obstruct traffic on Unter den Linden, the famous Berlin boulevard where the embassy is located.

However, much of the space on the small strip in the middle of the boulevard was occupied by construction work, and the street was rapidly blocked by the several hundreds of protesters.

A few pro-Russians also showed up for a counter-demonstration. 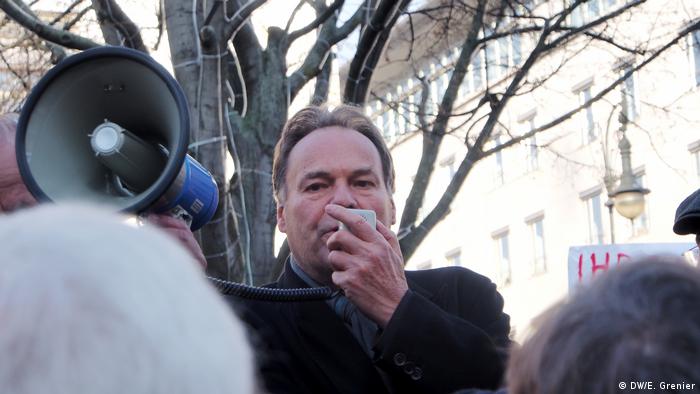 Among the speakers at the rally was German novelist Peter Schneider: "We're not here to solve the question of whose fault the conflict is; it's enough to know that 90 percent of the victims of the bombardments are civilians," he said. "What unites us is the outrage against this mass murder."

The author of "The Wall Jumper" and member of the German PEN group added that Putin's shameful actions in this massacre needed to be clearly declared.

Also present at the protest was filmmaker Volker Schlöndorff, best known as the director of "The Tin Drum." He was one of the prominent supporters of an appeal signed by international writers and intellectuals, calling for the world to react against Russia's role in the humanitarian crisis. It was published in six different languages through the website Authors for peace on December 5.

Some 50,000 people have fled eastern Aleppo

Some 50,000 people have fled eastern Aleppo

"To fulfill his dream of imperial greatness, President Putin has unleashed a murderous, all-out assault on the city of Aleppo. Having already razed entire districts to the ground, hospitals and schools are being deliberately targeted and the city's lifelines destroyed," the appeal states, adding "Putin's war of annihilation in Aleppo is outright mass murder!"

Russia considers the people living in the rebel-held enclave terrorists and Russian Foreign Minister Sergei Lavrov has announced they will be "eradicated" unless they withdraw.

The appeal asks why politicians, especially left-wing parties, are remaining silent after having condemned previous NATO military interventions. The authors also directly question the stance adopted by the right-wing populist party Alternative for Germany (AfD), which recently claimed to be "admirers of 'Great Leader' Putin." 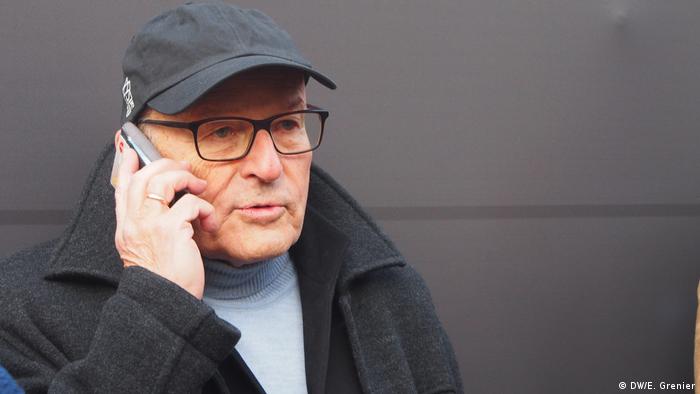 Asked if artists and authors could play a special role in such a complicated political conflict, Schlöndorff told DW, "I'm here today as a human being and a citizen - I simply see it as my duty." 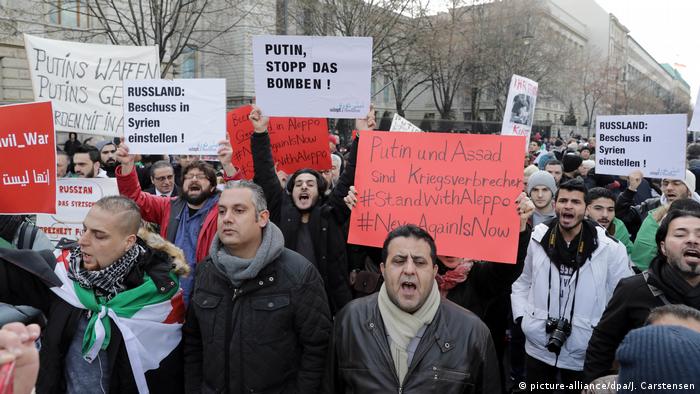 "Aleppo, Putin's shame" and "Stop bombing now!" could be read on many signs at the protest in Berlin

The United Nations held an emergency meeting Wednesday to address the ongoing crisis in Aleppo. The UN humanitarian aid chief warned civilians are facing a dire fate in the city's eastern districts. (01.12.2016)