Australia needed penalties to overcome Uzbekistan to reach the quarterfinals of the 2019 Asian Cup. Defender Takehiro Tomiyasu gave fellow favorites Japan the only goal they would need to beat Saudi Arabia. Defending champions Australia survived a scare from Uzbekistan in Al Ain on Monday, eventually prevailing in a penalty shootout to advance to the quarterfinals of the Asian Cup.

Brighton goalkeeper Matt Ryan was the hero of the day as he saved two penalties in the shootout, which finished 4-2 for Australia, after the two sides had gone scoreless through 120 minutes.

Hertha Berlin's Mathew Leckie, who was returning from a hamstring injury, buried the decisive kick to put the Socceroos into the next round, where they will face against either hosts United Arab Emirates (UAE) or Kyrgyzstan.

However, there was one sour note for the title holders as Tom Rogic picked up a yellow card, which will rule him out of the quarterfinal.

The Saudis had the better start in Sharjah but fell behind when defender Takehiro Tomiyasu, who plays his club football for Belgian side Sint-Truiden, headed home from a corner for Japan after 20 minutes.

Despite scoring six goals in their opening two group games in the UAE, the Saudis, who have won this tournament three times previously, struggled in front of goal, with Hatan Bahbri curling one effort just off target as he aimed for the top corner. 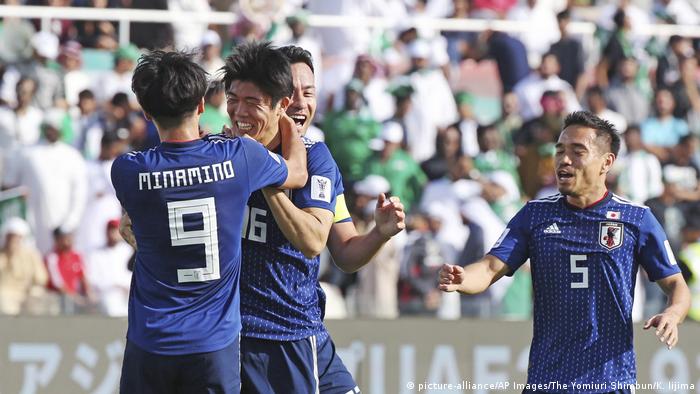 Former Mainz striker Yoshinori Muto almost doubled Japan's lead in the second half but his shot was blocked.

Haraguchi of Hannover played the full 90 minutes on the left wing while Werder Bremen's Yuya Osaka remained on the bench as Japan, who won the tournament in 1992, 2000, 2004 and 2011, progressed by the one goal. Japan are to face Vietnam in the last eight.

In the day's final match, the hosts, the United Arab Emirates (UAE), took advantage of a controversial extra-time penalty to beat Kyrgyzstan 3-2 in Abu Dhabi to advance. Substitute Ahmed Khalil blasted home from the spot in the first period of extra time to set up a meeting with the Socceroos in the last eight.

Australia have snatched a late winner against Syria to book their place in the round of 16. Elsewhere, Jordan topped Group B with a goalless draw against plucky Palestine. (15.01.2019)