Ashes from Chile’s Calbuco volcano have led to flight cancellations in Argentina and Uruguay. Activity has died down compared to Wednesday and Thursday, although authorities have not ruled out a further eruption. 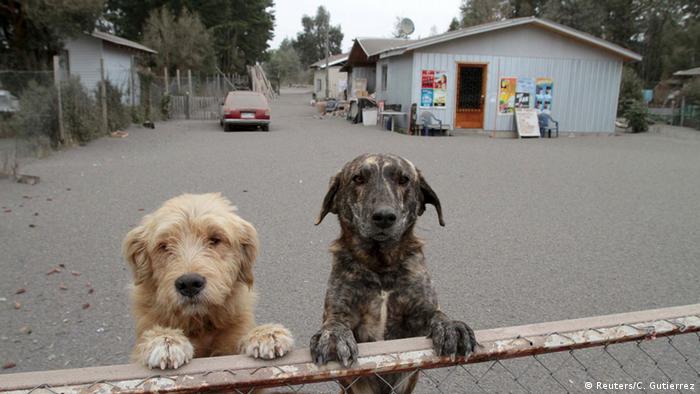 On Friday, Chile kept a wary eye on the 2,015-meter (6,650-foot) Calbuco after it spectacularly erupted earlier in the week for the first time in 43 years, forcing 4,000 people to evacuate. The volcano, about 1,000 kilometers (600 miles) south of the capital, Santiago, unexpectedly burst into life Wednesday with eruptions that sent a cloud of ash 15 kilometers into the sky.

"We're still in what is considered the crisis phase," Rodrigo Alvarez, the head of the National Geology and Mines Service, said on Friday. "We cannot rule out a new eruption."

In Ensenada, the town closest to Calbuco, the roofs of many buildings collapsed under the weight of a layer of ash, said residents who briefly returned on Friday to get their belongings and feed their pets (pictured). Calbuco now has six craters, four more than it had Tuesday.

Ash has disrupted flights across South America. Roughly 1,500 kilometers northeast of the volcano, Uruguayan officials canceled flights to and from the capital, Montevideo.

Carriers canceled departures to and from Europe and the US and rerouted flights already headed for Buenos Aires to alternative destinations. Several towns in Argentina's Patagonia region also lay covered in ash, and airports in Bariloche, Neuquen and San Martin de los Andes remained closed.

Chilean authorities evacuated a 20-kilometer radius around Calbuco, in Los Lagos, a region popular with tourists for its beautiful mountain landscapes dotted with volcanoes and lakes with black-sand beaches. President Michelle Bachelet, who flew to the affected area Thursday, has warned the situation remains "unpredictable." Calbuco caused alarm again early Friday, when it emitted a large puff of smoke.

Authorities have received no injury reports, but they warn that the ash could harm people, animals, crops and infrastructure, as well as contaminate the water supply. Officials in Chile and Argentina have handed out breathing masks and warned of the risk of flooding from hot lava melting snow and ice high in the mountains. Germany's Foreign Ministry has cautioned travelers to follow the instructions of local officials.

In recent months, Chile has suffered flooding in its arid north - the world's driest desert - and wildfires in southern forests. On March 3, the Villarrica volcano emitted a brief but fiery burst of ash and lava.

Calbuco erupted mildly in 1972, and more earnestly in 1961. Chile has dozens of active volcanoes.

Across the Atlantic, the potentially imminent eruption of an active volcano in the Congo is wreaking havoc in Africa. Iceland appears to be home to Europe's currently most troublesome volcanoes, with an eruption last fall leading to fears of the chaos created by Eyjafjallajokull in 2010, which stranded passengers and caused airlines to fork out millions in compensation.