The Canary Islands have become a destination for displaced Africans trying to reach the EU during the coronavirus pandemic. Authorities in Spain say they are overwhelmed, Jan-Philipp Scholz reports from Gran Canaria. 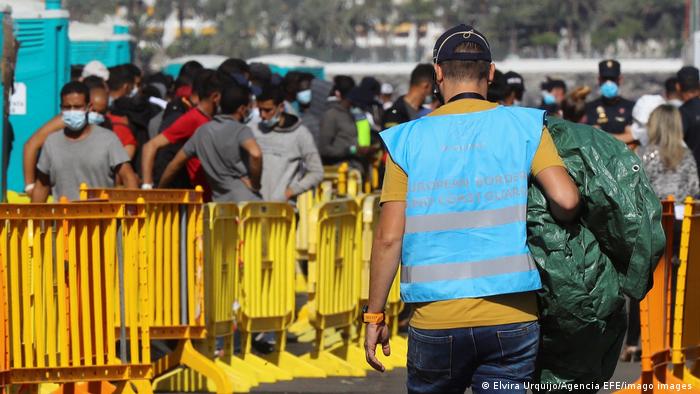 Photojournalists on Gran Canaria need a good telephoto lens these days if they're to capture the images of the displaced people arriving on the island. The Spanish authorities have put up a yellow plastic fence over 50 meters (165 feet) away from the tents of the central reception camp of Arguineguin. Several police buses have parked in front of it to stop any attempts by journalists to approach the camp at the harbor in the small coastal town of Mogan.

David Perdomo has been observing these developments for weeks — and he's getting increasingly frustrated. The Spanish journalist, who works for a local radio broadcaster, has personal experience of the way the authorities' information policy has changed. The more refugees arrive on the island, the more decisively the government has blocked all media inquiries.

Read more: 2020 was a lost year for relations between African countries and the European Union

Perdomo said the authorities were clearly using the strategy of "what we don't see doesn't exist." "But, he said, "the situation won't change or get better if we can't report about what's going on here at the harbor." 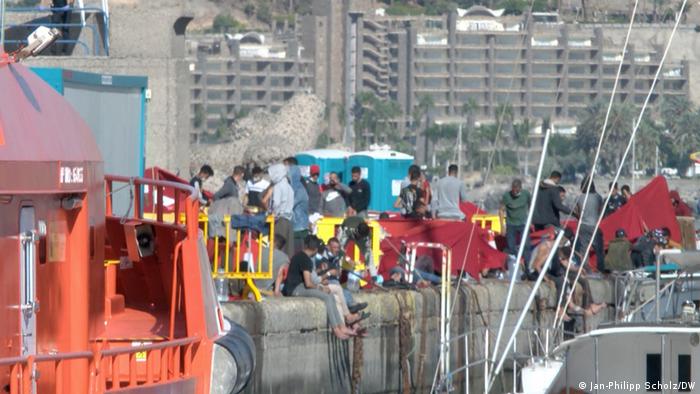 More than 2,300 displaced people are currently housed in the provisional tents on Gran Canaria, which have an intended capacity of just 400. Yet both the island's administration and the central government in Madrid could have done more to prepare for the arrival of these people in search of shelter. The majority of the refugees came to the islands just in the past few weeks — several thousand in the last weekend alone. But it's been obvious for a long time that migration has been on the rise. This summer, the number of Africans arriving on the Canary Islands was already seven times greater than during the same period last year.

In October, Matt Herbert, who researches North Africa and the Sahel with the Global Initiative against Transnational Organized Crime, told DW that he saw this as "the leading edge of the wave of COVID-19-driven irregular migration." He said the economic fallout of the coronavirus pandemic was forcing more and more people to leave their homes. At the same time, both the pandemic itself and migration agreements between Europe and the transit countries of North Africa meant that many traditional routes were now blocked, and alternative routes to Europe were becoming increasingly popular — including the Atlantic route, via the Canary Islands.

Read more: Why is Finland coping so well with the coronavirus pandemic?

But, though it appeared clear that more people were going to come, for a long time the Spanish government failed to act. The Canary Islands are experiencing the consequences of that failure. For days now, everyone in Chema Santana's office in the island's capital, Las Palmas, has been working flat out. Santana works for Gran Canaria's refugee council, but he too has been denied permission to visit the reception camp in Mogan. However, some of his colleagues were recently allowed in. What they described was shocking. "Everyone there has to sleep on the bare ground. Some are accommodated in the tents; others are sleeping out in the open," Santana said. His refugee council has been critical of the situation in the camp right from the start — "but we didn't think it would get this dramatic."

The NGO Human Rights Watch was also recently able to visit the camp. Its report contains a long list of violations of humanitarian principles. For example, unaccompanied girls and women traveling alone are not housed separately from other refugee groups, according to usual practice. The organization is particularly worried about the lack of sanitation measures in the midst of a pandemic. "The chaos there poses a real threat to people's rights, health, and safety," it concludes. 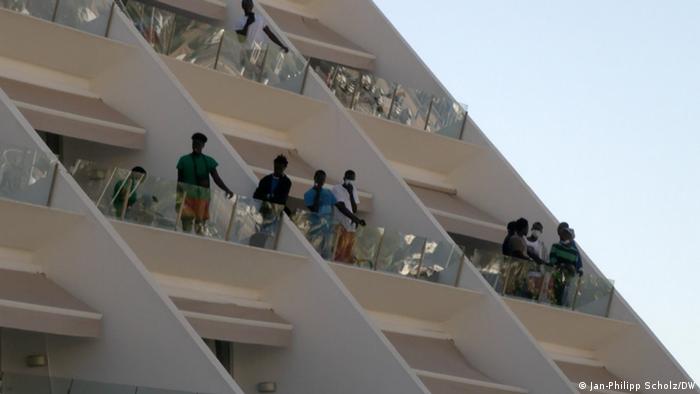 The government has now started distributing people to hotels in the region once they have initially been registered at the reception camp. Much of the local accommodation has been empty for months, as the coronavirus crisis has had a big impact on tourism. But this new policy is already creating resentment. Many locals fear that it will make it even less likely that tourists will return to the islands. Onalia Bueno, the mayor of Mogan, has had to mediate at a number of angry protests. The dedicated politician is visibly affected by the events of the past few weeks.

"So many politicians and representatives of international institutions have visited recently," Bueno said, "yet to date we still have no idea what our government's strategy actually is to get to grips with the crisis on the Canaries." Like many other politicians on the islands, she's demanding that at least some of the displaced people be transferred to the Spanish mainland.

Spain's central government remains vehemently opposed to this. Many of the migrants are from countries such as Senegal, Guinea and Morocco. They are considered to be so-called economic migrants, which means there's hardly any chance of them being granted right of residence. The government would rather send these people back to their homelands directly from the islands. Repatriation was suspended for a long time on account of the pandemic, but last week deportation flights to Mauritania started again.

At least there is some good news for the displaced people at the harbor of Mogan. More and more lawyers have been joining the journalists waiting outside the reception camp. Critics have raised their voices to demand that rights be respected — which include thorough explanations of EU asylum and immigration laws. The lawyers must also wait a while beyond the yellow plastic fence, but ultimately they're allowed to enter the camp.